The Trump administration is elaborating on a Mideast peace plan of trilateral or even quadruple land swaps, involving Israel, the Palestinians, Egypt and, possibly, Jordan. 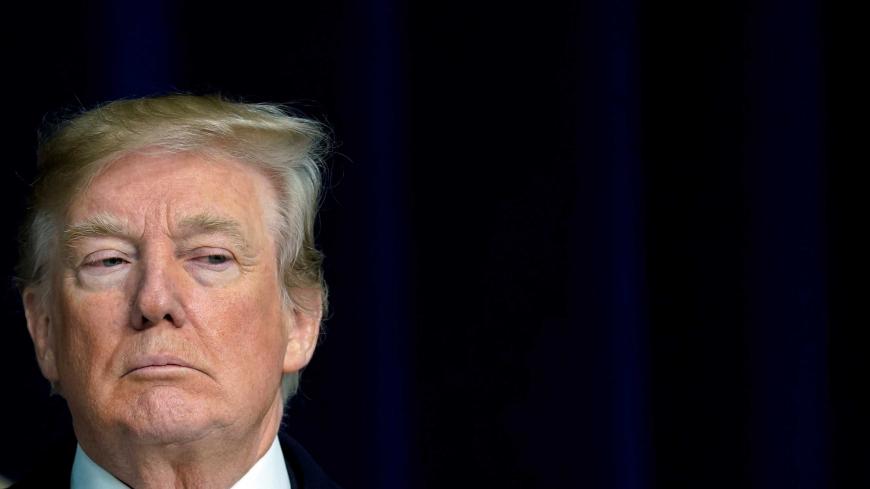 On Jan. 2, US Ambassador to Israel David Friedman met with new Zionist Camp leader Avi Gabbay. It was a friendly meeting to give the two men a chance to get to know each other. There were no major revelations and just a single comic pause, when Gabbay asked about the fate of the American peace plan. The ambassador's response was unequivocal: The United States has not abandoned the idea of reaching an arrangement. One might wonder when the Americans would realize that the peace plan idea has abandoned them.

Meanwhile, there isn’t a single member of Prime Minister Benjamin Netanyahu's Cabinet who has any expectations about US President Donald Trump's peace initiative. Instead, they share a rare consensus: It's all about nothing, and it will never amount to anything. The same sentiment prevails in Ramallah: Trump’s "ultimate deal" is dead and buried. Please avoid any condolence calls.

In Ramallah, a 10-minute drive from Jerusalem, Palestinian President Mahmoud Abbas is all holed up on top of a tall tree. People close to him say that he's done with the United States. Matters have reached a point that his office has issued unambiguous instructions to Palestinians in any official capacity whatsoever to cut off all ties with the US Consulate in East Jerusalem. Abbas doesn't want to hear from Trump. He has finally been convinced that the president is little more than a Zionist agent who is working with Netanyahu to decimate the Palestinian people and incite the entire Middle East against them. The much-discussed book "Fire and Fury" only infuriated the Palestinians even more: "We read in it that Trump sent [White House senior adviser Jared] Kushner to consult with [Jewish-American billionaire] Sheldon Adelson before putting together his peace plan," one senior Palestinian official said disparagingly on condition of anonymity. "And then he pretends to be an honest broker.”

The sense of euphoria among the Israeli right has reached record highs over the past few weeks. A tidal wave of new initiatives and legislation intended to bury the two-state solution is flooding the Knesset. There is the United Jerusalem law, which would require a special majority of 80 Knesset members to enact any changes to Jerusalem's municipal boundaries (in case of a diplomatic agreement), the decision by the Likud party's Central Committee to support the immediate annexation of the settlements in the West Bank, and a whole slew of similar initiatives and ideas. The purpose behind these initiatives and legislation is to establish facts on the ground by taking advantage of the Trump momentum. The prime minister is not blocking these initiatives as he did in the past. On the contrary, he is promoting them in what can only be called a free-for-all.

Meanwhile, some of the ideas that the American team looked into are starting to leak out, explaining why Abbas beat such a hasty exit from the scene. Although they have no formal confirmation, reports about them have started to appear on Al Jazeera's English-language website and various other places. These reports refer mainly to an old plan, already raised a decade ago. Now it seems as if most of the main players in the region, including the US team, are giving this plan another look. This would involve an exchange of territories by three or more parties (perhaps even four or five). What makes it different from prior efforts is that this time, the Egyptians and Saudis are in on it.

At the core of the idea is the creation of a major Sunni-Israel alliance, which would serve as a counterbalance to the victorious Shiite axis, which poses a threat in the north. The basic idea includes an extensive territorial exchange, in which Egypt would cede a piece of the Sinai Peninsula to the Gaza Strip. With this, Gaza's territory would extend southward along the seashore, making it three or four times larger than it currently is. This would make it possible to relieve some of the pressure in Gaza, but it would also shift the balance of power between the West Bank and the Gaza Strip.

According to this plan, the center of power in the future Palestinian state would be in Gaza, expanded toward the north of Sinai, rather than the West Bank. In exchange for the expanded territories that they would receive in the Gaza Strip, the Palestinians would give up territories in the West Bank, allowing Israel to annex the settlement blocs along with a generous amount of land around them, thereby maintaining some degree of territorial integrity between the various blocs. At the same time, Israel would give Egypt a narrow strip of territory along the lengthy southern border between the two countries. There is also the possibility that Saudi Arabia and Jordan would also participate in these territorial exchanges, with various ideas proposed.

As noted, a similar plan was already proposed in Israel in the first decade of the 21st century. It was developed by Israeli geography professor Yehoshua Ben Aryeh and adopted by head of the Israeli National Security Council Maj. Gen. Giora Eiland. Prime Minister Ariel Sharon sent a representative to Egyptian President Hosni Mubarak to see if the plan was even feasible. The Egyptians responded by tossing it into the dustbin of history. They refused to give up a single grain of sand from their territory in Sinai. The situation today is entirely different. Sinai constitutes a serious economic and security drain on Abdel Fattah al-Sisi's regime. He'd be happy to have someone relieve him of this problem, for the right price, of course. Sisi has already transferred two Egyptian islands to Saudi Arabia and survived.

Hints that this major plan is being formulated together with the Egyptians and Saudis could be discerned in a series of leaks over the past few weeks concerning both those countries' real position concerning Trump's Dec. 6 Jerusalem declaration. Despite all the official denials, Ramallah is convinced that Sisi and Saudi Crown Prince Mohammed bin Salman have betrayed them by giving a discreet nod to the Trump declaration.

In one of his tweets, Trump hinted that Israel would also be expected to pay a "political price" for his declaration (tweeting that “We have taken Jerusalem, the toughest part of the negotiation, off the table, but Israel, for that, would have had to pay more.”) Still, nothing came of it once the Palestinians blew up the talks. Diplomatic sources believe that Israel's anticipated concession revolved around a plan proposed by Likud Knesset member Anat Berko under which certain Palestinian neighborhoods in East Jerusalem would be transferred to the Palestinian Authority. That plan, which was described by Al-Monitor in an earlier article, is constantly being discussed and refined in secret discussions, with Netanyahu fully aware of it.

As of now, the whole idea has been put on ice, and not because of the cold wave hitting North America either. Abbas immediately recognized the risk and took advantage of the Trump declaration to escape as fast as he could. "That's what happens when people make plans that have no basis in reality," one senior Palestinian official told Al-Monitor on condition of anonymity. "Abbas would rather die with nothing than live with such a plan."