The Return of the Jordan Option for Palestine?

Adnan Abu Amer surveys some of the latest "outside the box" thinking on a territorial solution to the Israeli-Palestinian conflict. 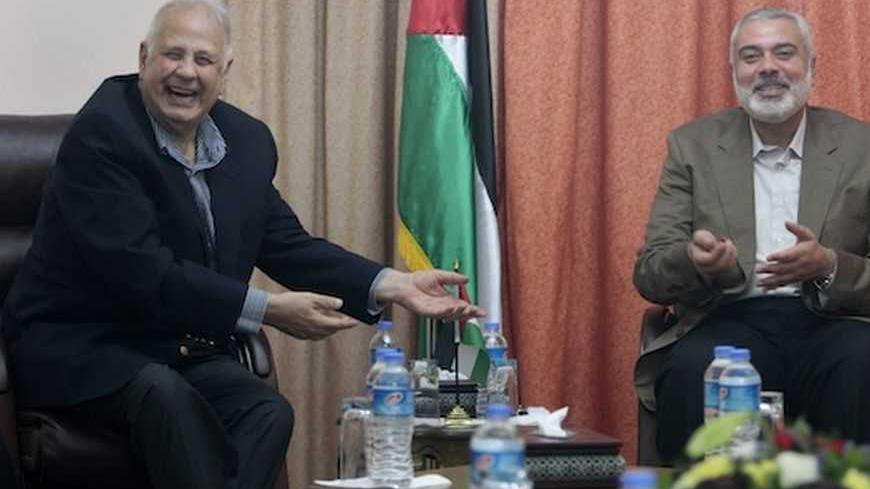 Since the Israeli-Palestinian peace process has reached a complete deadlock under the current government, and since there is no prospect of any serious breakthrough with the next government, both sides have begun to exchange ideas “outside the box” in order to find temporary solutions to the status quo in the West Bank and Gaza Strip.

Many of the region’s decision-makers consider these ideas to be relics of the past. Nevertheless, in light of the daily events and realities, decision-makers find themselves forced to take such ideas off the shelf and to try to turn them into actual political fact, as the Palestinian Authority (PA) falls apart and loses its vital roles and tasks.

There is growing talk about returning the Palestinian territories to their pre-1967 borders, when Egypt ran the Gaza Strip and Jordan oversaw West Bank affairs.

As the result of the war, Israel pushed both countries back to their borders. During the past 40 years, however, everything has been water under the bridge, placing all involved parties at a crossroads: either to re-shape the Palestinian map, or for Israel to impose its security border on its neighboring countries.

The political, security and military circles in Israel have been occupied for several days with studies, scientific seminars and ministerial recommendations, which suggest that Jordan should play a new administrative role in the West Bank. The late King Hussein had severed his ties with the West Bank under Palestinian pressure in 1986.

According to the Israeli reading of the situation, however, Jordan’s influence in the West Bank can be expanded. Some Israeli right-wing parties, which have emerged with considerable powers following the recent elections, have even suggested relinquishing the “two-state solution” and turning Jordan into a “nation-state” for the Palestinians, arguing that a Palestinian state to the west of the Jordan River poses a threat to Israel’s existence.

This proposal, however, was not born out of this moment; it was originally put forth by Ariel Sharon from the Likud Party and Yigal Allon from the Labor Party in the 1970s. While all parties “publically” opposed this proposal, they discussed it and weighed its advantages and disadvantages in meetings behind closed doors.

In a special meeting with his advisers and with Fatah leaders, Palestinian President Mahmoud Abbas said that they must be prepared for a confederation with Jordan, in the absence of an Israeli partner in the peace process. Meanwhile, former Jordanian Crown Prince Hassan met with a prominent Palestinian delegation from the West Bank. He told them that Jordan was forced to leave the Palestinian territories by the pressure of the 1967 war, which suggested that Jordan wishes to return again.

The Israeli leaks, however, were too significant to be kept hidden, and the secret visit of Prime Minister Benjamin Netanyahu to Amman a few days ago has been revealed. It has been said that Netanyahu met with King Abdullah II and discussed a confederation. Although he did not receive a decisive answer of approval or rejection, Tel Aviv considered this to be reassurance and encouragement to take further positions against the PA.

Furthermore, in light of the PA’s deteriorating political and administrative situation in the West Bank, Israel is further convinced that it is more achievable than ever to place the West Bank in the bosom of Jordan. Israel has gone as far as to propose new names for this entity, such as “the United Jordanian and Palestinian State,” or “the Federal Republic of Palestine and Jordan.”

Knesset member Aryeh Eldad, one of Israel's most prominent right-wing leaders, has collected the signatures of 6,000 Jews around the world in favor of a Jordanian-Palestinian state. Furthermore, 42 Knesset members out of 120 — and at least one from each of the ruling blocs — supported the idea, on the grounds that 75% of Jordanian citizens have Palestinian origins and are the elite in cultural, economic and political matters.

In the context of Jordan’s possible role in the West Bank, it is worth noting that throughout history, its relations with Israel have been like a "non-zero sum" game in international relations. Their interests converge at certain points and diverge at others. Moreover, both have close links to Western powers, which means that their roles have a similar function — especially regarding critical regional factors in the aftermath of the Arab revolutions.

In contrast, there is a general trend in Israel that supports "giving Gaza to Egypt," especially given its intervention in the last war, and Israel's desire to ask Egypt to assume more responsibilities related to Palestinian gas, water and electricity needs. Chief among its reasons is that Israel no longer has anything to look after in Gaza, more than seven years after its unilateral withdrawal from the strip, and it has no settlers to defend or guard.

A recent United Nations report confirmed that Gaza will not be fit for human living by 2020. Moreover, the ruling authority in Gaza, namely Hamas, is deemed illegal by Israel.

All of these reasons have intensified Israeli demands to expand the Gaza Strip from the south toward Sinai, El Arish and Sheikh Zuwaid — in application of Israel's final separation from Gaza — and establish an impenetrable fixed border. It would deal with the Gaza Strip in a fashion similar to Syria and Lebanon, while activating the Rafah crossing as much as possible so as to respond to Gazan needs.

The security factor leading Israel to push Gaza toward Egypt is the most encouraging, and this was expressed by the two generals Giora Eiland, former head of the National Security Council and strategic theorist of the plan to withdraw from Gaza, and Yaakov Amidro, Israel's national security adviser, in saying that Egypt does not like Israel. This is true, but it wants calm on its border, just as is the case with Syria — calm has prevailed in the Golan Heights for more than 40 years with no peace agreement between the two.

In addition, the presence of more than 1.5 million Palestinians in Gaza is a demographic problem plaguing Israel. This may mean that it is time to solve this problem by establishing an individual state led by Hamas in the Gaza strip, or by pushing it toward Egypt and making it part of Egypt. The world would then not deal with Israel as an occupying state, and if Palestinians continued to fire rockets from there, it would have the right to vigorously respond to them until it reaches what both sides consider a permanent truce.

Going back to history may seem useful when discussing a current issue. Such an Israeli plan was developed in 2004, when it pursued the "creeping annexation" policy of the Gaza Strip toward Egypt — either by completely annexing it or by allocating parts of the Egyptian territory to solve the Gaza Strip's economic, social and demographic problems.

What may allow Israel to succeed in promoting its Gaza-related plan is that it walks hand-in-hand with the issue of the "war on terrorism," amid allegations that al-Qaeda-affiliated armed groups are present in the Sinai and have easy access to Gaza. Hamas can get ammunition, explosives and training with free access from Gaza to Sinai, which increases the odds of armed attacks against Israel due to the length of the border between them.

In the framework of this plan, some security concerns, however, could restrict the freedom of Israel's strategic action against Gaza if Egypt assumed a direct role on the Gaza strip territory. Although it would be in Israel's interest to stop being responsible for the living conditions of Palestinians there, the fact remains that this would deprive it of the ability to control movement on the Gaza-Egypt border.

Adnan Abu Amer is dean of the faculty of arts, head of the press and information section, and a lecturer in the history of the Palestinian issue, national security, political science and Islamic civilization at Al Ummah University Open Education.