Is Israel forming an alliance with Egypt and Saudi Arabia?

Israel estimates that strengthening Egyptian President Abdel Fattah al-Sisi and maintaining a dialogue with Saudi Arabia are key elements for the region's stability. 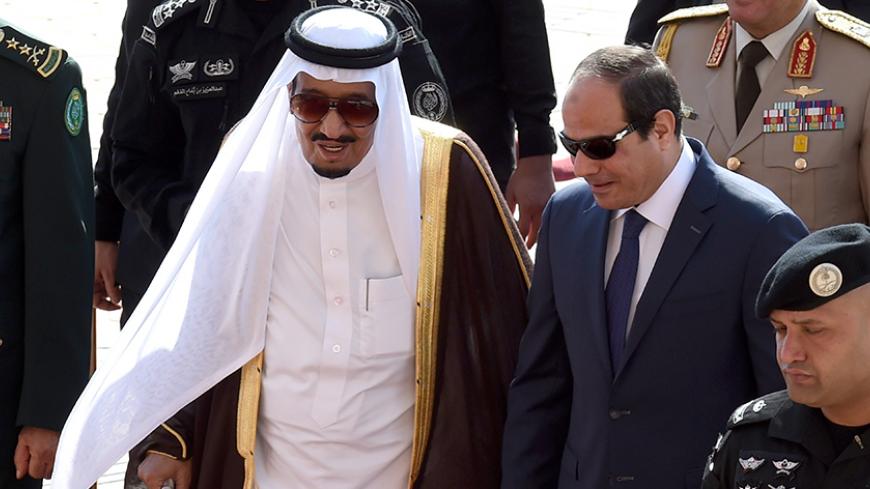 Egypt's April 9 announcement of the transfer of two islands, Tiran and Sanafir, to Saudi Arabian sovereignty came as a complete surprise to many in the Middle East. The only country that was not surprised was Israel. A top-level official in Jerusalem told Al-Monitor on April 12 that Israel had been privy to the secret negotiations. Israel had given its approval to the process and did not ask to reopen the peace agreement with Egypt, even though the agreement dictates that any territorial change or transfer of Egyptian sovereignty of lands that Israel gave back to other hands constitutes a violation of the treaty.

Talks between Saudi Arabia and Egypt on the transfer of these islands have been going on for years, with Israel firmly opposing the move. The fact that the transfer has now earned Israeli support reflects the depth of the shared interests between the three sides: Cairo, Riyadh and Jerusalem — although the Egyptians and Saudis prefer the label “Tel Aviv.”

This is a real geostrategic and diplomatic drama. Former Shin Bet chief Knesset member Avi Dichter of the Likud Party said on April 12 in an interview with the Israeli Kol Yisrael radio station that this step is one of the most important, dramatic diplomatic occurrences that have taken place between two Arab countries in the Middle East. Israeli Defense Minister Moshe (Bogie) Ya’alon, in a small pre-Passover celebratory toast with military reporters, updated and confirmed that Israel had, indeed, agreed to the course of action and had even received a written document, signed by all sides. The document confirmed Israel’s continued freedom of navigation in the Strait of Tiran, in which the two strategic islands are situated; the Strait of Tiran led to the important Israeli port city of Eilat. In addition, Ya’alon noted that the Americans had been partnered to the negotiations and are also signatories on the agreement. Thus, Ya’alon said, Israel had received all the requisite guarantees.

According to a senior security official, who spoke to Al-Monitor on condition of anonymity, Ya’alon emphasized to his associates that security cooperation between Israel and Egypt had reached an all-time high. The security systems of the two countries share the same interests. Egyptians, for instance, help Israel contain and cordon off Hamas in Gaza.

The recent move — the transfer of the two islands to Saudi Arabia — reveals part of the dialogue that has been developing between Israel and its Sunni neighbors. A highly placed Israeli security official, who spoke to Al-Monitor anonymously, added some details: Israel's relationships in the region are deep and important. The moderate Arab countries have not forgotten the Ottoman period, and are very worried about the growing strength and enlargement of the two non-Arab empires of the past: Iran and Turkey. On this background, many regional players realize that Israel is not the problem, but the solution. Israel's dialogue with the large, important Sunni countries remains mainly under the radar, but it deepens all the time and it bears fruit.

Egyptian President Abdel Fattah al-Sisi's action has aroused sharp public criticism in Egypt. The president’s opponents argue that under the Egyptian Constitution he has no authority to give up Egyptian territory, but Sisi rightly warded off this criticism: These islands originally belonged to Saudi Arabia, which transferred them to Egypt in 1950 as part of the effort to strangle Israel from the south, and prevent the Israel Defense Forces (IDF) from taking control of them. Israel embarked on two wars (the Sinai War in 1956 and the Six Day War in 1967) for navigation rights in the Red Sea. It took over these islands twice, but then returned them to Egypt both times. Now events have come full circle, and the Egyptians are returning the islands to their original owner, Saudi Arabia. This is a goodwill gesture from Sisi to King Salman bin Abdul-Aziz Al Saud, after the Saudis committed themselves to the economic solvency of the Egyptian regime for the next five years. The Saudis are making massive investments in Egypt and providing financial support to save the Egyptian economy from collapse.

There is another aspect to the Egyptian transfer of the islands to Saudi Arabia: In the past, several proposals were raised regarding regional land swaps, with the goal of resolving the Israeli-Palestinian conflict. The framework is, in principle, simple: Egypt would enlarge Gaza southward and allow the Gaza Strip’s Palestinians more open space and breathing room. In exchange for this territory, Egypt would receive from Israel a narrow strip the length of the borderline between the two countries, the Israeli Negev desert region from Egyptian Sinai. The Palestinians, in contrast, would transfer the West Bank settlement blocs to Israel. Jordan could also join such an initiative; it could contribute territories of its own and receive others in exchange. To date, this approach was categorically disqualified by the Egyptians in the Hosni Mubarak era. Now that it seems that territorial transfer has become a viable possibility under the new conditions of the Middle East, the idea of Israeli-Egyptian territorial swaps are also reopened; in the past, these land swap possibilities fired the imaginations of many in the region. In his day, former head of Israel's National Security Council Maj. Gen. Giora Eiland led a regional initiative on the subject. But he was stymied by Egypt.

Still, not everything is coming up roses. There are no simple equations in the Middle East, and this holds true in this case. In Israel there are those who are concerned about the growing Saudi Arabian influence in Egypt. This is reflected in the founding of Saudi-inspired Islamic madrassas (religious Islamic schools), and Saudi-type Sunni radicalization in Egypt. But these pessimists are the minority. “It is important for Sisi to strengthen and survive, he is the key to the stability of the entire region,” said a diplomatic source in Jerusalem who spoke to Al-Monitor on condition of anonymity.

In light of America distancing itself from the region and the cold shoulder that Egypt has received from Washington in recent years, Saudi assistance and Israeli support to Egypt are viewed as critical to Sisi’s continued grip on the regime. And to complicate the situation even more, we can add the reconciliation attempts between Israel and Turkey; these have continued for many long months in marathon negotiations between the sides.

A highly placed Israeli official told Al-Monitor on condition of anonymity that the Egyptians don’t want to see the Turks in the Gaza Strip, and are strongly opposed to a rapprochement between Jerusalem and Ankara. This is the reason, according to the source, that the reconciliation agreement has not yet been completed, and that there are gaps between the sides. In the current state of affairs, it is possible that the Turks and Israelis will accept the fact that they can’t come to a full agreement, and will settle for a partial rapprochement: an exchange of ambassadors, limited warming of relations and nothing more. Israel is sitting on the thorns of a dilemma: between its desire to normalize relations with Turkey, which could also facilitate the signing of an agreement to supply natural gas from Israel to Turkey, following discoveries in recent years of natural gas reserve off the Israeli coast; and its desire to promote the emerging Israeli-Sunni understandings that are becoming a strategic cornerstone in Israel’s national security.