While Iran has expressed its concerns that Turkey’s operations against Kurds in northern Syria will further inflame the war, it didn't outright condemn the offensive. 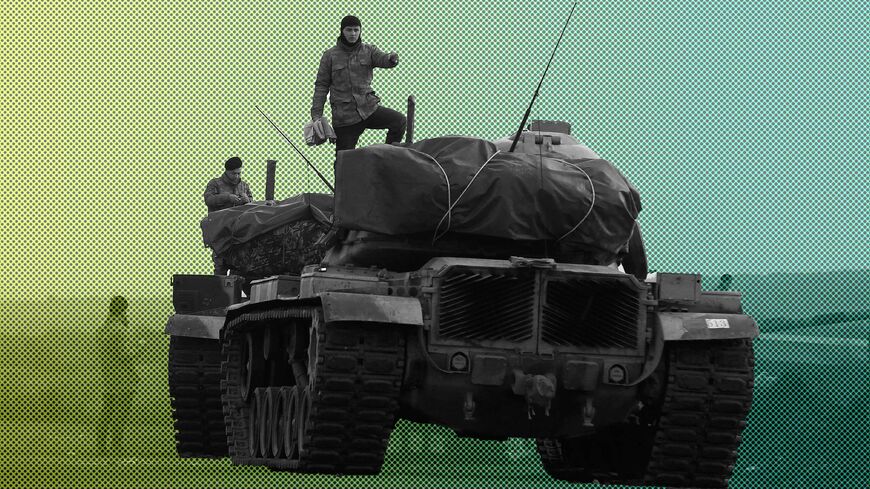 Turkish soldiers stand on top of tanks in a village on the Turkish-Syrian border in Gaziantep province, Turkey, Jan. 22, 2018. - REUTERS/Osman Orsal

Iran’s Foreign Ministry has expressed hope that Turkey’s airstrikes against the US-backed Syrian Kurdish forces in the northern Syrian city of Afrin will come to a speedy end. The statement falls short of an outright condemnation and shows the complex nature of Syria’s civil war.

Bahram Ghassemi, Iran’s Foreign Ministry spokesman, said Jan. 21, “The Islamic Republic of Iran is monitoring closely and with concern the recent events in the city of Afrin, Syria, and is hoping these operations quickly come to an end and stop the deepening or spreading of the crisis on the border between Syria and Turkey. The continuation of the crisis in Afrin can strengthen terrorist-takfiri groups in northern Syria and inflame the fires of war once again in this country.”

Ghassemi continued, “The Islamic Republic of Iran emphasizes the protection of the territorial integrity of Syria and respecting the national government of this country and preventing the intensification of a humanitarian crisis.” He added that Iran expects Turkey to remain committed to the Astana peace talks that aim to resolve differences in Syria.

Turkey’s latest assault is aimed at the People’s Protection Units, or YPG, a mostly Syrian Kurdish militia that was instrumental in the fight against the Islamic State. However, Turkey accuses the YPG of having links with the Kurdistan Workers Party, which has waged an insurgency against the Turkish government on and off for nearly four decades.

According to Iranian media, Mohammad Bagheri, the chief of staff of Iran’s armed forces, spoke to his Turkish counterpart, Hulusi Akar, about the Jan. 21 operations. Akar said the Turkish attack was a response to “gatherings of terrorist groups in this region" and sought "to confront threats of this group against villages on the border." Akar said Turkey’s operations took place within a “legal defensive framework.” Akar said Turkey respects Syria’s territorial integrity and would remain committed to the negotiations between Iran and Russia regarding Syria.

Bagheri said, “Syria’s territorial integrity, independence and government must not be damaged, and Turkey must clarify that it does not have expectations on Syrian land.”

He added, “These types of actions must not be taken advantage of by the enemies of Syria; in particular, America and its allies [should] not take advantage of this situation.”

Iran has had its own problems with Kurdish militant groups that have sought refuge in Iran's Kurdistan Region. This was a topic of conversation during a Jan. 21 visit to Iran by the prime minister of the Kurdistan Regional Government, Nechirvan Barzani. Barzani, who appeared to have traveled to Iran to discuss economic cooperation on the Iran-Iraq border, said those borders must be borders of friendship and development. He added that the Kurdistan Region of Iraq will not permit any group to use the Kurdistan Region against the Islamic Republic.

During a meeting with Barzani, Ali Shamkhani, the secretary of Iran’s Supreme National Security Council, addressed attacks made by Kurdish forces against Iranian border guards. “That some anti-revolutionary groups use Kurdish territory, assassinate our soldiers and our citizens, return to land under the control of the Kurdistan Regional Government and take responsibility for it with Kurdish media is not acceptable,” he said.