A complex series of considerations — including the ignition of blowback from Kurdish groups elsewhere in the region — has caused Iran to remain muted in its response to Turkey’s military incursion into northern Syria. 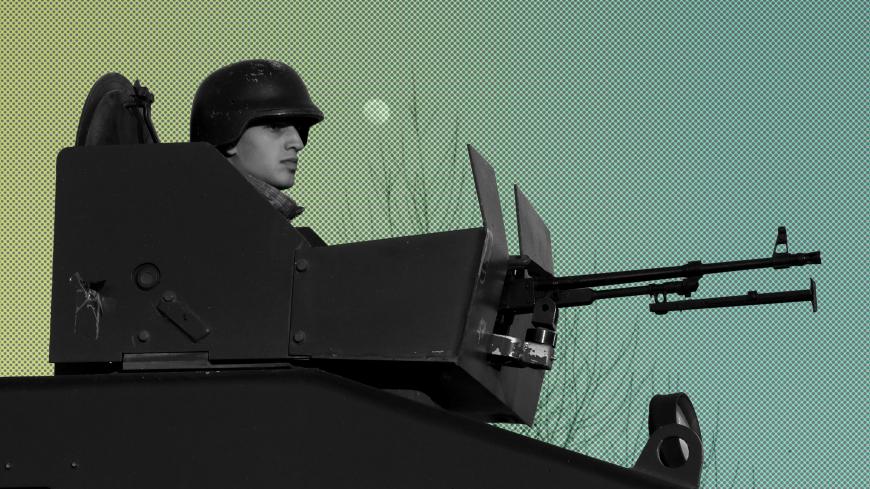 A Turkish soldier is seen in an armored personnel carrier at a checkpoint near the Turkish-Syrian border in Kilis province, Turkey, Jan. 29, 2018. - REUTERS/Murad Sezer

The Turkish military operation in Afrin against Kurdish fighters has sparked different reactions among various parties involved in Syria, based on how each actor interprets the goals and implications of Ankara’s unilateral move. While the United States has appeared to be against the operation, especially given Washington’s support for the Kurdish forces fighting under the banner of the Syrian Democratic Forces (SDF), Russia has silently gone along with the move. Iran, as another influential actor on the Syrian stage, has preferred to take a line between total rejection and total acknowledgement of the operation.

Tehran’s first reaction came from Foreign Ministry spokesman Bahram Ghassemi, who on Jan. 21 expressed “hope” that the operation in Afrin would end immediately to prevent further instability in Syria. While stating that the Islamic Republic “is monitoring closely and with concern the recent events,” Ghassemi underlined the necessity of preserving “territorial integrity of Syria and respecting the national government of this country.” The following day, chief of staff of Iran’s armed forces, Maj Gen. Mohammad Hossein Bagheri, held a phone conversation with his Turkish counterpart Hulusi Akar, in which the Iranian side once again stressed the importance of maintaining Syria’s territorial integrity, while stopping short of calling upon Turkey to end its operation.

Based on these remarks, one can reasonably say that Iran has adopted a rather modest stance regarding the Turkish move, avoiding directly condemning the operation, while not supporting it at the same time.

Iran has adopted a rather modest stance regarding the Turkish move, avoiding directly condemning the operation, while not supporting it at the same time.

In analyzing the reasons behind Tehran’s stance, it should first be noted that in the eyes of the Islamic Republic, one of the main challenges it is facing in post-Islamic State (IS) Syria is Washington’s desire to maintain and expand its influence in the country, especially using proxy groups such as the SDF. While the previous attempts by the United States to form and support an effective armed opposition had failed, the SDF introduced itself as a more successful experience, with the liberation of Raqqa from IS as its main achievement. As Kurdish fighters form an important part of the SDF, Ankara’s operation naturally means a blow to the SDF’s expanding influence, and thereby that of the United States.

In the same vein, by clearly condemning Washington’s support for Syrian Kurdish groups and warning the United States over its military plans in northern Syria, Ankara is actually distancing itself further from its longtime NATO ally. It is no secret that the widening gap between Ankara and Washington — which started in the aftermath of the failed July 2016 coup in Turkey — is welcomed by Tehran as a favorable development. For Iran, this trend means that the United States is facing more hurdles in its policy of containing it in the region.

Iran’s general concerns over Kurdish centrifugal sentiments in the region must also be taken into account when considering the situation. If Syrian Kurds manage to maintain their rule in northern Syria, the next step would be for them to demand a meaningful degree of autonomy — if not full independence — from the central government in Damascus. In line with the still fresh desire for independence among Iraqi Kurds, this could potentially reignite the Kurdish issue in the region, posing a great challenge not only for Damascus, but also for Tehran, Ankara and Baghdad.

Last but not least, Iran seems to be satisfied — at least for the time being — with the "Idlib for Afrin" deal between Turkey and Russia. In other words, together with Moscow, Tehran had apparently reached the conclusion that allowing Ankara to achieve what it wants in Afrin would free the Syrian government’s hand to retake the areas under the control of Turkey-backed rebel groups in Idlib province. From this viewpoint, as a state actor with a legitimate set of national security goals, Turkey will be easier to deal with in the future when it comes to reintegrating northern Syria into the framework of a unified Syrian territory, compared to the Kurdish or other armed groups as nonstate actors with still vague agendas.

Yet these considerations have not led Iran to take a supportive stance regarding the Turkish operation. First, unlike Turkey, Iran is cautious not to entirely alienate different Kurdish parties in the region. On Jan. 21, when Ankara had just launched Operation Olive Branch, Iran was hosting the prime minister of the Iraqi Kurdistan Regional Government, Nechirvan Barzani. During his stay in Tehran, Barzani stressed that the KRG’s territory will not be used against the Islamic Republic, while expressing his support for a unified Iraq. Barzani’s remarks, as well as the timing of the trip, could be interpreted as a signal by Iran that it is ready to deal with the Kurds as long as they observe Iran’s core interests in the region.

In this vein, Iran is worried that if Turkey decides to go beyond its declared goals and seeks to purge the whole of northern Syria of Kurdish groups, the move could mobilize and radicalize the Kurds not only in Syria, but around the region, thereby further destabilizing the regional situation. On the other hand, by complicating the political process — as has already happened given the Kurdish groups’ refusal to take part in the Syrian National Congress in Sochi — radical and terrorist groups could once again gain momentum and push Syria deeper into chaos. Ghassemi in fact mentioned this last point when he warned that “the crisis in Afrin may lead to restrengthening of takfiri-terrorist groups” in Syria.

Finally, Ankara’s expressed plan to expand the scope of its operation further to the east to Manbij, as well as the latest encounters between the Turkish and Syrian armies in Aleppo, could for Iran mean that Turkey might be looking for something bigger than just defeating the Kurds. This could involve attempting to create a permanent zone of influence for itself across northern Syria. This is not something Iran is ready to accept.

As such, the intertwined sets of positive and negative factors at play have all caused Iran to adopt a cautious approach toward Turkey’s military move — though the position could change at any moment depending on Ankara’s future choices in Syria.