Local associations in Gaza are promoting urban and peri-urban agriculture to help marginalized families in light of the water crisis and food insecurity. 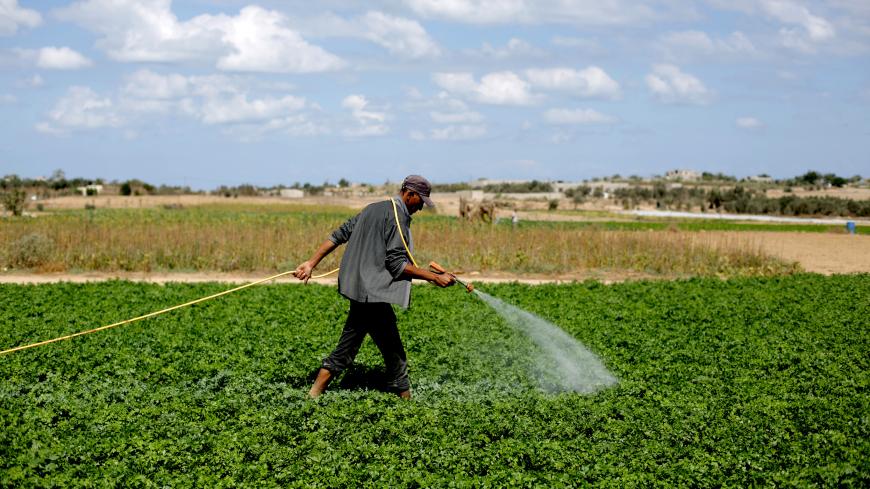 RAFAH, Gaza Strip — On the roof of the Zahrat al-Madaen School for Girls, the Union of Agricultural Work Committees (UAWC) runs a project to collect rainwater and channel it into underground barrels. The water is then pumped to irrigate gardens that the union is developing at the school. The project is part of an initiative to raise awareness among youth about using rainwater and public spaces for agricultural production.

UAWC launched the initiative in December at four schools in Rafah run by the UN Relief and Works Agency. Rafah, along with the rest of Gaza, faces shortages in potable and irrigation water. According to the union, collecting rainwater on rooftops is a fitting idea and a key element in helping alleviate the water crisis. The major components needed are collecting elements, storage units (underground barrels) and pumps to move water from storage units to gardens through pipelines designated for different usages.

Ghassan Abu Saada, the engineer supervising the union's projects, told Al-Monitor, “International organizations and donors’ policies are tending toward supporting peri-urban and urban agricultural projects in the Gaza Strip to make use of urban spaces to produce pesticide-free crops and help poor families achieve self-sufficiency by producing crops that are safe for household consumption.”

Urban agriculture aims to produce crops and raise animals in small spaces — like empty stretches of land, backyards and balconies — in cities. Peri-urban agriculture includes semi-commercial and commercial farms close to towns. Both urban and peri-urban agriculture can contribute significantly to family food security, especially in times of food shortages and other crises. The Food and Agriculture Organization advocates both being integrated into development and food strategies and urban planning.

In addition to setting up water collection and gardens in schools, the UAWC is also helping individuals create vegetable gardens at their homes. Abu Saada noted, “We are currently working on developing gardens for houses along 50 meters in al-Mawasi village, in Khan Yunis, with funding from Action Against Hunger, and along 200 meters in other areas in Beit Lahia, in the northern Gaza Strip, with funding from the Norwegian People’s Aid. We want to prepare these areas to allow citizens to plant them with various types of vegetables and reduce spending on food by marginalized families.”

The project instructs people tending the gardens on how to maintain their crops without using pesticides and artificial fertilizers in addition to how to make their projects sustainable and safe for their families. Abu Saada said the initiative targets poor families generally, but especially households headed by female breadwinners.

Within the framework of raising awareness among young people, the union is using funding from the Italian Overseas Association, which promotes development, to train students in urban and peri-urban agriculture by starting clubs at schools to focus on the environment.

Meanwhile, through training and other activities, the Gaza Urban and Peri-Urban Agriculture Platform (GUPAP) is advancing the inclusion of urban and peri-urban agricultural in official, local strategies and policies and the adoption of programs and projects to support urban agriculture. The platform, which is independent, obtains funding for specific projects through grant proposals submitted to local and international organizations.

Ahmed al-Sourani, a platform founder, told Al-Monitor, “GUPAP was launched in 2013 by individuals working in agricultural associations in the Gaza Strip to promote [peri and urban agriculture] in governmental and nongovernmental organizations and to support a more resilient and sustainable agricultural sector in cities.”

Sourani said, “GUPAP was sponsored for one year [from June 2016 to June 2017] by the Palestinian Nongovernmental Organizations Network, while it [waited to] receive its official work permit in October 2017. GUPAP currently includes more than 100 local and international associations working in the field of local development in the Gaza Strip. During the hosting period, the platform was working on obtaining the license and at the same time was working to influence and review governmental and nongovernmental agricultural and economic policies to serve the development of the peri-urban and urban agricultural sector.”

According to Sourani, as of 2017 at least 11 international and local organizations and entities, including the ministries of Agriculture and National Economy, had adopted the urban and peri-urban agricultural approach as part of their strategies thanks to GUPAP’s advocacy work and a series of trainings and workshops it conducted.

Mohamad Bakry, UAWC director general in Gaza, told Al-Monitor, “With the limited agricultural spaces available due to urban expansion, the lack of rural areas and the worsening water crisis, the union had encouraged urban and peri-urban agriculture in its projects in the Gaza Strip from 2015 until it became part of its annual strategic plan in 2017.”

Abu Shamala clarified, “Urban and peri-urban agriculture goes beyond the notion of roof agriculture and gardens. It is a broader notion that should include comprehensive planning, reliance on alternative resources, like treated water for irrigation to overcome the water crisis, implementation of rainwater harvesting projects and introduction of new agricultural techniques.”

Various international and local organizations in Gaza are seeking to clone successful regional and international experiments to promote sustainability in the agricultural sector and food security, which is currently at risk in Gaza. To do so, the use of available urban resources is encouraged to allow individuals to obtain fresh and secure food and to contribute to creating job opportunities.