Controversy ensues in Egypt over Sisi's use of religious endowments

President Abdel Fattah al-Sisi is discussing the option of investing religious endowment assets in national development projects to promote the economy, although some point to issues of this action's legality. 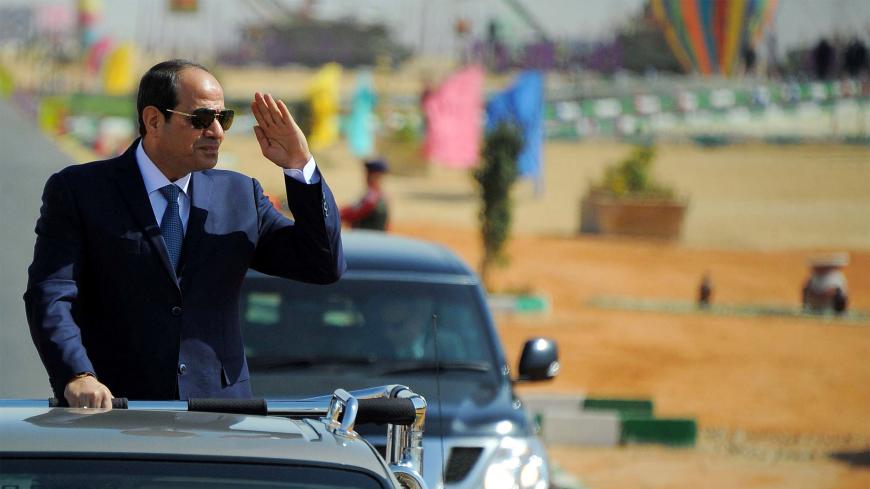 Egyptian President Abdel Fattah al-Sisi greets soldiers during a presentation on combat efficiency and equipment of the armed forces, Suez, Oct. 29, 2017. - The Egyptian Presidency/Handout via REUTERS

On Dec. 26, President Abdel Fattah al-Sisi met with Minister of Religious Endowments Mohamed Mokhtar Jumaa and the head of the Endowments Authority, Ahmed Abdel-Hafiz, to discuss the use of endowment assets to support national projects to help promote growth of the Egyptian economy. Both Jumaa and Abdel-Hafiz expressed agreement with Sisi's overall approach, which he had set in motion in 2016.

The total value of Egypt’s endowment assets and properties is not known. Some press estimates, however, put the value of Islamic endowment assets at about $10 billion, while Abdel-Hafiz estimates the Endowment Authority's total assets, including property and investments, to be about $40 billion.

Religious endowments, or waqfs, consist of income-producing property whose usufruct is assigned by its original owner to a mosque or some other Islamic institution. The endowments are used to carry out charitable works, such as building schools, orphanages, hospitals and mosques, and distributing clothes and food to the poor and needy, among other activities.

The original owner of an endowed property retains his or her ownership in it, but the usufruct right is conveyed to an endowment authority. In Egypt, the Endowments Authority, affiliated with the Ministry of Religious Endowments, was established by presidential decree in 1971. It is the sole competent authority empowered to manage and invest in endowment assets. The authority exercises its usufruct rights by investing in an endowment and dedicates any revenues generated to furthering endowments. Such investments can be in real estate, agriculture, industry or financial institutions.

The Ministry of Religious Endowments is concerned with all matters related to Islamic preaching in Egypt. It ensures mosques' upkeep and the appointment of preachers and manages Islamic centers.

In July 2016, Sisi issued a presidential decree to form a committee tasked with drawing up an inventory of endowment assets to begin considering how to best benefit from them. The committee was also given authority to implement legal and administrative measures toward the overarching goal. The committee — headed by the Ibrahim Mahlab, assistant director for national and strategic projects — continues to meet periodically.

In June 2017, Mahlab's committee announced the removal of various restrictions on endowment lands, such as allowing some to be taken back, and that it was considering allowing the Endowment Authority to enter into partnerships with other institutions on major projects. That is, capital generated by endowment properties could be used to invest in projects in the education sector, business chains, industrial zones and other areas that would serve the community while increasing the endowment's assets.

Sheikh Shawki Abdel Latif, undersecretary of the Ministry of Religious Endowments, praised the regime for seeking to benefit from the endowment funds to support the national economy. He told Al-Monitor, “A feasibility study for any national project that may be financed by the endowment [assets] must be conducted by specialists to avoid any investment risks and to protect the endowment assets from losses.” Abdul Latif also stressed the importance of the committee headed by Mahlab. “Numerous restrictions are registered on endowment lands. Also, there are decades-old cases of corruption that must be dealt with firmly.”

The forms the corruption takes vary. For instance, some officials facilitate the seizure of land and other authority assets, while others intentionally refrain from setting controls to determine the rental value of properties. Another scheme involves renting endowment properties at a rate below the market value in return for a tenant kickback. In 2017, close to 2,000 corruption cases were reported at the authority.

Abdul Hamid al-Atrash, former head of Al-Azhar's Fatwa Committee, takes a different position. “I reject the idea of using endowment funds to finance national projects," he told Al-Monitor. "These investments could incur losses, and this could affect the invested endowment funds. Also, it is not permissible to dispose of all or part of the endowments before reverting to their original owner, who remains the sole authority competent to determine how the endowed property may be used even if the usufruct right was assigned.”

“Changing how endowment funds are invested or exploited could be difficult in some cases,” Atrash said. “Some endowment owners have died, so it is not possible to invest the property they gave in mortmain to finance national projects. Endowment funds can only be used to lay pavement, hospitals, schools and other national projects if their owner has allowed it.”

Atrash further explained, “It is forbidden under Sharia for anyone to use religious endowments to finance national projects, without the consent of the owner of the endowment, especially since these funds are not public funds or state properties. Even the Ministry of Endowments does not own these funds, but is only managing them as a usufructuary.”

Rashad Abdu, an economic expert and head of the Egyptian Forum for Political and Economic Studies, told Al-Monitor, “The state’s inclination to invest endowment assets is a very positive step in light of the mismanagement of endowments and the spread of corruption.”