US elite troop training in Iraq lags after Mosul

The United States and its allies aren’t training elite counterterrorism forces fast enough to replace the losses incurred in the brutal fight against the Islamic State. 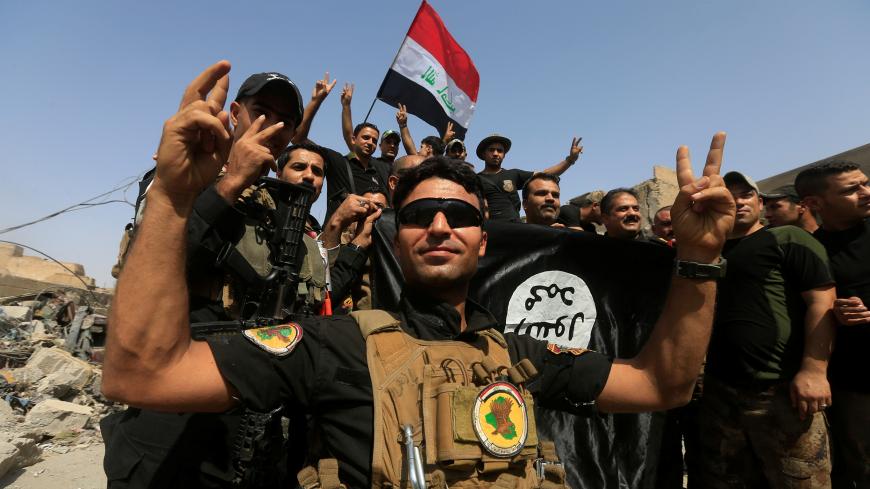 The United States and its allies failed to train any new members of Iraq’s elite counterterrorism force in the aftermath of the battle for Mosul, a potential blow to efforts to rebuild the country’s premier fighting unit after the fall of the Islamic State (IS).

Between July and October, according to the Pentagon’s Inspector General (IG), the 73-nation coalition combating IS in Iraq and Syria did not train a single new recruit for the Iraqi Counter-Terrorism Service (CTS), which spearheaded nearly nine months of block-by-block combat to reclaim Iraq’s second-largest city from IS. The admission raises concerns about the Pentagon’s ability to meet its goal of having 20,000 fighters in the elite unit within the next three years, especially after they suffered a 40% casualty rate in the battle for Mosul.

“I think it’s questionable whether that’s a realistic goal,” retired Lt. Gen. James Dubik, who led the training of Iraqi forces for NATO during the surge of 2007-2008, told Al-Monitor. “The country probably has some thinking to do, because the CTS forces were originally envisioned to be just that — more of a special forces capacity. They were able to be very selective in the kind of training and material and intelligence force they provided.”

Instead, Iraqi Prime Minister Haider al-Abadi and his predecessor Nouri al-Maliki have both used one of their prime assets as a “regular infantry force” to battle IS in costly urban fights such as Fallujah and Mosul, said Dubik, now a fellow at the Institute for the Study of War. The devastation of those campaigns has left experts unclear how the force, originally designed for training, intelligence and elite missions, will be used in the future.

As of Dec. 5, the US-led effort had trained more than 100,000 Iraqi Security Forces since the beginning of the anti-IS mission in October 2014, according to coalition figures provided to Al-Monitor. That figure includes 14,800 anti-terrorism troops, an umbrella designation that includes the CTS unit as well as other elite units such as the Emergency Response Division (ERD). Last month’s IG report said that 5,000 core CTS forces have been trained since 2015.

Training efforts in Iraq after the Mosul fight focused on building forces to hold areas taken from IS and “replenishing the ranks of forces that have suffered heavy casualties,” the Pentagon IG report noted. “However, while Counter Terrorism Service (CTS) recruits also suffered heavy losses during battles against [IS], no new recruits received training from the Coalition this quarter.”

The IG’s findings, however, did not indicate that CTS military instruction entirely shut down in the months after Mosul. Some 341 troops already in the CTS ranks were going through specialty or advanced courses at the time, and a coalition spokesman noted that the reason no CTS recruits graduated training in the third quarter of 2017 is because the next course did not begin until October. Some 933 CTS troops who enrolled in that course graduated from the basic training program in November.

Overusing special operations forces is not an uncommon problem, Dubik said, pointing to the US practice in World War II. The US Army once even considered making Ranger training mandatory for all recruits in the 1960s, before the Pentagon deemed the idea too costly.

If efforts to train, equip and recruit fresh forces in Iraq are delayed, the holdup could hamstring the US-led effort to leave the country’s security to indigenous forces, a major focus of the US-led mission to defeat IS. The Pentagon plans to spend nearly $1.3 billion to train and equip Iraqi troops and police units over the next year, providing them with thousands of M16 and AK-47 assault rifles, as well as hundreds of Humvees and armored vehicles.

At least 5,200 US troops are stationed in Iraq to help assist the mission, according to the Pentagon’s latest account released Wednesday, although figures released by Defense Manpower Data Center in November, which tracks counts of Pentagon military and civilian personnel deployed overseas each quarter, showed more than 9,000 American personnel in the country.

The difficulty of training elite units presents a challenge to the Donald Trump administration’s global strategy to fight terrorism, an outgrowth on Barack Obama-era military policy that relies on building local forces in 19 countries where US troops are deployed, including Iraq and Syria.

“We have got to have an integrated strategy on this, and it has got to be one that goes after the recruiting and [IS] fundraising, as well as delivering a military blow against them in the Middle East,” Defense Secretary James Mattis said of the anti-IS strategy at his Senate confirmation hearing in January. “And that way you slow down this growth and start rolling it back [IS] by, with, and through allies.”

Watchdog reports have called into question the effectiveness of US efforts. A Pentagon IG report released in April found that CTS trainees went through US-led courses that lacked adequate training standards and did not conduct live-fire exercises on all weapons they carried into combat, including anti-tank guns and lightweight artillery. Just 2,000 CTS troops graduate from a US training academy every year, and training a single soldier can take up to a year.

Though the Pentagon has made CTS a key force in its effort to eliminate terrorist and insurgent safe havens, Iraq’s recent political instability has also impacted that mission. The Washington Post reported this week that CTS units are now leading efforts to secure Kurdish-controlled parts of Iraq that Baghdad occupied after the Kurds’ independence referendum in September.

The IG’s report also offers troubling news for efforts to stabilize Iraq after the defeat of IS. In the third quarter of 2017, the coalition also failed to train a single member of the ERD, a rapidly deployable unit housed under the Interior Ministry, while the Iraqi police trained just 24 new recruits. Members of the ERD, subject to congressionally mandated vetting procedures, have been accused of torture and extrajudicial killings in the past.

Experts worry that the coalition training effort lacks support from Iraq’s ministries of Defense and Interior that provide civilian oversight to grow and sustain the CTS. A provision in the annual US defense authorization bill, however, would allow a US office based at the embassy in Baghdad more leeway to support those institutions.

“It needs to be a national effort,” said Bill Smullen, the director of national security studies at Syracuse University, once the chief of staff to Secretary of State Colin Powell. He told Al-Monitor, “There are a lot of people in civilian clothes who have ill feelings toward Iraqi military and government. It is nationwide. That’s the way they need to think of it — a national effort in all places, all ways and all times.”

Though US troops are stationed in Iraq with the permission of the Abadi government, there’s no long-term agreement with Baghdad for that presence to stay in place. That has raised US concerns that the void could be filled by the Iranian-backed Popular Mobilization Units, which could end up providing “a lot of assistance on the security side that’s less helpful to Iraq and more helpful to Iran,” according to Dubik, unless the Trump administration develops a robust strategy to boost Iraq’s government institutions, not just the military.

“Our focus has been on sharpening the tip of Iraq’s spear,” Dubik said. “Now we’re in a place where we have to have a balance.”