Pentagon blows deadline to pry Iraq off US military aid

The Donald Trump administration will continue to foot the bill for rebuilding Iraq’s defense institutions amid rising Iranian influence. 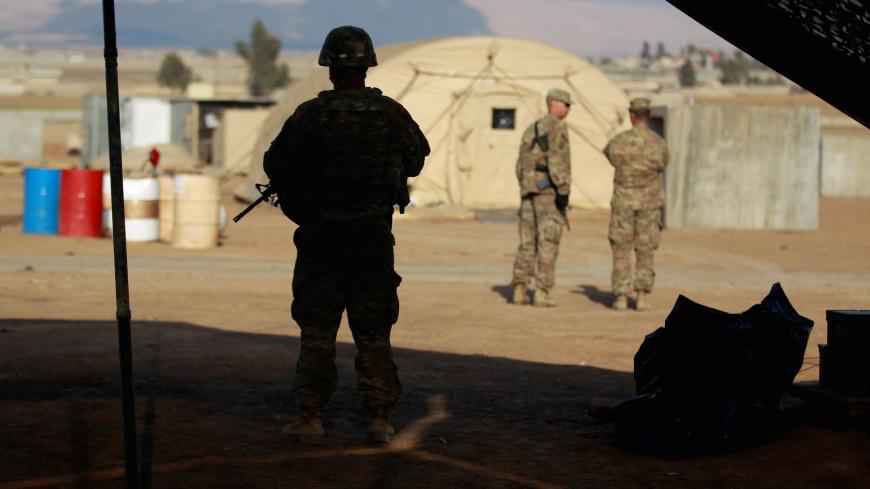 A US soldier from the 2nd Brigade, 82nd Airborne Division, stands guard at a military base north of Mosul, Iraq, Feb. 14, 2017. - REUTERS/Khalid al Mousily

The Donald Trump administration has missed a congressional target to put Baghdad in charge of paying for US security cooperation amid persistent insecurity and rising Iranian influence.

The administration had planned to have Iraq start paying for the US-funded Office of Security Cooperation-Iraq in October 2017. According to a Pentagon report sent to Congress in March and reviewed by Al-Monitor, however, drawn-out combat operations against the Islamic State (IS) have left Baghdad with “little bandwidth” to help pay for the office out of the Iraqi treasury and US assistance programs.

The office was set up in the US Embassy in Baghdad in 2011, when oversight of US security assistance to Iraq was transferred from the Pentagon to the State Department following the Barack Obama administration’s decision to pull US troops out of the country. It is charged with supporting the Iraqi Ministry of Defense and counterterrorism services along with keeping track of US weapons deliveries. The office has a $42 million budget this fiscal year, down from $70 million in fiscal 2017. Since the office isn’t currently involved in efforts to train and equip Iraq’s military, it can’t legally draw from the $1.3 billion fund that the Defense Department uses for counter-IS operations.

The State and Defense departments are working with Baghdad “to ensure sufficient resources to address ongoing operational and other high-priority requirements,” the report states. “As such, there are insufficient [US funds] and Iraqi national funds available” for training efforts.

A State Department official told Al-Monitor that transitioning the office was presently “impractical” due to the high tempo of counter-IS operations and the Iraqi military’s “huge needs” for equipment and sustainment support. The office is helping coordinate efforts to get Iraq’s elite Counterterrorism Service back into shape; it played a key role in the battle for Mosul last summer and suffered 40% losses. Congress also recently added a provision to give the office the authority to help support Iraqi agencies responsible for homeland security, including police and other civilian security organizations; Al-Monitor first reported about the moves to add this provision in July 2017.

The delay comes as the Trump administration is sending mixed messages about its long-term military goals in Iraq. The Pentagon shuttered its anti-IS combat headquarters in Iraq on Monday, while simultaneously considering stronger pushback against Iranian militias in the country in the wake of IS' defeat.

Some experts say the delay in Iraq's assumption of the costs of the Office of Security Cooperation shows the difficulties involved in Iraq's strategic, long-term military planning.

“The return on investment is more noticeable at the tip of the spear, the investment is less noticeable the further down the hilt of the spear you go,” James Dubik, a retired Army lieutenant general who headed the US-led training effort in Iraq during the 2007 surge, told Al-Monitor. “Kicking [IS] out of Mosul was the right effort. But simultaneously should have been the effort to improve the systems and processes at the senior military level.”

The United States has approved some $22 billion worth of military sales to Iraq since 2003, according to the State Department. Yet as Baghdad looks toward parliamentary elections in June, high-ranking officials concede that the US military mission faces a rising threat of Iranian interference.

“We have worrisome evidence that Iran is trying to influence — using money — the Iraqi elections,” US Defense Secretary James Mattis told reporters during a trip to the Middle East in March.

In particular, the Iran-linked Popular Mobilization Units, which began to be integrated with the Iraqi Security Forces in December, have also become an increasingly powerful force in the country. They notably used stolen US tanks to help beleaguered Iraqi army troops battle IS last year.

In February, the State Department told the Pentagon’s inspector general that the Shiite militias had snatched as many as nine M1 Abrams tanks from IS in Mosul and Tikrit. Though the Pentagon says the tanks have since been returned to the Iraqi army, experts say nabbing them has proven the militias’ battlefield capabilities.

“These guys made their names being insurgent groups,” Phillip Smyth, a fellow at the Washington Institute for Near East Policy, told Al-Monitor. “Now they’re capable of launching mechanized operations. That’s quite a leap.”