The US decision to withdraw troops from Iraq could help the Iraqi prime minister’s re-election campaign. 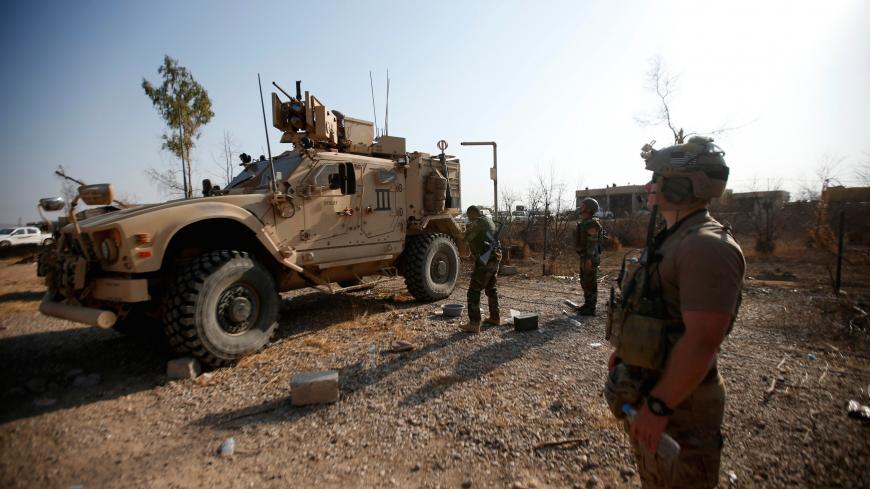 US military vehicles are seen in Bashiqa, east of Mosul, during an operation to attack Islamic State militants in Mosul, Iraq, Nov. 7, 2016. - REUTERS/Azad Lashkari

The US-led coalition fighting the Islamic State (IS) in Iraq all but confirmed today that US military advisers are beginning to leave the war-torn country. The coalition's announcement, following an early morning Associated Press report, characterized the shift as a change in mission toward “policing, border control and military capacity building” as “invited guests in Iraq” following battlefield victory against IS.

“This is to give Abadi the visible reduction he needs to show before elections,” Michael Knights, a fellow at the Washington Institute for Near East Policy, told Al-Monitor. “The US knows it has the same influence with 4,000 or 8,000 troops.”

The United States had already announced that 5,200 troops in Iraq would shift to a “conditions-based” presence in the country after Abadi declared IS defeated on Dec. 9. Last month, the head of special operations for the anti-IS coalition, US Brig. Gen. James Glynn, said US special forces spent up to 80% of their time advising and “hardly ever” accompanied Iraqi troops on missions. That figure, which excludes short-term deployments that included special operations troops, is believed to be far short of the real total, however.

“The Coalition will tailor our forces in consultation with our Iraqi partners in order to ensure the lasting defeat of [IS]," US Brig. Gen. Jonathan Braga, head of operations for the American-led coalition fighting in Iraq and Syria, said in today’s statement.

The move could help to insulate Abadi as US troops get further away from the frontlines. Since the United States first brought troops back to Iraq to fight IS in 2014, the Pentagon has helped liberate 98% of IS-held territory and assisted in training more than 127,500 Iraqi troops.

With Abadi facing an electoral threat from Iranian-backed militias that split from his coalition last month as well as resurgent Shiite rivals such as former Prime Minister Nouri al-Maliki and former Transportation Minister Hadi al-Ameri, the prime minister “wants to pre-empt any electioneering on the issue of US presence, and is heading it off with pre-emptive reductions,” Knights said.

US Secretary of State Rex Tillerson called on the Iraqi government to send the Shiite militias back home last year, causing a firestorm of controversy. Since then the United States has kept a lower profile, even as Washington hopes to maintain a residual US troop presence over the long term in part to counter Iranian influence in the country.

Meanwhile, US plans for the region appear to assume that Abadi will remain prime minister after the May 12 elections, which some opposition figures have sought to postpone as 2.6 million displaced Iraqis seek to return to their homes.

The US-led group of 73 nations fighting IS in Iraq did not say how many US troops would leave the country as part of the newly announced shift. US contractors told the Associated Press that dozens of US soldiers have already been transported from Iraq to Afghanistan on daily flights in the past week, along with weapons and equipment.

If Abadi remains head of Iraq’s government, his advisers must “handle the strategic transition to a nation that’s at war with insurgents to a nation that’s at peace,” said James Dubik, a retired US general who oversaw the training of the Iraqi army during the American-led surge in 2007. “We blew it last time.”

Dubik, now with the Institute for the Study of War, a Washington-based military think tank, said the Pentagon-backed advisory mission will have to help Iraq build up capable institutions to sustain its post-IS military. Otherwise, Iraqi military units could melt away just as they did during the IS offensive in 2014.

The United States has already taken some small steps toward figuring out how to build up Iraq’s ability to conduct civilian oversight of the military. In December, for example, President Donald Trump signed a defense bill giving the US Embassy in Baghdad the ability to provide support to the Interior Ministry, which monitors Iraq’s growing police force.

It’s not yet clear how today’s announcement will impact the $1.3 billion that the Pentagon plans to spend to outfit Iraq’s military over the next year. The Defense Department estimates it has spent nearly $770 billion in Iraq since the start of the 2003 war.

Critics, however, warned against Washington’s propensity to declare victory too soon, as may be the case with the Pentagon’s reluctance to label the fewer than 1,000 IS fighters believed to still be left in Iraq as an insurgency.

“[IS fighters] haven’t given up,” Dubik told Al-Monitor. “The fact that we don’t want to call reality what it is is immaterial to them. This is the same mistake some people made in 2010, that al-Qaeda is defeated. Al-Qaeda didn’t look at it that way.”