A Turkish woman who died following gastric sleeve surgery has revived the debate about women’s body image in Turkey. 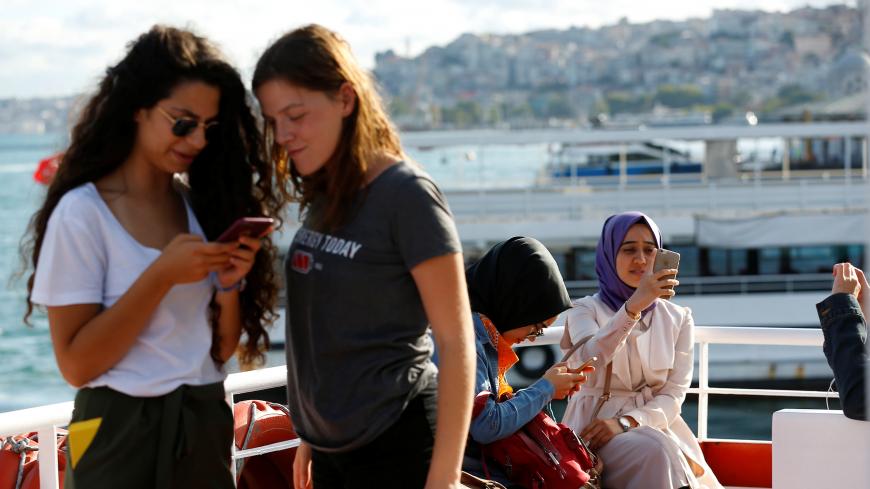 Women use their cellphones as they travel on a ferry over the Bosporus in Istanbul, Turkey, July 4, 2017. - REUTERS/Murad Sezer

The death of 35-year-old Ozge Seker in October shortly after her weight loss surgery has put the spotlight on risky gastric sleeve surgery in Turkey. Her death, due to complications and infection, has brought to the surface the ugly reality of the many unreported deaths all over the country following this type of surgery. While the promotion of this medical intervention as a shortcut for losing weight has become big business, the public is not sufficiently aware of the risks of such gastric surgeries and seems blinded by the media’s reports of celebrities’ overnight weight loss.

Nationwide debate sparked by Seker’s death led to a swift response from the Ministry of Health. On Oct. 20, it released a statement explaining new criteria for gastric sleeve surgery, aiming to minimize the risk of such medical procedures. But the circumstances of Seker’s death, including that she weighed only 78 kilograms (172 pounds) prior to it, alarmed the public. “Have we all become nuts about our body image?” wrote Ayse Arman, daily Hurriyet columnist and one of the most popular female journalists in the country. She continued, “What is the big deal if she was seven or eight kilos heavier than what she idealized? At least she would be alive today.”

Seker is not an exceptional case of a vulnerable woman disturbed by her body image. Many seem eager to go under the knife, and without doing proper research even end up victims of fraudulent “doctors.” A fake doctor in Adana was recently convicted to six years in prison and fined 4,100 Turkish liras ($1,070) for performing lip augmentation on at least four women.

Obesity is on the rise in Turkey and research — scarce as it is — suggests that the rates of negative body image and eating disturbances are also increasing. A high-pressure environment maintained by the media, peers or family contribute to Turkish women's perception of body ideals. For example, when Ajda Pekkan, a 71-year-old pop star, posted a photo of herself cooking last month, “her physique that put young people to shame” was in the news and on social media for days. Comments ranged from people questioning whether her buttocks are real to others, expressing hopes that God would grant them such a physique at that age.

An academic article titled "Body image among female university students in Turkey: concurrent translation and validation of three body image measures" summarizes the arguments of various scholars who say Westernization and modernization helps explain why many Turkish women are now preoccupied with the shape of their bodies. “Glorification of a slender body ideal, the veneration of youth and beauty and insistence of work on the body” are mentioned as cultural values of the West that have very powerful impacts and consequences elsewhere. Article co-authors Viren Swami, Leyla Ozgen and Elif Gokcen say the fact that body size has increasingly come to matter in Turkey — where full-figured women had usually been venerated — has important implications for the treatment of a negative body image by Turkish women.s has important /

Various initiatives aim to help girls and women gain self-confidence and attain self-acceptance, and to encourage men and women to lose their negative image of their bodies. One of the latest initiatives is the “body positivity” movement, which is quickly growing because of the involvement of several women, but primarily feminist and activist Aybala Arslanturk, who has been working on the project for the past year and a half.

She told Al-Monitor that even though she knew it would not be easy, she started the movement intending it to be a gathering space, particularly for women and the LGBT community, who are extensively exposed to body shaming. She did not find the Dove report's findings about Turkish girls’ body image surprising. “With so many ‘ideal,’ ‘beautiful,’ ‘should-be-like’ bodies thrown in front of us — when not conforming is perceived as a great deficiency and reason for shaming — it is impossible to avoid war with our bodies at an early age,” Arslanturk said.

She emphasized that the "body positivity" movement does not target women only, and focuses on the uniqueness of each individual. Arslanturk creates content for the website bedenolumlamahareketi.com ("bodypositivitymovement" in Turkish) and hopes to soon start publishing stories by writers whose message will be in line with the movement. She also organizes workshops, participates in conferences and connects with the public through various social media platforms. Despite criticism that the movement promotes obesity and living unhealthily, there has also been a positive reception by women who recognize the need to change the imposed standards as ideals. “I would like all of us experiencing problems with our bodies to know that we are not alone,” she added.

Unfortunately, the hypersexualization of girls and women seems pervasive and no longer specific to certain countries. Psychologist Renee Engeln coined the term “beauty sickness” to describe how cultural obsession with appearance hurts girls and women. Many of her suggestions on how to help girls have a healthy body image could be applicable across borders.

However, in Turkey, a negative body image and low self-confidence is also symptomatic of the bigger problem — social and gender inequality between men and women, including the traditional belief that women should “please” men. Different narratives that applaud women for their accomplishments and capabilities — rather than for their appearance — could help break the unhealthy tide.