Saudi Arabia could live to regret its warm ties with US President Donald Trump as his foreign policy threatens to undermine its longstanding position as the defender of Muslims and the Islamic world. 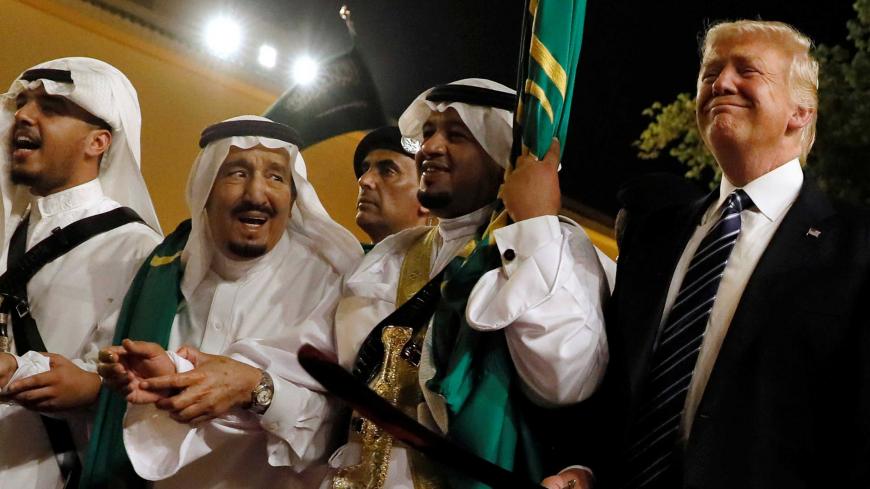 Saudi Arabia was caught off balance by the US administration’s statements this month on Jerusalem and Yemen. The Saudi embrace of President Donald Trump is still intact, but the downside of a close relationship with the mercurial American administration is becoming more apparent to the royal palace.

The Saudi reaction to Trump’s announcement that Washington recognizes Jerusalem as the capital of Israel and will move its embassy from Tel Aviv was slow and almost pro forma, reinforcing the widespread perception in the region that the administration had colluded with Saudi Crown Prince Mohammed bin Salman on the decision. This perception — true or false — significantly undermines the Saudis' longstanding claim to be the most active defender of Muslim rights to the city, and by extension Saudi legitimacy as the custodian of the holy cities of Mecca and Medina, the core of the Saudi royal family’s authority.

The Saudis were outmaneuvered on Jerusalem both by their traditional rival Iran and by Turkey. Even worse for Riyadh, Jordan is posturing as the foremost defender of Arab and Islamic claims to Jerusalem. The Saudis took the Hijaz and the two holy cities from the Hashemites just a century ago. It is very humiliating for the Saudis to appear weak on Jerusalem compared with the Hashemites. The Saudis tried to persuade Jordanian King Abdullah not to attend the Islamic summit in Turkey and then briefly detained a prominent Palestinian-Jordanian businessman to intimidate Abdullah by threatening the Jordanian economy. The Saudi detention of Sabih al-Masri was reminiscent of the detention and forced resignation of Lebanese Prime Minister Saad Hariri in November.

Abdullah remains steadfast, and Jordanian-Saudi relations are cold. The king’s relationship with the US administration is also troubled. The Saudis have urged Trump to reverse the Jerusalem decision, but they will only look impotent as Trump moves forward to relocate the embassy and other countries like Guatemala follow his lead.

The Saudi response took the form of chess. The decision to prevent Israelis from participating in a chess tournament in Riyadh is unremarkable by itself, but in the context of the Jerusalem crisis, it underscores how badly Salman wants to avoid any public engagement with Israel. Look for other moves to distance the kingdom from any appearance of normalization.

The Saudis are even more disappointed by the administration’s policy on Yemen. Until this month, the Trump administration has given Riyadh a blank check in Yemen. Support for the Saudi air war increased, and Washington blamed the war entirely on Iran and Hezbollah, highlighting Iranian assistance to the Houthi missile force.

But faced with the imminent danger of mass starvation, the administration worked with London and belatedly called for the lifting of the Saudi blockade of the north and opening the port at Hodeidah. Riyadh has reluctantly agreed, although it remains to be seen how much aid it actually allows. It is a clear example that American and British pressure can provide results. More should follow.

The Saudi leadership is still opposed to a political solution to the war. Well-informed Saudi commentators have rejected appeals for a lasting cease-fire. They equate the Houthis with al-Qaeda as an enemy that cannot be negotiated with. They press for a military solution akin to the defeat of the Islamic State.

It’s an unrealistic strategy. The Saudi-led coalition has been embarrassed by its failure to plan for the success of their conspiracy with former President Ali Abdullah Saleh to divide the rebel alliance. Saleh’s death has weakened his political party and left the coalition without any pretense of a strategy other than famine.

Nonetheless, the king and his son remain stalwart Trump supporters and have tied themselves to the future of the administration. They are poorly positioned to deal with the likelihood that the White House will be further embroiled in scandal in the new year under scrutiny by the special counsel and the FBI. The Saudis have an energetic but inexperienced ambassador in Washington, and they have struggled in the past to keep abreast of the politics of democracy.

The crown prince is especially vulnerable. He has flaunted his relationship with Trump's son-in-law Jared Kushner. He also owns the Yemeni debacle. Human rights groups are calling for him to be sanctioned, and he has no credentials as an opponent of Israel or a defender of Jerusalem. Rumors eagerly fed by the Israeli press abound that he has visited Israel. His many enemies are only too eager to portray him as a tool of Trump and Israeli Prime Minister Benjamin Netanyahu.