King Salman's visit to Russia is the first by a Saudi monarch, but the trip may be long on style and short on substance. 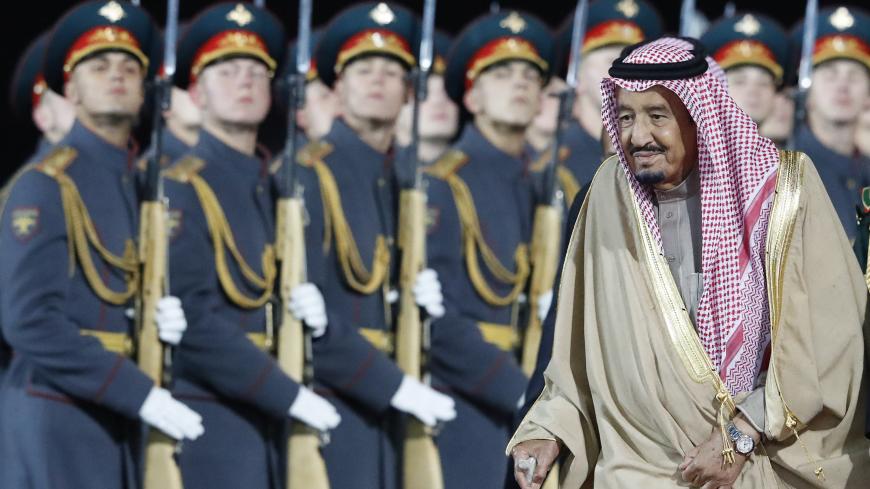 King Salman's unprecedented state visit to Russia signifies a new search for help in the kingdom's foreign policy, which is burdened with a quagmire in Yemen and a losing hand against its regional rival Iran. Riyadh has a long and tortuous relationship with Moscow that the king wants to reshape. However, Salman, who arrived in Moscow on Wednesday night, is likely to get more sympathy than action.

The Soviet Union was one of the first states to recognize Saudi Arabia after the kingdom's founder, King Abdulaziz Al Saud, conquered the Hijaz from the pro-British Hashemites. In 1926, a Soviet embassy was opened in Jeddah. The communists saw the Saudis as an anti-imperialist movement, and the Saudis were looking for allies against the British. The king's son, Prince Faisal, visited Russia in 1932 and met with senior Soviet officials but not Josef Stalin. In 1938, Stalin withdrew the Soviet mission and executed all of its members in the midst of a massive purge in the Communist Party. Relations were not renewed until after the Cold War in 1990.

The Saudis were enthusiastic cold warriors, providing money to anti-Soviet insurgents from Nicaragua to Angola. The centerpiece was Afghanistan, where the Saudi intelligence service allied with the CIA and Pakistani spies to support the mujahedeen. Then-Prince Salman headed a committee to raise private funding for the Afghans. He raised hundreds of millions of dollars from the royal family and other wealthy Saudis to supplement the government money that flowed from Washington and Riyadh via Islamabad to the guerrillas.

Since the Cold War, the Saudis have tried several times to establish a strong relationship with Russia. There have been efforts at establishing an arms-sales relationship and a program to share nuclear technology. Despite repeated attempts, not much has been implemented. Much-promised initiatives have failed to deliver. The most enduring agreement has been to jointly limit oil exports, but this has failed to raise prices, so both economies are hurting. Neither has much capital to invest.

Since 2014, Russia has proven in Syria that it is willing to project military power in the region and prop up its clients. The Saudis are deeply disappointed by the survival of the Bashar al-Assad regime, which they had hoped was the weak link in Iran's regional alliances. The king will want to hear from President Vladimir Putin how Russia plans to use its winning hand in Syria. The Saudis have spent billions in Syria and have nothing to show for their efforts.

Russia was the only country to abstain on the United Nations Security Council resolution that Riyadh uses to justify its 2½-year-old war in Yemen. The Russians said the resolution was unbalanced and unenforceable. Their judgment has been vindicated. Russia has little influence with the Houthi rebels, however, and can offer only its goodwill to help the king escape from his greatest mistake. Finding a way out of the Yemeni morass needs decisions in Riyadh, not Moscow.

The Saudis' concerns about Iran's regional meddling and support for Shiite militias such as the Houthis and Hezbollah will find little resonance in Russia. Tehran enjoys fairly good relations with Moscow and the two cooperate closely, leaving Riyadh without leverage. In Iraq, the king has engaged this year in new and innovative ways and can also look for methods to cooperate with Russia; nevertheless, Iran retains the upper hand in Baghdad.

As the first Saudi king to visit Russia, Salman can let symbolism dominate over concrete actions. The Russians have courted the Saudi visit and have publicly laid out ambitious goals. It is billed as a follow-up to the May visit by Mohammed bin Salman, now the crown prince. Show and gestures will be easy.

The king's trip is also a symbolic balance to the enthusiastic welcome he gave President Donald Trump this spring. That visit was also long on extravagant gestures and short on substantive accomplishment. No arms sales were signed despite lots of extravagant promises. The impressive show of Islamic unity against Iran was immediately undermined by the dispute with Qatar. The Saudis have been disappointed behind the scenes by the failure of the Trump administration to force Qatar to bend to their demands. Given Trump's own curious relationship with Putin, there is no risk of an American backlash for approaching the Russians.

The king's visit does underscore his continued crucial role in the transition to a younger generation in the Saudi leadership. Often dismissed as merely a instrument for his son's rise to power, Salman should not be underestimated. As the symbol of continuity with the kingdom's founder and his sons, Salman's authority and legitimacy is vital to a smooth transition to the next generation. His trip to Russia is the latest in a travel program that has taken him on an extensive series of trips abroad to show the Saudi flag. By doing so the king strengthens the odds for a stable succession.