The historic visit of Saudi King Salman bin Abdul-Aziz Al Saud to Russia was largely symbolic, as his son, who has increasingly taken over the Russia file, stayed home to look after the kingdom. 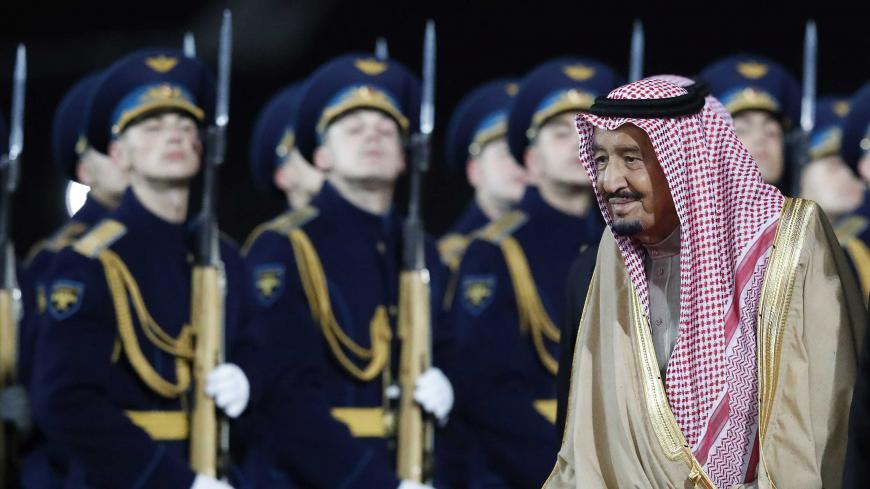 Saudi King Salman bin Abdul-Aziz Al Saud’s first-ever official visit to Moscow made the headlines both in Russia and the Middle East. Rescheduled several times and organized in total secrecy, the four-day visit was dubbed a historic development in Russian-Saudi relations by almost all observers. The sheer size of the delegation accompanying the king, which included senior officials and CEOs, all of whom had an extensive program with Russian counterparts, speaks volumes about the seriousness of the parties’ intentions. The sense that one could get observing the Moscow diplomatic scene this past week was that Riyadh does not have time to nurture a relationship with Moscow and intends to secure a conflict-free partnership with the Russians by fixing all outstanding issues with them in one go.

The impression that Salman's visit was badly needed to kick-start Saudi Arabia’s underdeveloped relations with Russia conflicts with the fact that since he ascended to the throne in January 2015, both countries have been steadily increasing cooperation. The king’s son, Mohammed bin Salman, who seems to be increasingly taking over the Russia file, has visited Russia and met with President Vladimir Putin several times over this period. It was Mohammed who signed energy and investment deals with Moscow, and it was on his watch that Russia and Saudi Arabia negotiated oil production cuts.

Indeed, Salman’s visit to Moscow is not a prerequisite for building cooperation between the two governments across various sectors. In fact, this visit appears to be slightly underwhelming for observers in that it did not result in agreements that couldn’t have been routinely signed. The outcome makes a stark contrast to the efforts invested in setting the right scene for Salman’s trip.

This was largely a symbolic visit of the Saudi monarch to Russia whose significance should be interpreted through the historic context of the bilateral relations rather than through its political meaning for modern-day ties. After all, the key figure that Moscow now sees as the main Saudi policymaker, Prince Mohammed, did not make it to Russia and stayed in Riyadh as the acting ruler in the absence of the king. In other words, in relations with Moscow, Salman and Mohammed have swapped roles — the monarch’s trip to Russia was probably significant as a diplomatic courtesy but had limited political meaning attached to it.

Moscow may have sensed these intricacies and approached the visit cautiously, too. This would explain why upon his arrival, the king was greeted by Dmitry Rogozin, the deputy prime minister in charge of defense industry, instead of the president or prime minister, which would normally be the case with guests of Salman’s caliber.

Over the past two years, it seems that Riyadh and Moscow managed to compartmentalize their relationship and separate political issues that are toxic for bilateral ties, such as the war in Syria, from mutually beneficial economic cooperation. When Salman became king in 2015, he opted for a more subtle approach to dealing with Russia than his predecessor.

It was during the reign of late King Abdullah bin Abdelaziz that Moscow started making a modest comeback to the Middle East when it threw its weight behind Syrian President Bashar al-Assad in the Syrian war and derailed attempts to overthrow him. This was arguably the development that erased previous efforts to normalize the relations with Abdullah, harshly criticizing Russia for its stance and essentially denying it the place that Moscow seemed to have been claiming in the Middle East. Abdullah approached Russia with ultimatums on Syria as well as with offers that Moscow seemingly couldn’t have refused. In 2013, for instance, reports stated that Riyadh had offered Moscow lucrative deals in exchange for dropping support for Assad.

A reassessment of the Saudi policy on Russia was facilitated by Salman; the king prioritized economic cooperation in his relations with Moscow without attaching any political demands to it. Now that the time has come to upgrade their ties, the political disagreements that have existed for years and demands that have not been pronounced up until now are inevitably coming to the fore and overshadowing any genuine desire to focus on the economy rather than politics.

The reservations on both sides have to do chiefly with their disagreements over Iran and its expanding regional role. In the context of the ongoing bargaining over Syria, Riyadh is making overtures to Moscow demonstrating willingness to welcome Russia’s comeback to the Middle East that could help contain Iran’s growing power. Extraordinary efforts invested in the visit of the king to the Kremlin are indicative of Riyadh’s attempts to position itself as a new strategic partner for Russia in the Middle East and to rid Iran of its main international backer.

Moscow, however, is willing to play this game as long as it can get political benefits, too. In this context, Saudi participation is key to Russia’s attempts to settle the Syrian crisis. With Russia essentially owning this crisis, the anti-Assad coalition has reconciled with the idea that the Syrian president has won the war. Riyadh is one of those powers that have significantly scaled down their support for the opposition movement, essentially recognizing Russia’s dominance in Syria.

The issue of how to legitimize the outcome of the Syrian conflict in Geneva is something that Russia still needs to address. Given Saudi attempts to consolidate the Syrian opposition under the brand of the High Negotiations Committee, Moscow counts on Riyadh’s assistance in bringing the opposition to Geneva and advocating the political settlement of the Syrian conflict whose contours are already visible.

The Saudi role in facilitating the resolution of the Syrian conflict, however, goes far beyond the Geneva process. Assad staying in power does not necessarily mean that his regime would earn international recognition, just like there is no guarantee that the world community would be on board with the efforts to reconstruct the country.

By engaging Saudi Arabia in developing modalities of the Syrian settlement, Moscow is looking to share the financial and political responsibility for the future of the country. Russia dreads inheriting a destroyed Syria that would spell more problems for the Kremlin rather than symbolize the triumph of its diplomacy.

It seems that Salman’s much-discussed visit to Moscow did not produce any tectonic changes in the relations, as was expected of it. However, it may have become a necessary step toward breaking the ice between the two countries, much of which is rooted in their historical perception of one another. It was limited in its economic and political outcomes solidifying Mohammed’s reign over the Saudi relations with Russia.