Saudi Arabia and Russia have been overlooking their differences, focusing instead on their mutual energy interests, but it might prove hard to ignore the elephant in the room indefinitely. 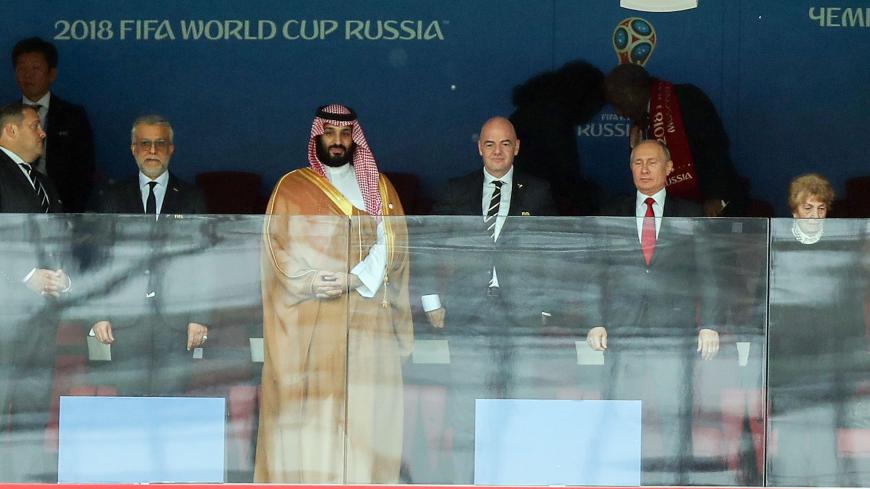 As the Russian and Saudi soccer teams met June 14 in the opening game of the World Cup in Russia, so did the Russian president and Saudi crown prince, as they watched the game and discussed their countries’ relations.

Crown Prince Mohammed bin Salman seems to have established a close working relationship with President Vladimir Putin. Putin has lauded Mohammed, who last visited Russia in May 2017, for his cooperative nature.

While the Russian and Saudi soccer teams are hardly going to shape the outcome of the World Cup, the Putin-Mohammed relationship might have a long-lasting impact on both countries. The leaders clearly had plenty of issues to discuss. Among them, their November 2016 agreement on oil production cuts featured prominently, as the global energy market is witnessing a spike in oil prices against the backdrop of instability in Venezuela and the United States quitting the Iran nuclear deal.

On his trip to Moscow, Mohammed was accompanied by Minister of Oil Khalid al-Falih. The minister and his Russian counterpart, Alexander Novak, took part in talks between Putin and the crown prince at the Kremlin. During the meeting, each side praised the other for the consistency of their contacts, specifically focusing on the Vienna Agreement, or OPEC-plus deal, an arrangement between OPEC and some other oil producers to decrease oil output.

Moscow and Riyadh need to coordinate their positions ahead of the crucial June 22 OPEC meeting in Vienna. What complicates the upcoming meeting, and what Russia and Saudi Arabia will be facing as a unified front, is a lack of consensus among the 24 countries that signed the agreement in 2016. Russia specifically may find it hard balancing its own interests and those of Tehran, whose output is likely to fall by 900,000 barrels next year because the United States has reimposed sanctions. In these circumstances, Iran would want to export as much oil as it still can at higher prices, something Russia and Saudi Arabia seem determined to undermine by increasing global output. The latter two countries have agreed that it is necessary to increase output; however, the mechanics and extent of their understanding are likely to remain unknown until the Vienna meeting.

Coordination on energy issues seems to be acting as glue, uniting Russia and Saudi Arabia in a region where their other positions are extremely polarized at the moment. Traditional disagreements over the settlement of the Syrian civil war have been further exacerbated by divergent views on the role of Iran in the region, as well as the Saudi-led campaign to isolate Qatar for allegedly harboring terrorists, which it denies.

Russia has intentionally remained neutral regarding the blockade, despite numerous attempts by both sides to woo Russia in the matter. Starting in the summer of 2017, both Saudi Arabia and Qatar went on charm offensives in Moscow. Saudi Arabia in October arranged the first-ever visit of a Saudi king to Russia. Moscow, however, remained adamant in its position.

With the blockade of Qatar clearly losing its momentum after a year of futile attempts to make Doha bend under pressure, Riyadh did what could potentially be seen in Moscow as an unfriendly act. Fearing Russia might deliver its S-400 defense systems to Qatar, King Salman bin Abdul-Aziz Al Saud sent a letter to French President Emmanuel Macron. In this letter, Salman threatened to take military action against Qatar if Russian weapons wind up in Doha and asked Macron to convince Qatar to backtrack on the deal.

Though Russia and Qatar are only in the early stages of talks on S-400 delivery and it’s not clear whether they will even proceed with the deal, Riyadh’s attempts to interfere in Moscow’s dealings with other regional states may unsettle Putin. These attempts are worrying to Moscow in that they increasingly look like a page out of the US playbook, which is working toward derailing Russia’s S-400 contract with Turkey. But most importantly, Salman and Mohammed’s brinkmanship policy is reminiscent of Prince Bandar bin Sultan Al Saud’s days as the head of Saudi intelligence. The latter will go down in Russian history as a Saudi official who tried to coerce Putin into changing his foreign policy in Syria in 2013.

Russian-Saudi relations appear to have been effectively compartmentalized. The two countries parade issues they easily agree on, but don’t mention problems that are toxic for their partnership. The elephant in the room has traditionally been Iran, but Tehran hasn’t been featured in any official readouts from Russian-Saudi meetings of recent months. However, it’s hard to imagine that Riyadh would avoid discussing what it has labeled as the main threat to Mideast stability.

The issue of Iran’s expanding presence in the Middle East may not have been the top issue on the agenda when Putin and Mohammed met last week, but Moscow holds the key to containing Tehran in the region and Riyadh is aware of that. Moscow, however, doesn’t necessarily see Iran’s role in the Middle East as a threat to regional security. In fact, top Russian officials have been seeking to create a regional security organization that would include the two Gulf rivals.

The confrontation between Iran and its regional rivals may no longer be a zero-sum game, as recent events in Syria have shown. Israel has applied enormous pressure on Iranian forces supporting Syrian President Bashar al-Assad, forcing Russia to seek consensus with Tel Aviv on Tehran’s presence in Syria. That has led to a rumored agreement that Moscow would facilitate Iran’s withdrawal from southern Syria. Israel’s assertive action against Tehran may have given the Saudi crown prince the impression that Russia has finally become amenable on the issue of containing Iran. That might make this the right time to try to drive a wedge between Assad’s two allies. Lebanese Prime Minister Saad Hariri, who has lately doubled down on criticizing Iran and is traditionally close to Mohammed, met with Putin in Moscow a day before the Saudi crown prince’s visit, which arguably helped deliver the message to the Kremlin on the perceived Iranian threat.

Instability in the energy markets appears to be a stabilizing factor for Moscow-Riyadh relations as they find themselves in the same boat seeking a pragmatic solution to the oil crisis. However, for the time being, both sides live under the illusion that occasional coordination and shared interests in the oil industry can replace a full-grown relationship. In the meantime, political disagreements keep piling up but are pushed to the back burner. An extreme compartmentalization of Russian-Saudi relations to an extent where contentious issues are simply hushed up risks creating more instability in the long term once the price of staying in the OPEC-plus deal exceeds the price of leaving it.