Oil dealings between Moscow and Riyadh raise suspicions in Tehran, but Iran may soon learn they have a silver lining. 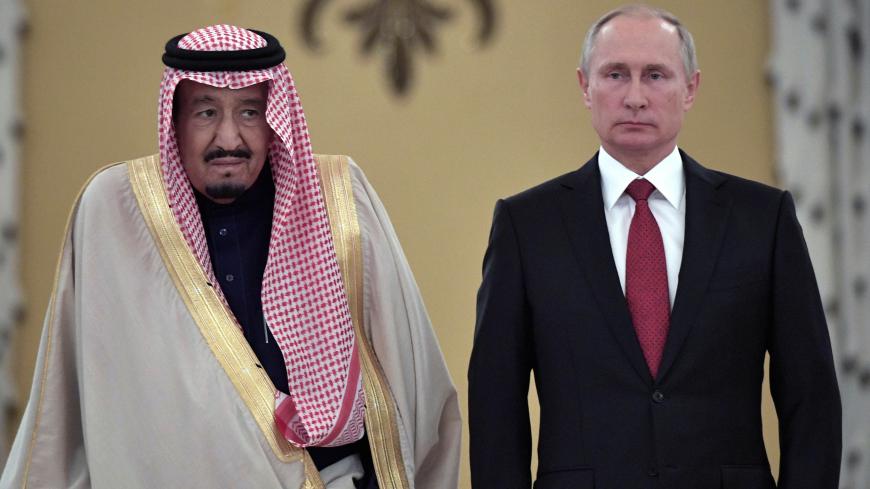 Russian President Vladimir Putin (R) and Saudi Arabia's King Salman attend a welcoming ceremony ahead of their talks in the Kremlin in Moscow, Russia, Oct. 5, 2017. - Sputnik/Alexei Nikolsky/Kremlin via REUTERS

Tehran is irritated and concerned by recent talks between Moscow and Riyadh on a mechanism to exert greater control over world oil markets.

On Feb. 18, Russia’s President Vladimir Putin spoke by phone with King Salman bin Abdul-Aziz Al Saud of Saudi Arabia. “The two leaders praised the high level of cooperation achieved, including in trade, economic and investment areas," read an official Kremlin statement. "When exchanging views on the global hydrocarbon markets situation, the parties reaffirmed their readiness to continue coordination between Russia and Saudi Arabia.”

Earlier this month, the Saudis reportedly made an effort to create a new structure to regulate the oil market. The institution is expected to be formed on the basis of the 2016 Vienna agreement — a deal between OPEC and 10 non-OPEC countries (the so-called OPEC+) to temporarily limit their oil output to stabilize the oil market and ensure the growth of oil prices. Since 2016, this agreement has been extended several times and has partly managed to achieve its goals. However, the experience of the past two years clearly shows that, to impact the oil market, temporary measures are not enough.

Instead, there is a need for a forum-like structure that would monitor the situation in the market and, when necessary, take practical steps to regulate the volume of oil production by its members to ensure the balance between supply and demand. Under these circumstances, it was natural for Saudi Arabia and Russia, as informal leaders of OPEC+, to suggest the creation of such a new structure.

Yet this idea was not well received by Iran and some other members of OPEC+. Tehran has since periodically voiced its concerns that Moscow and Riyadh will dominate the new organization and ignore the interests of other players.

To a certain extent, the Iranian leadership has reasons for being cautious about the new structure. The ongoing political and ideological confrontation with the kingdom makes Iran suspicious about organizations where Riyadh can have stronger influence. In the past, Iran and Saudi Arabia represented the two different camps of OPEC and had different views on the strategies the oil cartel should pursue. During the late 1980s and until the mid-2010s, Saudi Arabia supported the idea that OPEC was to secure its oil market share through affordable prices and extensive output. Iran, on the contrary, struggled to maximize profits by supporting decreased output. During the last 25 years, Tehran only rarely agreed on terms with Riyadh at OPEC, and the Saudi delegation was much more effective at imposing its views on the other members of the cartel. As a result, the Iranian leadership came to see OPEC as a Saudi-controlled entity.

Indeed, Iran’s oil production costs are high, and its main production sites are aging. Furthermore, sanctions and technological and financial problems continue to limit Iran’s production and export capacities. To have a say in OPEC+, a country must have a high volume of production; spare output capacities; and the ability to change the output within the wide range of volumes. The Saudi oil sector perfectly fits within these parameters. Consequently, this determines the dynamics of the Russian-Saudi dialogue at OPEC+.

Tehran also does not trust Moscow, another leader of OPEC+. As a result, Tehran sees the intensification of Russian-Saudi contacts in OPEC+ as the creation of a new unholy alliance against Tehran. Iran has already accused Russia and Saudi Arabia of attempting to use the opportunities created by sanctions to squeeze Iran’s oil out of the market.

Nevertheless, the words alliance or partnership should be cautiously applied to the Russian-Saudi dialogue at OPEC+. Market experts interviewed by Al-Monitor argued that Moscow is counting on the psychological effect of the deal on oil prices rather than on the practical effect from the decrease in OPEC+ members' output. This, in turn, makes it less certain whether Russia will comply with the demands of the agreement. While it is still doubtful that Moscow joined the agreement with no intent to implement it, compliance has been a periodic problem for Russia.

In December 2018, Russia agreed to scale down oil output only on the condition of a gradual decrease. This can be explained not just by the high fuel consumption rates in Russia but by the fact that Moscow has problems persuading its own corporations of the necessity for oil cuts. As a result, it has to find a balance between its own corporations and OPEC+ obligations to turn a blind eye to some deviations in production quotas by its members. This must irritate the Saudis, who take their obligations much more seriously: When necessary, Riyadh can even decrease its share beyond the agreed-upon level. Finally, the prospects of the Russian oil industry are gloomy. It is expected that after 2020, Russian oil production will start falling, yet Riyadh is confident in its own industry’s future. Under these circumstances it’s not clear whether the Saudi authorities will remain interested in closely coordinating their efforts with Moscow.

There are also serious doubts that the new formalized OPEC+ is going to be effective. It's not only Russia that has compliance problems. In January 2019, OPEC members were at 86% compliance with output targets, with non-OPEC members of the Vienna agreement at 25% compliance. Additionally, many players, including Iran, could be characterized as free-riders. Due to different reasons — sanctions, domestic instability or economic problems — they cannot ensure stable output or support oil production cuts, although they still participate in the organization and profit from higher oil prices.

Consequently, the chances for further success of OPEC+ efforts depend on other factors, such as the volume of US shale oil production, tempos of international economic growth, emerging political (in)stabilities and dynamics of global commercial oil reserves. Thus, the next OPEC+ decision on the further extension of production cuts might depend on whether the United States decides to extend the sanction waivers to some importers of Iranian oil.

Currently, neither Russia nor Saudi Arabia are interested in taking steps that could harm Iran's interests. Previously, Moscow and Riyadh did not earn additional dividends from Tehran’s limited abilities to export its oil. Moreover, the Russian side repeatedly argued that it would try to help Tehran secure its access to the oil market. In the past, Saudi Arabia has tried to avoid excessive politicization of OPEC, attempting to limit the influence of political conflicts between its members on the cartel's behavior. There is little doubt that the kingdom will stick to different politics in the new organization. Yet both Russia and Saudi Arabia are interested in keeping oil prices above $50 per barrel. This corresponds to the interests of Tehran, whose 2019 budget is designed on the calculation that oil will cost at least $54 per barrel. Under these circumstances, Tehran should also be interested in the success of the Saudi and Russian efforts to make this organization effective.

Iran’s concerns are exaggerated and driven by political paranoia. Indeed, Russia and Saudi Arabia can be much more influential in the future organization. Yet it does not mean they will want to or can use it against Iran. On the contrary, it can help all three countries to keep oil prices high. As a result, after some deliberation, Iran may eventually support the formalization of relations between OPEC+ members.