Russia and Saudi Arabia sign a dozen business deals but it is unclear whether Syria disagreements were resolved. 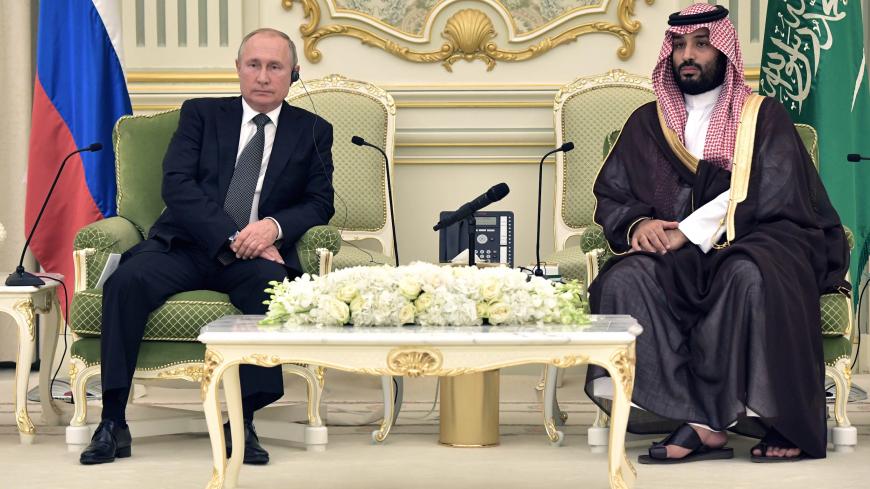 RIYADH, Saudi Arabia — When Saudi King Salman bin Abdul-Aziz Al Saud came to Moscow in October 2017, a popular joke in the city about the size of his motorcade was that it had as many vehicles as there were letters in the royal’s full name.

In Riyadh, Russian President Vladimir Putin’s motorcade was composed only of his Aurus Senat limousine but it was the 16 beautiful Arabian horses that accompanied the vehicle that showed the Saudis intended to give him a reception fit for a czar.

As in Moscow two years ago, Putin and Salman used the opportunity to further develop a better “personal chemistry,” including by exchanging gifts. The king presented the Russian president with a traditional Arab ornament. Putin, in turn, gave the Saudi royal a Kamchatka falcon symbolically named “Alfa” trained to hunt game birds.

What was different, however, is that if the king’s visit to Moscow in 2017 was an attempt to turn Russia-Saudi “relations” into a “relationship,” this time, Putin sought to fill this relationship with some substance that was long missing between the two states. Driven by this idea, Putin brought with him to Riyadh almost all state ministers and around 100 top Russian tycoons and other business executives.

“We see Russian-Saudi coordination as an indispensable element for ensuring security in the Middle East and North Africa. I am convinced that without your country, it is hardly possible to achieve a just and long-term settlement of any problem in this region,” Putin told Salman in his introductory remarks.

“We consider Saudi Arabia to be one of Russia’s leading economic partners,” Putin said when addressing the Russian-Saudi Economic Council.

Before Putin landed in Riyadh, Russian and Saudi businesses and state agencies signed 20 joint cooperation agreements. In the presence of the Russian president and the Saudi king, 21 more deals were signed.

“Our trade is growing. Last year it increased by 15% and grew by another 38% in the January-July period. With your support, the PIF has allocated $10 billion for joint projects with the RDIF. The mechanism of automatic co-investment is also functioning well. We have reached agreements on new initiatives involving Saudi investment,” Putin replied.

Following the talks between Putin and Salman, Kremlin spokesperson Dmitry Peskov said that military and technical cooperation also was discussed.

“There is nothing to say yet [about possible S-400 missile system sales to Saudi Arabia], but there are plans. We are hoping that this military cooperation dialogue will be continued," Peskov said.

In the runup to the visit to the kingdom, Putin said Moscow and Riyadh “have a good plan for joint activities in the military and technical cooperation sphere.” He stressed that Saudi Crown Prince Mohammed bin Salman is “particularly interested” in this area.

The crown prince hosted Putin for separate talks. Syria, Yemen, oil prices and the bilateral relationship dominated the agenda. The Saudi state agency reported that the two emphasized “the importance of combating extremism and terrorism and working to dry up its sources.”

Moscow and Riyadh signed a key oil deal to bolster cooperation between the OPEC oil cartel and non-members such as Russia. Prior to the Saudi visit Putin spoke of the need to decrease oil stockpiles to “reasonable levels” so that they “don’t put pressure on prices.”

“I very much like the words of President Putin. He understands we need to take any steps to prevent turmoil in the market. We need to take some additional steps to ensure the stockpiles are back to normal but let’s see what we come up to [at the OPEC-plus meeting] in December,” Saudi energy minister Abdulaziz bin Salman told Russian journalists.

Among other deals the Russians considered “breakthroughs” are initiatives on joint research on artificial intelligence, railway construction in Saudi Arabia and agricultural cooperation. Russia finally secured access to the Saudi wheat market — something Moscow was unable to do for many years. Russia’s agricultural industry led by Dmitry Patrushev, son of Russian Security Council Secretary Nikolay Patrushev, is studying Saudi regulations on phytosanitary control in this field.

Russian and Saudi culture ministers signed a five-year memorandum on bilateral cultural cooperation. It envisages exchange programs for culture sector employees and performers, joint participation in cultural and art events as well as cooperation in museum affairs, librarianship and filmmaking.

For a long time, Russia’s approach to the Saudis was perceived primarily through the lens of confrontation and tug of war for regional influence with the United States. While this aspect is certainly there, Putin’s visit was meant to signal that Moscow sees a lot of “self-value” in relations with Riyadh. For Russia, Saudi Arabia has become a critical source of investment, a vital energy market co-regulator and an indispensable security partner. Putin’s messages, meetings and deals sought to pierce through all three “domains.”

Even if for the Saudis the outreach to Russia to a significant degree remains both a bargaining chip and a hedging strategy in relations with Washington, Moscow believes that building more bilateral links will eventually help construct a more solid relationship. Perhaps this is the reason why there was far less attention to the United States or Iran — at least in the public mention — than during Salman’s visit to Moscow in 2017. In this respect, contrary to expectations, there wasn’t much “direct promotion” of the Russian Gulf Security initiative. Yet Putin wasn’t shying away from subtly positioning Russia as a shrewd outside security provider to the region.

Putin said, “Such a big country as Iran, which has been around for some thousand years, they simply can’t not have their own interests. In order to understand all of the nuances here, settle all disputes, there should be a dialogue. So I can understand the concerns of both the Saudis and the Emiratis [vis-a-vis Iran]. Moscow could assume a role of a mediator but there’s no need in it. It’s only these countries themselves that can settle these disputes.”