Russian President Vladimir Putin and Saudi King Salman reached around their differences to sign lucrative agreements and improve relations, but the differences are still there. 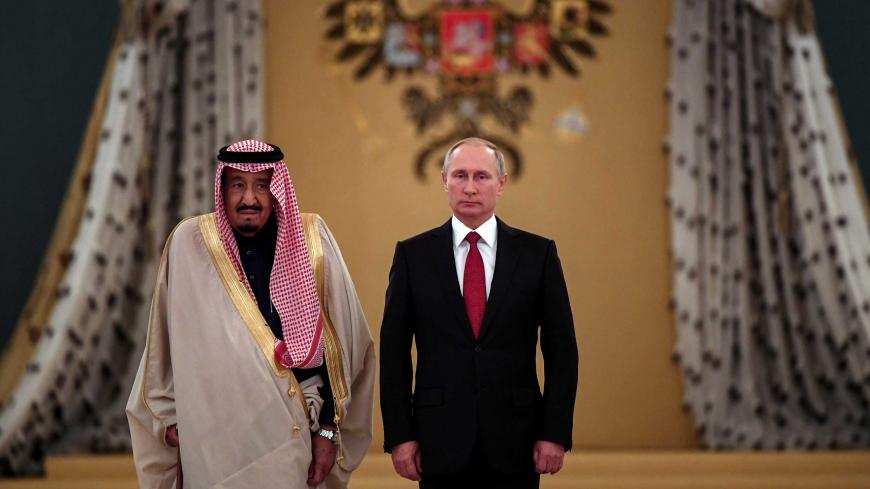 The Saudi king’s visit to Russia this week was an event Moscow has been anticipating for many years. Amid recent years' flurry of visits by Middle Eastern leaders, the Saudi monarch arguably had been the only one missing. So when he eventually came on Oct. 4, the king “received a czar-level reception,” wrote Andrey Kolesnikov, a Russian journalist of the Kommersant newspaper who's been covering Vladimir Putin's presidency for many years.

In Kolesnikov's view, not only was the trip historic in that it was the first state visit to Russia by a sitting Saudi monarch, but it was also “unprecedented in that the big Kremlin Palace where [the meeting] took place on Oct. 5 needed a light reconstruction to meet the demand of the Saudi party to make possible the king’s movement in a special electric car around the palace.”

“It wasn’t difficult [on the engineering side] but was done as a sign of respect to the king," Kolesnikov observed.

The visit, however, didn't get off to an easy start. In the Vnukovo Airport, the king was met by Deputy Prime Minister Dmitry Rogozin — a representative not of the level one would expect for a visit of this caliber. What detail-picky journalists found even more remarkable was that under his coat, Rogozin was wearing a blazer — a weird outfit to welcome royalty — and walked by the king on his way to the limousine, which is also an extraordinary protocol oversight. Given Rogozin’s duties of coordinating operations of the Russian military-industrial complex, his presence as the welcoming official could be seen as a reminder to the Saudis of Russia's growing military presence in Syria and of the multibillion-dollar contracts Russia was about to sign to sell the Saudis Russian weaponry. These two themes played loudly all during the visit.

Days before the visit, Moscow was plastered with billboards celebrating Russian and Saudi culture. The route from the airport to downtown Moscow, where the king and his delegation would reside, was decorated with posters picturing the king and welcome messages in Arabic and Russian. During the few days of the visit, the king’s motorcade moving through the city drew lots of attention and gave birth to a Russian joke that the king had as many vehicles there as there were letters in his full name: Salman bin Abdul-Aziz Al Saud.

Putin did his best to impress the Saudi monarch with Russia’s own might by hosting the Saudis for talks in one of the most beautiful chambers in the Kremlin. The Russian president also felt obliged to thank the king for his hospitality during Putin’s visit to the kingdom in 2007 — when Salman was governor of Riyadh — by personally escorting the king on a Kremlin tour.

Following the bilateral talks, both leaders sat down to sign and exchange a range of agreements, then headed to lunch without making any statements to the press. Later in the day, the king met with Russian Defense Minister Sergei Shoigu with an agenda of “the bilateral military cooperation and the broader security situation in the Middle East."

Remarkably, Chechen leader Ramzan Kadyrov was also present at the talks. Heads of other traditional Muslim regions of Russia — Ingushetia, Tatarstan and Bashkortostan — who also have business and other connections with the kingdom were present at the welcoming ceremony for the king. Yet, as an insider to the Russia-Saudi talks told Al-Monitor, “Kadyrov has gotten the upper hand in an internal struggle over who gets to represent Russian Muslims in dealings with the [kingdom].”

The nature of ties between Moscow and Riyadh wasn't fundamentally different after the king's visit, but both parties saw it as an opportunity to develop a better “personal chemistry” and turn “relations” into a “relationship,” thus all the pomp. What mattered, though, was how to fill this “relationship” with something substantial. A retired Russian diplomat remarked in a private conversation, “The issue is pretty clear: The Saudis have the money, which the Russians need. But the Saudis need the Russians to stop what they see as a strengthening Iran, and Russians just can’t deliver it — at least not to the extent the Saudis would want it.”

"The Saudis have the money, which the Russians need. But the Saudis need the Russians to stop what they see as a strengthening Iran, and Russians just can’t deliver it."

Indeed, the slew of deals the parties signed is important to Russia, given its alienation by the West. With these deals, the parties agreed to do the following: set up a $1 billion joint investment fund; invest some $100 million in transport projects in Russia through the Russian sovereign wealth fund and Saudi Arabia’s Public Investment Fund; cooperate on potential projects between Saudi Arabia and Russian petrochemicals firm Sibur; and possibly prolong the OPEC agreement and other energy deals. Russian Energy Minister Alexander Novak has been a key figure throughout the oil talks.

The overall framework of the relationship, however, has barely changed. Grigory Kosach, Russia’s leading academic expert on Saudi Arabia, told Al-Monitor that Russia and Saudi Arabia don't actually know what they want from each other.

"There are always meetings assembled, talks held and agreements negotiated, but nothing gets done. In overall Russian foreign trade, the trade with the [kingdom] is about 0.1%, which is like that between Russia and Palestine. Even with this visit, there was a lot of hype around it. But the results are rather modest just yet," Kosach said.

The blueprint behind the agreements is that Moscow decided to help Riyadh develop its own military industries by agreeing “to transfer the technology and localize the manufacturing and sustainment of these armament systems." Yet the Russian party insists that the “localization” component should be minimal, while major components should be produced exclusively by the Russian state-owned Almaz Antey arms producer. Concrete details on each agreement, however, are to be discussed at an intergovernmental Russian-Saudi session on military-technical cooperation in late October. If the deal goes through, the kingdom may be the third foreign country to own S-400s after China and, possibly, Turkey. So far, even the current agreements are seen as a success in Moscow, given that Russia has been trying to access the Saudi market for more than a decade.

Kosach argues that the military cooperation between Russia and Saudi Arabia isn't likely to really happen, since “the Saudi military is on full life support from Americans and to a lesser extent the British and French."

“For the Russia-[Saudi] relations to truly work, Moscow would need to amend its relationship with Tehran to the extent it is not an irritant for Riyadh. Until then, it’s going to be beating around the bushes," added Kosach.

In a reminder of their differences, as Putin and Salman dined in the Kremlin, news broke that the Islamic State (IS) had killed two Russian captives allegedly serving a private military company fighting on the side of the Russians for Syrian President Bashar al-Assad, whom the Saudis stridently oppose.

And even as Russian Foreign Minister Sergey Lavrov and Saudi Foreign Affairs Minister Adel al-Jubeir were discussing the need for all parties in Syria to communicate with each other, Russia was shelling IS and Hayat Tahrir al-Sham, while battles were escalating between the Syrian army and other opposition forces, including the US-backed Syrian Democratic Forces. The situation increasingly looks like the worst crisis in Syria since Aleppo.

So even though the king's visit was fruitful, the key issues that have stalled Russian-Saudi bilateral progress remain in place.