Clashes escalate across Palestine in response to Trump's Jerusalem move

Following US President Donald Trump's recognition of Jerusalem as the capital of Israel, Palestinians took took to the streets in protest for a second day as clashes with Israeli forces increased. 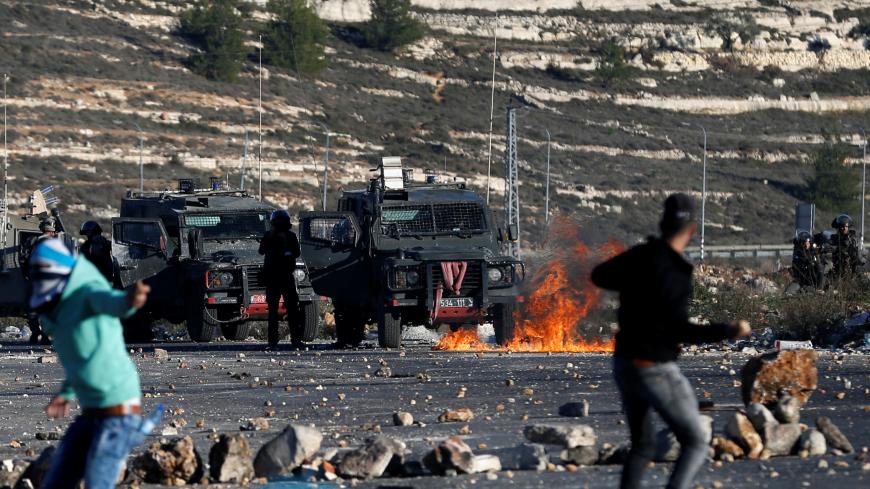 Palestinian protesters hurl stones toward Israeli troops during clashes in response to US President Donald Trump's recognition of Jerusalem as Israel's capital, near the Jewish settlement of Beit El, near the West Bank city of Ramallah, Dec. 8, 2017. - REUTERS/Mohamad Torokman

Gunshots continue to be fired across the West Bank and Gaza Strip as it enters the second day of resistance against US President Donald Trump’s recognition of Jerusalem as the capital of Israel. Though it is just a recognition, by one of the most powerful states nonetheless, Palestinians across the country are fueled with anger by the thought they are losing their capital and religious home.

The Palestine Red Crescent Society confirmed on Dec. 8 that during the first day of protests on Dec. 7, one person had been killed in Gaza. Across the West Bank and Gaza, 13 protesters were injured from live fire and 47 from rubber bullets.

Protest numbers were expected to be bigger on the second day of the resistance, as Dec. 8 was a declared a “day of rage” by Palestinian President Mahmoud Abbas. In the West Bank city of Ramallah, imams could be heard calling everyone to gather in the larger mosques of the city, so there would be solidarity in numbers.

The message the imams delivered at midday prayers called for everyone to protest the US decision and defend their country. If people were able to and they weren’t restricted by Israeli permit limitations, they were told to travel to Al-Aqsa Mosque in Jerusalem for Friday prayers and demonstrations.

In the end, at protests and clashes in Ramallah, specifically at the Beit El checkpoint in the north, fewer people turned out than yesterday; an estimate can be made of 300 people rather than the 1,000 the day before.

Even so, the Israel Defense Forces (IDF) displayed more force than on Dec. 7, this time pushing the Palestinian youth back from their positions, making ground of at least 50 meters. The soldiers used live ammunition, rubber bullets and tear gas on around 100 young men and women, who were slinging stones and lighting fires as defense against the approaching army.

Tear gas rockets made it as far as the nearby apartment buildings, as youth ran to hide behind the walls. Glass fridges outside the nearby petrol station were shattered by rubber bullets, rendering them no longer a safe place to hide behind.

In Jerusalem itself, demonstrations began directly after midday prayers at Al-Aqsa Mosque. Worshippers emerged from the mosque and circled the Dome of the Rock, chanting slogans against the US decision before raising the Palestinian flag. They then made their way to Damascus Gate, where the IDF attacked the protesters, pushing several women to the ground. There was no difference between men, women and children in the force the soldiers used.

The IDF soon after closed Damascus Gate, restricting entrance into the Old City, and pushed everyone out of the area. No injuries were sustained, nor were any arrests made.

Many youth in Ramallah demonstrating against Jerusalem as the recognized capital of Israel had never been able to visit the holy city, due to permit restrictions issued.

Ali, 21, said it was especially difficult to go there for young people. “The children, 20, 30 years old, they can’t go to Jerusalem or Al-Aqsa Mosque because the Israelis don’t see any good in the Palestinians,” Ali said, pointing to the terrorist profile given to younger men.

Ali said he would continue to protest until Israel’s occupation and restrictions were lifted. “Jerusalem, it’s in my heart. I will keep coming back every day until we have freed Jerusalem and Al-Aqsa Mosque,” Ali said.

Many youth within Ramallah echoed Ali’s struggle, some saying they wouldn’t return to university until the occupation forces withdrew from Palestinian land. Issa, 21, who studies engineering at nearby Birzeit University, said he would not return to classes. “I’m going to keep resisting. We need to defend our country. We have to kick out the occupation from Palestine,” Issa said passionately. The young student had also never been to Jerusalem, though mentioned it had always been his dream to go.

Silwa, an East Jerusalem resident, believes the Palestinians would win this battle with the United States and Israel. She referred to their past success in Israel taking down metal detectors at the entrance to Al-Aqsa Mosque earlier this year. Mass protests broke out over the change to such an important religious landmark and the hindrance placed on worshippers entering the compound. “We are here again today [to] show all the world our struggle. When they put electronic gates in Al-Aqsa we broke them, and we won,” Silwa said, optimistic in her defense of Jerusalem as the capital of Palestine.

Palestinians across Ramallah, particularly youth involved in clashes at Beit El, said they are fed up with the Palestinian Authority (PA). Protesters said Palestinian President Mahmoud Abbas should have directly cut ties with Israel after Trump’s announcement.

Samir, 22, said he rejects the PA and Abbas as his leader. “Abbas is selling Al-Aqsa to Israel,” Samir said angrily. Some of the youth in Beit El said they would rather support Hamas because they have called for an uprising. As Hamas leader Ismail Haniyeh stated shortly after Trump’s official announcement, “We should call for and we should work on launching an intifada in the face of the Zionist enemy.”

Even with numbers seemingly waning at demonstrations across the West Bank and East Jerusalem, those at the forefront of clashes with the IDF are expressing this battle as the start of an intifada. “This is important, this is the third intifada,” Samir said.

Depending on whether numbers at protests dwindle even more on Dec. 9, we will see if an intifada has truly emerged.