Rivals of Palestinian President Mahmoud Abbas within the Fatah movement are using the US president's Jerusalem proclamation to advance themselves ahead of the succession battle. 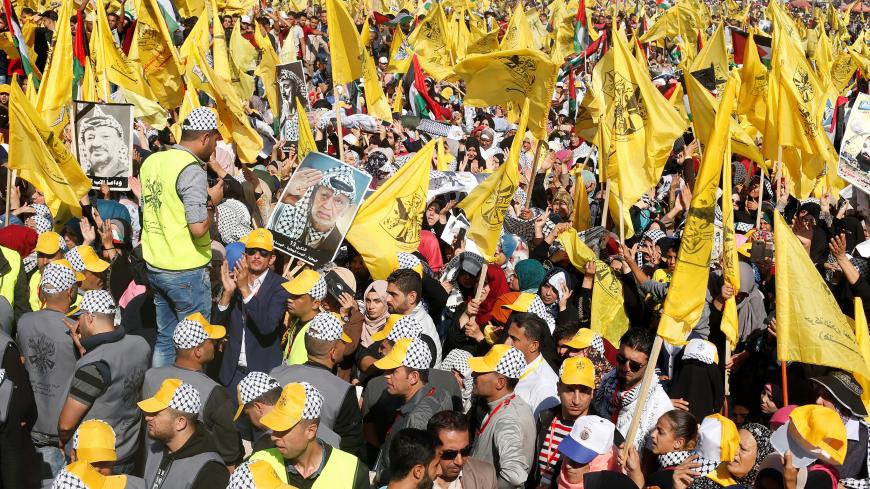 US Vice President Mike Pence arrives in Israel on Dec. 20. Although the original aim of his visit was to pave the way for presentation of an American peace initiative, Palestinian President Mahmoud Abbas has already announced that Pence is not welcome and senior Palestinians would not meet with him as a result of President Donald Trump’s Dec. 6 recognition of Jerusalem as the capital of Israel. The highlight of Pence’s Israel trip will be a visit to the Western Wall, Judaism’s holiest site and a flashpoint of the Israeli-Arab conflict.

A senior White House official briefing Israeli reporters explained that the Trump administration could not envision any scenario in which the wall “would not be part of the State of Israel” in any future peace agreement with the Palestinians. He added that Pence’s visit to the Western Wall, unlike Trump’s May 22 stop, will not be private but an official visit in his role as vice president.

For the Palestinians, the White House comments about the wall and Pence's visit to the site, adjacent to the Al-Aqsa Mosque, are adding fuel to the violent protests that were ignited in the West Bank and Gaza by Trump’s declaration. Abbas announced that the US position on Israeli sovereignty over the Western Wall, located in the predominantly Palestinian eastern part of the city, underscores once again that the Trump administration is not fit to play any role in the peace process. In other words, there’s no point discussing negotiation with Israel, and certainly not with US mediation.

Several hours after he spoke, Abbas’ Fatah movement announced that its leaders had conferred and decided to continue the “day of rage” protests launched in the West Bank following Trump’s proclamation. They intend to escalate the protests during Pence’s visit to the Western Wall on Wednesday night. Senior Fatah official Qadura Fares told Al-Monitor that despite Trump’s pledge that Jerusalem’s final borders would be decided in Israeli-Palestinian negotiations, his official recognition of Jerusalem as Israel’s capital followed by the White House position on the wall clearly mark the city’s future boundaries.

Since the 1993 signing of the Israeli-Palestinian Oslo Accord and throughout years of subsequent negotiations, all parties understood that the Western Wall that Israel captured in the 1967 war would fall under Israeli sovereignty. “The bedrock of our existence,” as Prime Minister Benjamin Netanyahu famously dubbed the Western Wall when he first assumed office in 1996 (following the Western Wall tunnel crisis), has become a “bedrock of division” following Trump’s declaration.

Martin Indyk, the former US ambassador to Israel who led the US team in the Israeli-Palestinian peace talks in 2013 and 2014, affirmed on Twitter that throughout the negotiations, the Palestinians never imagined the wall would not be under Israeli control, whatever the conditions and type of agreement reached. “Not anymore,” he added, attributing the change in the Palestinian position to the unrest spawned by Trump’s declaration.

All the political camps and factions within all the Palestinian Authority (PA) are taking advantage of the Jerusalem declaration to advance their various interests, including rivals Fatah and Hamas. However, of particular interest is the interaction among the camps within Fatah. Both the PA president’s supporters and his opponents regard Trump’s move as the death knell of the peace process, signaling that the time has come for Fatah to change course. Top Fatah officials have started counting the days to Abbas’ departure from office.

Trump’s Jerusalem declaration has destroyed what was left of Abbas’ credibility among his people, as reflected in a poll by the Palestinian Center for Policy and Survey Research. The poll, conducted among a sampling of 1,270 Palestinian adults following the US declaration, indicates that 70% of respondents would like Abbas to step down; 44% think the most effective way to achieve Palestinian statehood is through violent resistance, which Abbas rejected; and about half believe violence is the fitting response to Trump’s announcement.

The movement has already started acting on these public opinion trends. “It is clear that [Abbas] has become a liability for the movement, and we believe he understands this full well,” a top Fatah official told Al-Monitor on condition of anonymity. If he fails to act soon, the battle over his succession will go public, says the source, adding that Fatah is engaged in a do-or-die struggle.

The Fatah point man leading the “day of rage” activities in the West Bank is Mahmoud Al-Aloul, named at the start of 2017 as Abbas’ deputy. The Palestinian president, who for years refused to name a deputy, made the appointment in light of growing political unrest within Fatah and in a bid to block other contenders for the leadership he viewed as more of a threat. It turns out that Al-Aloul has a keen understanding of public sentiment, which no longer believes Trump will present a peace plan ending the Israeli occupation. Following the Jerusalem declaration he said, “Oslo has ended. We are in a state of constant conflict with the occupation. The conflict cannot be stopped. We have adopted a path of civil disobedience.”

Israel’s Coordinator of Government Activities in the Territories, Brig. Gen. Yoav Mordechai, saw these remarks as a call to armed struggle. On his office’s Arabic-language Facebook page, he warned Al-Aloul and “his friends” in Fatah against incitement that could result in an Israeli reaction.

Nonetheless, Israeli threats are unlikely to tone down the rhetoric of the young generation vying for the Fatah leadership. The battle for succession has begun, and in order to stand out and gain the upper hand, all Fatah officials who view themselves as Abbas’ potential heirs will adopt a more militant policy than he did. Trump’s declaration marked the official failure of the conciliatory, diplomatic and moderate approach espoused by Abbas and eschewed by most of the Palestinian public. As the war of succession heats up, so will the tone of the wannabe Fatah leaders. One intriguing potential successor who has so far remained mum is former Fatah senior Mohammed Dahlan. Probably not for long.