Is Abbas the key to Israeli annexation of West Bank lands? 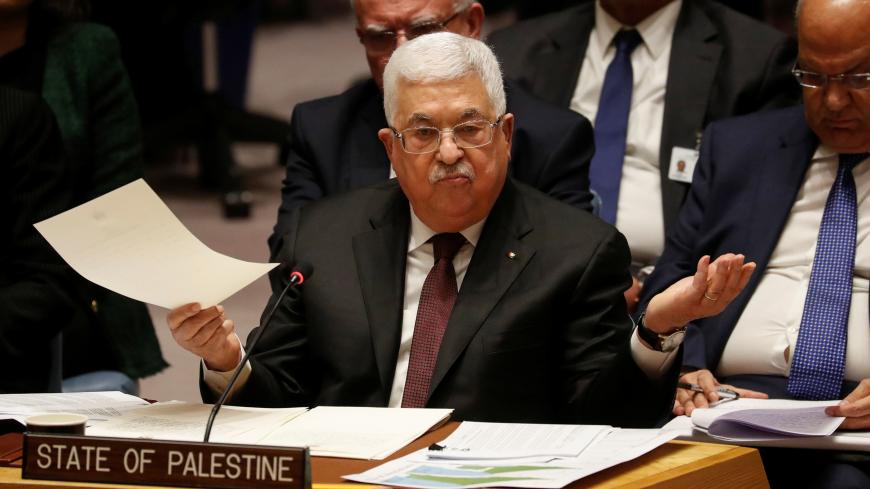 Palestinian President Mahmoud Abbas had expected more widespread, angry protests than eventually took place on the streets of Ramallah, Jenin, Nablus and Hebron following the Jan. 28 unveiling of the US plan for Israeli-Palestinian peace. He was hoping that such demonstrations would boost support for his leadership even as the dream of the Palestinian state he had promised his people faded away.

The plan presented by President Donald Trump represents a personal blow for Abbas. Since being elected president of the Palestinian Authority (PA) in 2005, Abbas has been promising Palestinians that peaceful methods would lead to a state, unlike the sometimes violent tactics advocated by his predecessor, Yasser Arafat. Despite Abbas' efforts, for the past 15 years, he has endured constant blows, with none of his promises to the Palestinians being realized. In fact, peace has never seemed farther from fruition, and the occupation never deeper or more humiliating. From the Palestinians' perspective, the Trump plan legitimizes Israel’s occupation of their territory and legalizes the settlements built on their land. In other words, Abbas’ quest for a peaceful road to an independent state has been a miserable failure.

According to a poll conducted by the Palestinian Center for Policy and Survey, headed by Khalil Shikaki, 64% of Palestinians support a return to armed struggle. The survey of 1,270 respondents in early February also found that most view Abbas’ dismissal of the Trump plan as the correct response, but at the same time also do not believe he will make good on his threats to revoke Palestinian recognition of Israel and halt security coordination with Israeli forces. In short, this means most Palestinians want an aggressive leadership, one that is not all talk, reflecting distrust of their leader at the darkest hour of the Palestinian struggle after the 1993 Oslo peace agreement. The findings reflect a realization that the dream of a Palestinian state is unachievable as long as Abbas remains in power.

Israel is of course monitoring the Palestinian response to the Trump plan with great interest to see how it is affecting the already shaky ground on which Abbas stands. On the one hand, Israeli officials found it encouraging that senior Palestinian officials were unable to inspire people to turn out for mass protests and clashes with Israeli troops with the exception of several localized demonstrations. On the other hand, there is grave concern that Abbas, at the age of 84, is nearing the end of his political road. His potential successors are not yet sharpening their swords, but are closing ranks within their various camps and taking advantage of Palestinian despair over the lack of a diplomatic horizon.

Israel is keen to see Abbas enfeebled, embattled and bruised, with most of the Palestinian street ignoring his calls, but at the same time wants him to carry on. From the Israeli perspective, if a decision is made to annex West Bank territories immediately after March 2 elections, it would be best to do so with Abbas in control in the hope of the move eliciting only a weak response. On the other hand, the weaker Abbas is, the nearer the battle for succession. Each wannabe successor could try to strengthen his position by encouraging sweeping, violent resistance. Any sign of weakness, as Abbas is viewed as exhibiting, would sink a candidate’s prospects.

Three figures in particular regard themselves as viable heirs to Abbas and capable of leading the Palestinians in a different direction with a less conciliatory and ingratiating policy: Mohammed Dahlan, a former Fatah senior; Mahmoud al-Aloul, deputy Fatah chief; and Jibril Rajoub, a senior Fatah official. Majid Faraj, head of Palestinian intelligence, is another possible candidate and probably Israel’s preferred choice. The prospects of Faraj succeeding Abbas are not, however, good, in part because he keeps a low profile due to his job, forgoing interviews and photos. For many Palestinians on the West Bank, he is an unknown figure, lacking the power base that every contender will need when the battle of succession gets underway.

One thing appears to be certain: Whoever replaces Abbas will strive for a determined, militant line vis-à-vis Israel and try to foment far more sweeping, determined and violent protests than thus far witnessed. Will the Palestinian street heed calls for popular resistance, or do people feel a sense of despair and distrust toward Abbas’ former protégés as well, including his bitter enemy Dahlan? It probably depends on what Israel does.

Unilateral Israeli annexation, as per the go-ahead granted by the Trump plan, will likely generate a wave of protests relatively easy to contain with Abbas in power. He will rant and rail, try to mobilize international support against Israel and even appeal to the International Criminal Court at The Hague, but Israel will stay the course and do whatever it wants. Unilateral annexation under a new Palestinian leader would alter that scenario, as the successor seeks to prove he is not as docile as Abbas.

Israel is all too familiar with such a scenario. Prime Minister Benjamin Netanyahu, Defense Minister Naftali Bennett and even former Defense Minister Avigdor Liberman, all of whom are dismissive of Abbas and speak of him with disdain, would nonetheless prefer that Abbas remain in charge of the PA in order to maintain the status quo of a faltering entity too weak to resist.

The Israelis must, however, avoid chaos within the PA if they want its next leader to be able to withstand pressure for a return to armed struggle. Herein lies a paradox. Any Israeli diplomatic or military move potentially perceived by the Palestinian public as undermining Palestinian sovereignty — even if it doesn't entail immediate unilateral annexation of territory — could intensify protests and radicalize the positions of Abbas' heirs.

Even with Abbas having initially declared his intention to halt security coordination with Israeli forces, Israel is offering him closer military coordination in the arena of domestic Palestinian affairs in order to preserve his standing and warn rivals against taking actions with the hope of his departure. To that end, Israel is also offering an economic “gift”: It will issue hundreds of additional permits to allow West Bank Palestinians to work in Israel, perhaps illustrating that the current tensions do not impact business as usual.

Israeli and Palestinian officials are playing a dual game. In public, including in the international arena, they are waging a highly charged, uncompromising diplomatic war. At the same time, the two sides are engaged in measures that stand to strengthen Abbas or at least limit the damage to his standing.