With Palestinian frustration increasing over the hardships of the Israeli occupation, Israeli security experts keep warning of a violent breakout, and Prime Minister Benjamin Netanyahu keeps ignoring the warnings. 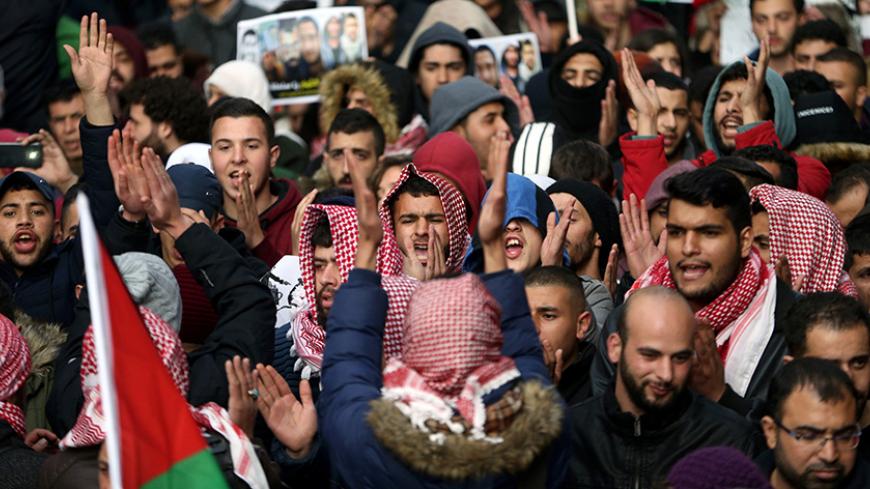 Palestinians take part in a protest against the Palestinian Authority in the West Bank city of Ramallah, March 13, 2017. - REUTERS/Mohamad Torokman

Ahead of his second meeting March 16 with US President Donald Trump’s envoy Jason Greenblatt, Prime Minister Benjamin Netanyahu posted a video clip on his Facebook page. “We’re in a process of dialogue with the White House,” he said. And what is this dialogue about? “About an agreed policy on construction in the settlements.” Indeed, Netanyahu did not forget his promise to the residents of the illegally built West Bank outpost of Amona that he would build a new settlement for them after they were evicted in January under a court order.

Not even three months have elapsed since the UN Security Council voted unanimously on Dec. 23 against the settlement and outpost enterprise in Israeli-occupied territories. Netanyahu thumbed his nose at Resolution 2334, laughing at it all the way to Singapore, Sydney, Moscow and Beijing (which he visited in recent weeks), and even to the White House.

But the heads of Israel’s intelligence services, as well as Israeli Middle East scholars, aren’t amused. Shin Bet security agency director Nadav Argaman reported on March 20 to the Knesset’s Foreign Affairs and Defense Committee that the activity of the Palestinian terrorist organizations indicates continued escalation of the threat level from the West Bank, reflecting the ongoing destabilization momentum in this region. He noted that some young activists still view terrorism as a legitimate tool to generate change in this arena. Argaman’s assessment is compatible with the one presented last November by the head of military intelligence, Maj. Gen. Herzl Halevi. He, too, warned against instability in the West Bank, attributing it to the weakened standing of Palestinian President Mahmoud Abbas, the battles for succession in the Palestinian leadership and exploitation of the unrest by Hamas. At the beginning of March, Halevi warned against a conflagration in the West bank unless residents see some sort of diplomatic horizon soon. That was shortly after the publication on Feb. 28 of a report by the State Comptroller General on the 2014 Gaza war, accusing Israel’s political leadership of ignoring the security implications of the Gaza blockade, namely the despair of the besieged Gaza Strip residents.

A wide-ranging public opinion poll conducted by the Palestinian Center for Policy and Survey Research, headed by Khalil Shikaki, found that most residents of the territories prefer the two-state option to a one-state one. But seven out of 10 Palestinians questioned in the poll — conducted ahead of the upcoming 50th anniversary of the Israeli occupation — believe that a Palestinian state will not be established within the coming five years. But what should be most worrying for a responsible Israeli government is expressed in a finding that every second Palestinian supports a dismantling of the Palestinian Authority (PA) and renewal of the armed struggle against Israel. In addition, a large majority (77%) supports the severing of security coordination with Israel.

On March 12, a stormy protest was held against the PA at the magistrate’s courthouse in the West Bank town of al-Bireh over the indictments filed against six young Palestinians. The indictments against the six Palestinians include illegal possession of firearms and endangerment of human lives. Only one of the six indicted was in the courthouse. His friend, Bassel al-Araj, had been killed by Israeli soldiers several days before. The other four were also absent from the court. They were actually caught by Israeli security forces during the same raid where Araj was killed; a raid conducted by the Israelis in the area of al-Bireh, which is located in Area A of the West Bank (supposedly under full PA control). The Israelis forgot to update the PA about the detention of the four; which explains their absence from the trial.

The protesters were furious about the fact that the Palestinian security apparatus was chasing the same people chased by the Israelis. To the demonstrators and to the Palestinian public at large, this illustrated clearly the depths of PA collaboration with the Israeli occupying forces.

During the protests, calls were heard in support of Hamas and against the 1993 Oslo Accord between Israel and the Palestinians, demanding the PA abrogate it. Indeed, Hamas and Palestinian Islamic Jihad took advantage of the situation to goad the PA, issuing a statement saying that what happened to Araj and his friends was a reminder of the ugliness of the security coordination between the PA and Israel. In an attempt to reassure the public, the PA rushed to announce that a commission of inquiry would be established to examine the violent conduct of the Palestinian security forces against the demonstrators protesting the trial. Al-Monitor has learned that in a conversation he had recently with a delegation of Israeli peace activists, the head of Palestinian intelligence, Majid Faraj, said he was losing sleep not only over fear that the PA security forces would succumb to public pressure and stop coming to work, but that they would take their weapons and go “elsewhere.” In other words, to the Hamas and Islamic Jihad recruitment centers.

In the 1990s, former Fatah senior member Mohammed Dahlan, known at the time as “the sheriff of Gaza” (he served as the head of the Palestinian Preventive Security Force in the Gaza Strip), claimed in a conversation with Israeli acquaintances that oftentimes, an order to arrest a Palestinian suspected of terrorism against Israel meant ordering the policeman to detain a relative, a neighbor or a classmate. When such actions are taken while a diplomatic process is underway, Dahlan argued, it is accepted as an essential service to the national Palestinian interest. But in the absence of such a process, that very same order is perceived as a service to the occupation. At the time, Dahlan implored that Israel would not push the Palestinian policemen into such an impossible corner.

In a conversation this week with Al-Monitor, Middle East scholar Shaul Mishal defined the Palestinian security forces as “a ticking time bomb.” Mishal, who heads the Department of Middle East Studies at the Interdisciplinary Center in Herzliya, warns that the young generation, with its negative attitude toward the PA, will demonize the security forces and label them “collaborators.” This danger will grow as the power struggles over Abbas’ succession intensify and in the absence of an accepted and agreed-upon successor. Mishal pointed to the danger that a violent power struggle within the Fatah movement’s leadership, with the involvement of Hamas, would push the security forces to change direction and help in the terror activity and popular uprising against Israel and the settlers. “God forbid, if the collapse of the diplomatic process intersects with the battle for succession,” the senior scholar said in summing up.

Israeli politicians — and Netanyahu at their head — are familiar with the state of affairs in the Palestinian capital of Ramallah. In a worst-case scenario, Netanyahu is troubled by the police probes against him and by his poll ratings and is not available to deal with matters he regards as minor. In the disastrous scenario — and one senior Foreign Ministry official raised this possibility with Al-Monitor this week — the collapse of the PA in a wave of violence will distance the danger of a “peace process.” According to the senior official who spoke on condition of anonymity, most importantly, a violent intifada will defuse the explosive issue of a settlement freeze that is threatening to destroy Netanyahu’s ruling coalition and to boost his rival, HaBayit HaYehudi Chairman Naftali Bennett. And to hell with the security consequences … and human life.