US-Palestinian rift nothing for Israel to celebrate

Israel shouldn’t rejoice over rift between the United States and the Palestinians as previous US administrations helped repeatedly to ease tensions and end violent clashes. 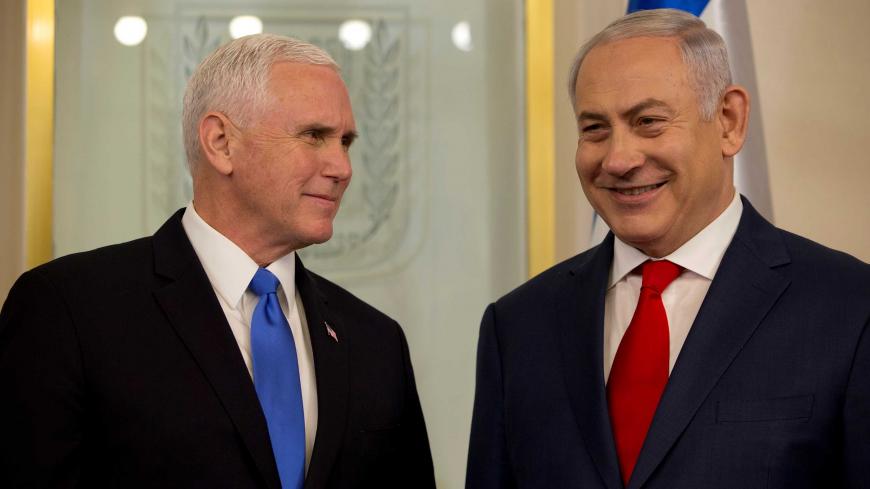 US Vice President Mike Pence stands next to Israeli Prime Minister Benjamin Netanyahu during a meeting at the prime minister's office in Jerusalem, Jan. 22, 2018. - REUTERS/Ariel Schalit

Speaking at the emergency meeting convened Dec. 13 in Istanbul by the Organization of Islamic Cooperation, Palestinian President Mahmoud Abbas declared that the Palestinians will no longer accept the United States as a mediator in a peace process with Israel.

Israel’s right-wing settlement establishment was evidently thrilled when the Palestinian leadership took the conductor’s baton away from US President Donald Trump and dismissed him from the traditional role of American leaders as orchestrators of Israeli-Palestinian mediation. For them, the Palestinian decision was just as satisfying as Trump’s Dec. 6 recognition of Jerusalem as the capital of Israel. Jewish lawmakers displayed their pleasure in an enthusiastic Knesset reception for Vice President Mike Pence on his Jan. 21-23 visit to Israel, reflecting their closeness with the US administration.

The Palestinians expressed their ire by boycotting his visit and denying the fervent evangelical Christian access to the Church of the Nativity in Bethlehem. According to the rules of the zero-sum game that has taken Israel by storm under the leadership of Prime Minister Benjamin Netanyahu, a crisis in relations between Palestinians and Americans is a boon for Israeli interests. The truth is, there’s no greater fallacy.

The rift between the Palestinian leadership and the US administration is deeper than it appeared initially after Trump’s Jerusalem declaration. Its roots lie in Trump’s pledge soon after taking office to bring about the “ultimate deal” between Israelis and Palestinians, as portrayed in a document by veteran Palestinian negotiator Saeb Erekat. The “deal,” as described by the secretary-general of the PLO’s Executive Committee, reflects a total lack of understanding by the Trump administration of the core issues underlying the Israeli-Palestinian conflict. For example, it demands that the Palestinians hand Israel 10% of the West Bank, nearly five times as much land as President Bill Clinton proposed when he tried to mediate between the sides in the year 2000. In addition, according to Erekat’s report, Israel would continue to hold overall security control over a future Palestinian state and along its borders. Israel’s withdrawal from the West Bank, which it has occupied for 50 years, would be gradual, with no set timetable, in accordance with Palestinian security performance.

Erekat wrote that the plan “will entrench the status quo and form an eternal autonomy," arguing that it will offer American legitimacy to settlements. Therefore, he added, Palestinians have no reason to look forward to the American plan. Senior White House officials told Israeli journalist Barak Ravid, who broke the story on Channel 10 News, that the details as described by Erekat were incorrect. “We remain hard at work on the real draft plan,” his source said, promising the plan will "benefit both sides."

Three days after this calming message by an anonymous source, Pence announced that the United States would move its embassy from Tel Aviv to Jerusalem by the end of 2019. Pence’s speech from the Knesset podium was otherwise devoid of any prospects for the Israeli-Palestinian peace process. What can one expect from a visitor to the legislature, most members of whom have stopped paying even lip service to peace? The settlement-driven right wing that controls Israel has traded the biblical edict “seek peace and pursue it” with the tactic of “talk peace and avoid it.” Netanyahu lashed out at Abbas, saying, “Whoever is not ready to talk with the Americans about peace does not want peace.” Exactly what kind of peace is the Netanyahu government willing to discuss with the Americans (or with anyone else, for that matter)? When was the last time the government discussed (not to mention voted on) the establishment of a Palestinian state?

It’s hard to assess the implications of Trump’s removal as Middle East peace mediator. All US presidents who tried their hand at Israeli-Palestinian mediation since the 1993 signing of the Israeli-Palestinian Oslo Accord failed to put an end to Israel’s occupation and the conflict. The Oslo agreement was reached in direct talks between Israel and the PLO, with the modest help of the Norwegian government. Former Prime Minister Ehud Olmert achieved far-reaching agreements with Abbas in 2008 without the help of a third party. Clinton’s efforts to mediate between Prime Minister Ehud Barak and PLO chief Yasser Arafat in 2000 generated anxiety on the right, but did not advance a diplomatic agreement between the sides.

On the other hand, the Americans are in a league of their own when it comes to mediation on security issues. Ask Netanyahu. Back in his first months in office in 1996, when his order to open up the Western Wall tunnels resulted in an outbreak of violence that took the lives of 17 Israeli soldiers and some 100 Palestinians, Netanyahu called on the White House to douse the flames. US President George W. Bush sent Secretary of State Condoleezza Rice to stem the escalation. When violence erupted in the flashpoint Jerusalem site of the Temple Mount in September 2015, Netanyahu sought the help of the Obama administration. President Barack Obama’s Secretary of State John Kerry also played an important role in the contacts that ended the 2014 war between Israel and Hamas in the Gaza Strip.

There’s no reason to uncork the champagne in Jerusalem that the communication channels between Ramallah and Washington are plugged up. Those same channels of communication saved numerous Israeli lives over the years. A state that controls the lives of millions of people by brute force cannot afford to give up the services of a reliable broker. Israelis will be the biggest losers if American orchestration over the peace process is lost. The conductor’s podium will not remain empty for long. There are elements already casting their eyes toward the vacuum left by the Trump-Pence administration. The tunes they come up with will not be music to Israeli ears.