Iranian media opine that Ali Abdullah Saleh’s reported talks with Saudi Arabia and the United Arab Emirates and consequently the breaking of his alliance with the Houthis led to his death. 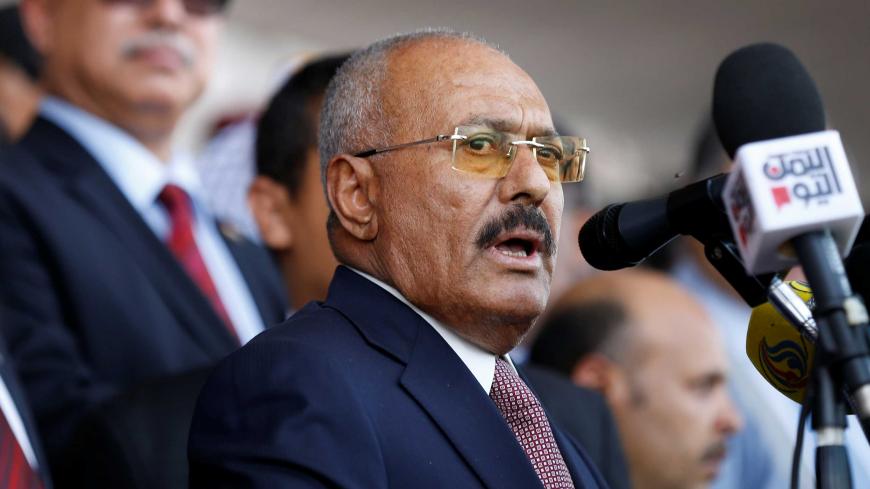 The death of former Yemeni President Ali Abdullah Saleh has received extensive coverage in Iran, with media outlets and newspapers describing his fate as the result of his “betrayal” of the Houthis.

With the headline, “The End of the Complicated Arab Politician,” the government-run newspaper Iran wrote Dec. 5, “In 2013, in the midst of Yemen's internal disputes between Ansar Allah [Houthis] and [Abed Rabbo] Mansour Hadi’s government, which led to Hadi’s escape to Saudi Arabia, Abdullah Saleh returned to the country and formed an alliance with national unity [government] forces and stood against Hadi and Saudi Arabia.”

Iran daily added, “Seemingly, following behind-the-curtain talks of Abdullah Saleh with Saudi Arabia and the [United Arab Emirates], this alliance had reached an end unilaterally and secretly a few months ago. But with serious conflicts between forces loyal to Abdullah Saleh and those of the national unity [government] in Sanaa [on Nov. 29], the end of their alliance and beginning of bilateral hostility went public.”

The report continued, “In the wake of the killing of Saleh, the people of Yemen expressed their satisfaction over his death and the thwarting of the conspiracy of the aggressors to cause internal sedition in the country.”

Moreover, Kayhan newspaper — known to be the mouthpiece of Iranian hard-liners — argued Dec. 5, “In recent days, Ali Abdullah Saleh's forces had triggered a new sedition in Yemen that led to the death of 40 people — a sedition that made the Saudis strangely excited.”

“The conflicts between Saleh and Ansar Allah loyalists were called a ‘Welcomed Revolution’ by Saudi Arabia, and it was announced to the Saudi media that they are no longer allowed to call him ‘the deposed Yemeni president.’ This action on the part of Saleh was interpreted by the Yemeni revolutionaries as a ‘betrayal,’ because in the past three years, Saleh had declared that he would stay alongside the revolutionary forces, but eventually, this betrayal led to his death,” reported Kayhan.

Taking the same stance as Kayhan — a rare occurrence — Reformist Shargh newspaper covered Saleh’s death with the headline, “The Bloody Destiny of the Promise Breaker.” “With the death of Saleh, the situation in Yemen will also undergo a major transformation. Prior to Saleh's death, the tribes who were pro-Saleh tried to keep their control of their area against the Houthis. On the other hand, Mansour Hadi has also ordered his loyal forces to move toward the capital. It is not clear what would be the situation after this new development. Additionally, it has been said that the Houthis will take control of Sanaa by making the forces loyal to Saleh retreat,” argued Shargh on Dec. 5.

Referring to the death of Saleh, the Reformist daily reported, “It seems that [pro-Saleh tribes] did not come to his aid in the final war with the Houthis, and this eventually resulted in his death. Perhaps his approach to the Saudis can be considered as one of the reasons behind the dilemma of the former supporters of Saleh and [them] distancing themselves from him. … It is likely that his sons or nephews will replace him and once again make the Saleh loyalists consolidated and united.”

Reformist Etemad daily wrote that, unlike the assumption of Saudi Arabia, the death of Saleh won’t provide any opportunity for them to take over Yemen. “Before his death, Ali Abdullah Saleh had become almost a useless person for all parties. To Saudi Arabia, he was not reliable, and after breaking his alliance with Ansar Allah, he was not considered reliable for Houthi leaders either. Moreover, his record of having power for nearly four decades in Sanaa made it unlikely that both himself and his relatives and tribes have any popularity among Yemeni citizens,” argued Etemad on Dec. 5.

The Reformist newspaper added, “Today, the Yemeni people are pleased with the killing of a dictator like Ali Abdullah Saleh, and they are prepared to resist any attack by the coalition under the leadership of Saudi Arabia. However, with the death of Ali Abdullah Saleh, the Saudis may have imagined that they have a good opportunity for gaining final domination over the situation in Yemen, but ultimately they will not benefit from these developments.”