Iran willing to normalize ties with KRG, but not without change

Having helped bring the Iraqi Kurdish leadership to its knees, Tehran has increased its sway over the future of Iraqi Kurdistan. 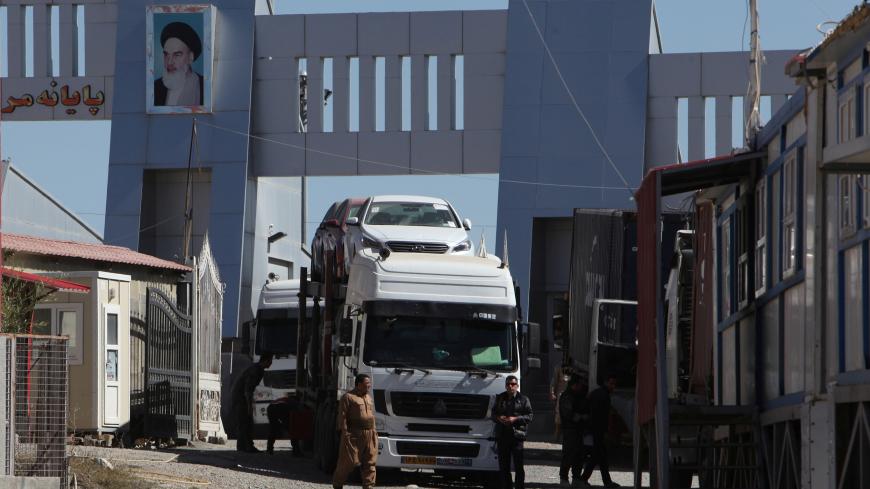 A view of the Haj Omran border crossing between Iran and Iraqi Kurdistan, Oct. 14, 2017. - REUTERS/Azad Lashkari

Iran appears to be preparing to normalize its relations with Iraqi Kurdistan after two tumultuous months in which it helped Baghdad bring the Kurds to their knees following their ill-fated Sept. 25 independence referendum. Iran has expanded its influence in Iraq by delivering on its promises to Baghdad, and in particular assisting the Popular Mobilization Units in retaking disputed territories from Kurdish forces, just as Iran promised before the referendum.

“The September referendum on Kurdish independence has had disastrous consequences for the Kurds and for the cooperation that had emerged between Baghdad and Erbil during the Mosul campaign,” former US Ambassador to Iraq Stuart Jones told a Senate committee Dec. 14. “Following the referendum, [Iraqi Prime Minister Haider al-Abadi] did what was needed. Now he is in a position to work toward reconciliation.”

These and other comments by both Iranian and US officials confirm one important point about the situation in northern Iraq during the past few months, or perhaps even years: Iran and the United States were unified in their opposition to the referendum, and now appear again to agree — this time on pushing Abadi to reconcile with the Kurds. Iran seems to be doing so by resuming trade with the Kurdistan Region of Iraq after closing its land border crossings, a vital lifeline for the Kurdistan economy.

"We have decided to reopen these two [land border] crossings in one or two days,” Iranian Interior Minister Abdolreza Rahmani Fazli told reporters Dec. 17. Iran had previously opened one of its border crossings into Iraqi Kurdistan on Oct. 25. The day after Fazli’s announcement, Foreign Ministry spokesman Bahram Qassemi announced that all border crossings had been reopened, without offering further details. Kurdish news agencies had reported that the crossings had been closed on Oct. 15.

The Iranian statements came after Kurdistan Region Prime Minister Nechirvan Barzani reportedly asked Tehran to reopen its border crossings and normalize relations with the Kurdistan Regional Government (KRG). Iran's hard-line Kayhan Daily quoted an anonymous Kurdish official as saying that Barzani had told two Iranian delegations over the last month that he hoped Iran and the KRG would normalize relations and open a new chapter.

​Since the Iraqi government’s move to seize control of Kirkuk on Oct. 16, Barzani has sought to make amends with neighboring countries, particularly Iran. Barzani said Nov. 21 that the KRG would respect the Iraqi federal court's ruling that the Kurdistan referendum was unconstitutional. This helped convince Tehran that the Kurds were now repentant about having held the vote. At the same press conference, Barzani said, “Iran is our neighbor. The Kurdistan Region shares a long border with Iran and we obviously want to have a good relationship with Iran.”

Prior to the referendum, Quds Force commander Qasem Soleimani warned the Iraqi Kurdish leadership of severe repercussions if the referendum were to take place, as reported by Al-Monitor. Without apparent interference from the United States, Soleimani delivered on those repercussions. Iran did indeed impose an economic blockade on the Kurdistan Region and assisted Iraqi security forces, including the Popular Mobilization Units, in pushing the Kurds out of disputed territories. A top Kurdish commander in Kirkuk, Wasta Rasul, told Kurdsat News on Dec. 15 how Iran pushed the Kurds to abandon Kirkuk without a fight. “I received a phone call Oct. 14 from the Iranians, saying they wanted to meet me,” he said. “I sat down with them. There were nine people in the delegation and only one was Iraqi. … I turned to my colleague and smiled and said, ‘We are negotiating with Iran, not Iraq.’”

The KRG’s loss of Kirkuk was not just a territorial loss. The KRG also lost two oilfields near Kirkuk that it had claimed in the summer of 2014, when the Islamic State swooped across the north of Iraq and the peshmerga seized areas abandoned by the Iraqi army and police.

With the loss of revenue from the Kirkuk oilfields, the KRG has been brought to its knees. It has no option but to negotiate with its neighbors — including Iran. The KRG is currently unable to pay the salaries of employees of its bloated civil service, and it only provides around three hours of electricity a day to residents. On Dec. 18, protesters took to the streets to demand the resignation of the Kurdish political leadership. Demonstrators also set fire to the offices of the main political parties in the town of Piramagrun in Sulaimaniyah province, shouting, “Thieves!” Riot police intervened and used water cannons and tear gas to disperse protesters.

Despite the apparent progress in terms of the reopening of the border crossings, sources close to the Iranians told Al-Monitor that Iran is not yet ready to fully normalize its relations with Iraqi Kurds — unless the officials who advocated for the referendum are off the political stage. Given Iran’s increasing influence in Iraq, it appears that the Kurds may have no option but to concede on this point, too.