The Egyptian parliament passed a law guaranteeing women’s rights to inheritance, which was widely welcomed, especially by women in Upper Egypt. 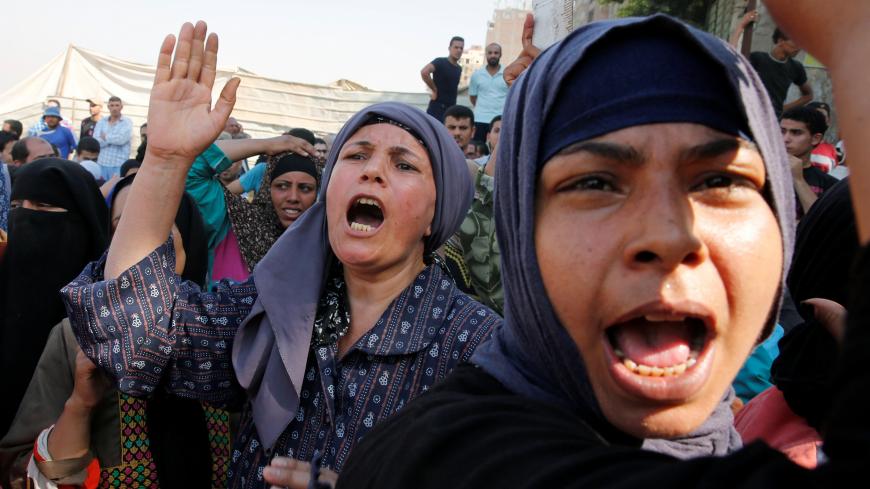 CAIRO — The Egyptian parliament passed a new Inheritance law Dec. 5 giving women their legitimate right to inheritance after the majority had been deprived of it, especially in Upper Egypt where cultural norms and traditions are ingrained with sexism.

Article 49 of the new law states that anyone who deliberately denies the heir, be it a man or a woman, their legal share of the inheritance or confiscates a document confirming this share shall be jailed for six months at least and be subject to a fine ranging between 20,000 Egyptian pounds ($1,122) at least and 100,000 pounds at most. In case of recidivism, the prison sentence shall be no less than one year.

Parliament approved the new law after the Cabinet, the National Council for Women (NCW) and civil associations submitted several draft laws in January 2016, December 2016 and September 2017, respectively, to amend the 1943 Inheritance law. Other bills were submitted by members of parliament also, including by parliamentarian Nadia Henry.

NCW Director Maya Morsi told Al-Monitor, “We reached 1.2 million women in rural and underprivileged areas in our ‘Tareq al-Abwab’ ['door-knocking'] campaign to familiarize women deprived of inheritance of their rights.”

The campaign aims at reaching out to women in villages and remote areas in Egypt's governorates, especially in Upper Egypt, to raise awareness of their rights and help them improve their economic and social conditions.

Morsi added, “We support any legislation guaranteeing women in Egypt their legitimate rights, thus empowering them economically by giving them a source of income that would improve their living standards.”

Muslim and Christian scholars approved of the new law. Ahmed Karima, a Sharia teacher at Al-Azhar University, told Al-Monitor, “The law complies with the principles of Sharia and confronts beliefs and norms that deprive women of their legitimate right to their parents’ or relatives’ inheritance — an act generally classified as apostasy. God’s orders mentioned expressly in Surat an-Nisa in the inheritance verses [that the Islamic law] should be obeyed.”

The pastor of St. Mark's Catholic Church in Minya, Andraos Farage, told Al-Monitor, “Christianity gave women the right to equal inheritance with men. But the church receives complaints from women because of their deprivation of the inheritance and their relatives’ greed under the pretext of norms and traditions, especially in Upper Egypt governorates.”

Farage said, “In many cases, despite the church’s mediation, women give up their right to inheritance to protect their family ties and avoid clashes.”

He added, “The church intervenes when women fail to get their rights through the judiciary. Most solutions — such as reconciliation sessions — are moderate to alleviate the injustice but do not give women their full rights.”

Despite the Christian and Muslim texts stipulating women’s right to inheritance, there are plenty of complaints and cases filed by women who have waited years without a ruling.

Mona Soliman, a woman in her 50s who filed a complaint with the NCW, told Al-Monitor, “I was deprived of my father’s inheritance, which my brothers claimed as their own. They said they wanted to prevent my husband’s family from taking a piece of the land.”

She added, “Five years on, no ruling has been issued to give me back my right after my brothers said before the court in the Minya governorate that the land ownership was transferred to them on my father’s death bed and that he told them not to give me ownership.”

Family members who want to deprive women of their right to the inheritance often forge title deeds before the judiciary. Khadija Hussein, a woman in her 40s from Bani Suef, told Al-Monitor, “After my husband died, his brothers deprived me of the property we live in under the pretext that he did not have any male heirs. They manipulated the title deeds to show the court that the property was theirs, and I could not prove they had forged the papers.”

Egyptian President Abdel Fattah al-Sisi had dubbed 2017 “The Year of Women,” attacking cultural norms that deprive women of their inheritance during the World Youth Forum on Nov. 8. He said, "We must change the norms and put an integrated program to redraw the real image of women and promote their status.”

Issam Shaaban, the media officer and spokesman for the Egyptian Feminist Union, told Al-Monitor, “Any action to face women’s deprivation of their inheritance must be coupled with social and legal awareness to qualify women to attain their right and not be afraid of voicing their demands.”

He noted, “Volunteers from rights’ centers should back women to file cases before the judiciary, especially since most women are not aware of their rights or do not have the tools to take action to get them.”

Shaaban added, “The government must provide clear mechanisms that unfairly treated women can rely on. The legislation would then become a real tool rather than a judicial text to obtain rights. Many women have spent years in court hallways in vain.”

Amal Abdul Hadi, an activist at the New Woman Foundation, told Al-Monitor, “The law alone cannot defy norms and beliefs because women then would fear asking for their rights and would settle.”

She added, “The norms have been placed above religious principles for decades.”

by Murielle KASPRZAK and Joseph SCHMID | AFP | May 26, 2022
END_OF_DOCUMENT_TOKEN_TO_BE_REPLACED