Bahrain could become the first Gulf Cooperation Council member to establish official diplomatic and trade relations with Israel, though this may largely depend on the GCC states' response to the Jerusalem crisis. 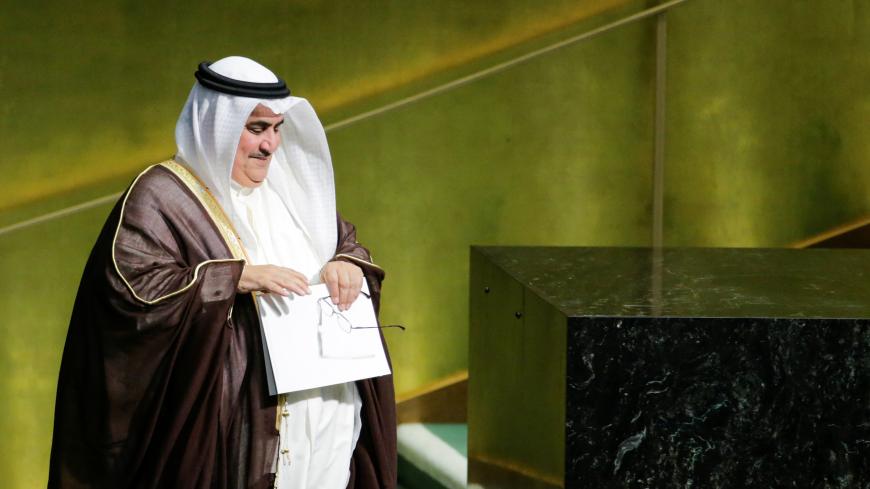 Bahrain and Israel’s shared threat perception of Iran’s growing regional influence has driven Manama’s quiet outreach to the Jewish state over the past year. However, the rage from populations across the greater Arab and Muslim world due to US President Donald Trump’s decision to recognize Jerusalem as the Israeli capital has hindered the prospects of formalized Bahraini-Israeli diplomatic relations.

Like the other five Gulf Cooperation Council (GCC) members, Bahrain, whose leadership frequently invokes the Palestinian cause, has never held formal diplomatic relations with Israel. While Bahrain, unlike Qatar and Oman, has never permitted Israel to open a trade office in their country, Manama’s unofficial contacts with the Jewish state date back to the mid-1990s.

Earlier this year, Bahraini-Israeli ties reached a watershed when two American rabbis — Marvin Hier and Abraham Cooper — spoke during an event at the Simon Wiesenthal Center in California, where they relayed the king of Bahrain’s opposition to the Arab boycott of Israel, as well as his call for Bahraini and Israeli citizens to have the right to travel freely between the two countries. Prince Nasser bin Hamad Al Khalifa was in attendance, leading pundits to speculate about Bahrain's soon becoming the first GCC member to establish official diplomatic and trade relations with Israel.

On Dec. 9, three days after Trump announced his recognition of Jerusalem as the capital of Israel, This is Bahrain, a 24-member Bahraini interfaith delegation, arrived in Israel to discuss normalizing Bahraini-Israeli relations. Bahraini political and religious figures — albeit none from the country’s small Jewish community — comprised the delegation, which sought to showcase the Arab Persian Gulf country’s commitments to religious tolerance and pluralism.

Indeed, the Bahraini government maintains a positive relationship with the country’s small Jewish community, tolerating the GCC’s only synagogue. Until 2013, Manama’s ambassador to Washington, Houda Ezra Ebrahim Nonoo, served as the first Jewish senior diplomat representing an Arab government. In recent years, officials in Manama have honored Hanukkah with ceremonies despite criticism from Hamas officials.

Trump’s Jerusalem decision, however, has severely undermined the delegation’s efforts in Israel. Palestinian guards at Al-Aqsa Mosque expelled This is Bahrain from the holy site; later, protesters in the Gaza Strip thwarted the delegation from entering the besieged coastal enclave. The Palestinian National and Islamic Forces criticized This is Bahrain as “shameless,” saying, “There is no place for people seeking to normalize relations with Israel in Gaza or in any other part of Palestine.” In addition, the Palestinian Ministry of Education reportedly decided against meeting with This is Bahrain or receiving any of the delegation’s members in the occupied territories.

Bahrain’s state-owned media has attempted to distance itself from the delegation, maintaining that This is Bahrain does not represent official government policy. The delegation’s trip to Israel sparked controversy with the Bahraini public, underscored by the country’s social media landscape. The US Embassy in Manama went as far as to issue a warning to US citizens that Trump’s Jerusalem recognition threatened to “spark protests, some of which have the potential to become violent” in Bahrain. In response to the crisis, officials in Manama condemned Trump’s move, declaring that it "threatens the peace process in the Middle East."

Amid this backdrop of dilemmas and conflicting interests, a major question is whether Bahrain and Israel will establish official diplomatic ties in 2018.

In the next year, the future of Bahrain’s relationship with Israel will be heavily influenced by other GCC states’ response to the Jerusalem crisis. Given Bahrain’s increased dependence on Saudi Arabia and the United Arab Emirates for internal security and financial support since the 2011 Arab Spring, Bahrain’s recent outreach to Israel likely received the Saudi leadership’s approval.

Moreover, there is good reason to speculate that Riyadh directed Manama to take a lead in the Arab Persian Gulf states’ quiet yet significant overtures to Tel Aviv, as Bahrain often serves as the first GCC state to take action on behalf of the council, exemplified by Bahrain's severing diplomatic and economic relations with Qatar before other Arab states followed suit just over six months ago.

Although it is unclear how Bahrain’s leadership will assess the risks and potential benefits of reaching out to Israel, odds are good that other GCC capitals will look at Manama’s engagement with Tel Aviv from the viewpoint that pushing back against Iran is a regional priority shared by Manama and Tel Aviv. Had the Trump administration sought to bring Bahrain and Israel closer to firm up the capacity of America’s abilities to collectively counter Tehran, the US president’s dangerous Jerusalem decision undermined any such efforts to promote the formalization of bilateral ties.

Yet even if the current climate throughout the Arab world gives Manama reason to avoid any appearance of being too open to improved ties with Tel Aviv, Bahrain and Israel will more often than not likely wind up in the same boat geopolitically because of Bahrain's and the Jewish state’s regional challenges in the aftermath of the Islamic State’s defeat in Iraq and Syria, the ongoing Qatar crisis and the further strengthening of Tehran’s clout in the Middle East.