Russia and Turkey have attained an "unprecedented" level of cooperation in many areas, some observers say, though the Kurds in Syria may remain a sticking point. 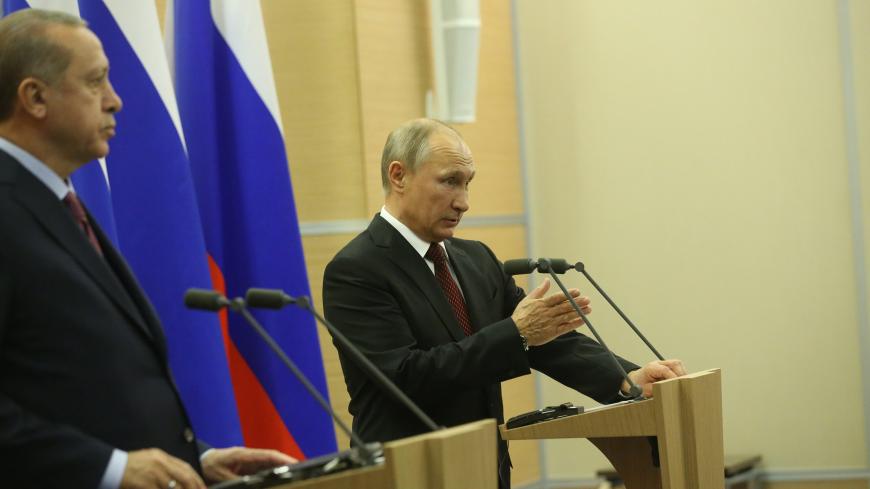 Turkish President Recep Tayyip Erdogan and his Russian counterpart, Vladimir Putin, have seen a lot of each other this year. And when they're not meeting, they seem to be constantly talking with each other on the phone — so often that Russian journalists joke Putin speaks more frequently with Erdogan than with Russia's closest ally, President Alexander Lukashenko of Belarus.

The most recent get-together came Nov. 13 in the Black Sea resort city of Sochi in Russia. It was their fifth meeting this year.

The men have a lot to talk about — mostly related to Syria. But during the joint press conference afterward, they talked mainly about trade and lifting the remaining sanctions Russia imposed after Turkey shot down a Russian military jet in November 2015. One of the sanctions still in place is visa restrictions. Kremlin spokesperson Dmitry Peskov said after the meeting that the issue had been raised, but he was vague: "These, let’s say, concerns of the Turkish side are taken into account, [and] work on them continues."

Before he departed for Sochi, Erdogan said he would discuss the Syria situation with his Russian colleague, paying special attention to the Syrian Kurds issue and a planned Moscow-backed Syrian congress.

Russia had been planning to hold the Syrian Congress on National Dialogue on Nov. 18 in Sochi. Moscow had invited 33 Syrian groups and political parties, including Kurds and other rebel groups. However, Russia postponed the congress after Turkey balked at the Kurds being invited, particularly the People’s Protection Units (YPG) and the Democratic Union Party (PYD), which Ankara considers extensions of the outlawed Kurdistan Workers Party (PKK), Turkish newspaper Hurriyet Daily News reported. "It's an imposition. We have immediately conveyed our reaction. It’s unacceptable," said Turkish presidential spokesperson Ibrahim Kalin. Some members of the Syrian opposition also were against the congress, saying Russia is working on behalf of the regime.

However, Russian Deputy Foreign Minister Gennady Gatilov announced Nov. 14 that the congress has been rescheduled for early December. It wasn't clear if Turkey or the opposition members who criticized the meeting would attend. Turkish Foreign Minister Mevlut Cavusoglu, who was also in Sochi, had said just the day before that, though Turkey doesn't oppose such a meeting, "No terrorist groups should be included in the congress."

During the Sochi meeting, Turkey’s president also called on Russia and the United States to move their troops out of Syria and said he was "having trouble” understanding Putin's recent agreement with US President Donald Trump on Syria. Erdogan said that since Russia and the United States both agree a military solution won't work, they should pull their troops out of Syria and work harder on a political solution. Erdogan didn't mention Turkey’s own military presence in Syria.

As both Putin and Erdogan spoke more about bilateral relations than the Syrian settlement after the meeting, it raised speculation over whether the two leaders had actually agreed on something that would soon produce actions on the ground or had failed to find themselves on the same page. Erdogan did say after the meeting that Turkey and Russia would focus on a political solution in Syria. Putin noted that joint work on Syria among Russia, Turkey and Iran continues successfully, and the level of violence in Syria has decreased thanks to these efforts.

Yuri Mavashev, head of political research at the state-run, Moscow-based Center for Modern Turkish Studies, believes that even though the men didn't have a lot to say to the press about the sensitive topics of Syria and Kurdish groups, these topics — especially the congress — most likely prevailed during the talks.

"This congress is an important political option for a peace settlement in Syria, as [are] talks in Geneva and Astana [Kazakhstan]," he told Al-Monitor. According to the expert, Russian-Turkish relations have reached an unprecedented level of cooperation. “It is very important for both countries to coordinate their actions in Syria, paying attention to the growing influence of the SDF [Syrian Democratic Forces] in Syria,” he added. Turkey believes that weapons the United States has supplied to the SDF wind up in the hands of the PKK, which Turkey considers a terrorist group.

The strong cooperation was also mentioned several times by Russian Middle East experts during a Nov. 8 panel discussion on Russian-Turkish relations and developments in the Middle East, organized by the Moscow-based International Institute of the Development and Science Cooperation, which Al-Monitor attended. The institute is allegedly affiliated with the political movement of Erdogan's arch-rival, US-based Muslim cleric Fethullah Gulen, whom Erdogan blames for the July 2016 coup attempt.

“The agreement with Turkey on Syria has lately become the biggest achievement of Russian diplomacy,” panel member Veniamin Popov said at the gathering. Popov is a retired Russian ambassador to Yemen, Tunisia and Libya; coordinator of the group Russia-Islamic World; and Putin's special representative for relations with the Saudi Arabia-based Organization of Islamic Cooperation.

The operation Russia launched in Syria in September 2015 has become a new milestone, not only in the development of the Middle East but also because, according to Popov, it marked the end of the unipolar world. “Russia is now a key country in the Middle East,” he said.

However, Russia’s new role in the region demands more active and cautious diplomacy and an ability to support good relations with the key regional countries. In this respect, Russian-Turkish relations, which survived the jet crisis, are an example of a partnership of uneasy compromise. The Syrian Kurds issue continues to be an apple of discord between Moscow and Ankara. While Moscow wishes to include them in the Syrian peace process, Ankara will do everything possible to prevent that — and it hasn't ruled out military intervention.