Moscow weighs the pros and cons of a Turkish proposal on Syrian oil. 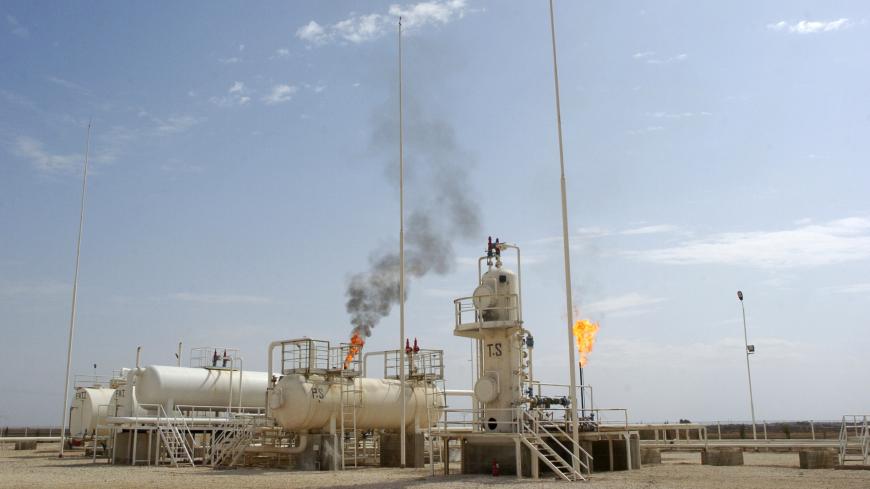 A flame rises from a chimney at Al-Jbessa oil field in al-Shaddadeh in Hasakah province, Syria, Oct. 14, 2010. - REUTERS

Turkish President Recep Tayyip Erdogan stated that he invited Vladimir Putin to jointly manage the oil fields in the Syrian province of Deir ez-Zor instead of the Syrian Democratic Forces (SDF), which is led by the Kurds who currently control the fields.

“I made the offer to Mr. Putin that if he gives financial support, we can do the construction, and through the oil obtained here, we can help the destroyed Syria get on its feet,” Erdogan told reporters March 10.

Erdogan said the Russian leadership is considering this proposal, which a Turkish delegation presented during a recent summit in Moscow. Erdogan said the same offer could be made to President Donald Trump.

“Instead of terrorists benefiting here, we would have the opportunity to rebuild Syria from the revenues of this [oil field],” Erdogan added.

His words may indicate that Russia and Turkey agreed at a recent Moscow summit to not only freeze the conflict in Idlib and launch joint Russian-Turkish patrols along the M4 highway, but also to continue joint actions in eastern Syria to force the Kurds and local tribes to reach a compromise with Russia and Damascus.

It is not clear, however, how the parties can find balance here. As Al-Monitor reported, Ankara has every reason to suspect that once the road map between Bashar al-Assad and the Kurds is approved by both parties, the latter will look to sideline Turkey with the backing of Egypt, Saudi Arabia and the United Arab Emirates.

However, in any case, an agreement on northwestern Syria with an eye toward future cooperation is better than an additional Sochi 2.0-style accord, which would simply delay escalation but not prevent the scenario Damascus wants to implement: alternating between cease-fires and offensives to bite off as much territory as possible in Idlib province and further weaken the opposition.

Alexey Malashenko, a Moscow-based analyst, noted, “When Erdogan was in Moscow to meet with Putin, he said that despite the controversies over Idlib, the relations [between Russia and Turkey] are those between partners and they cannot be lost. From this standpoint, his proposal for joint development of oil fields is symbolic. One can hardly make big profits [off those oil reserves]. Yet the very idea of 'let's cooperate no matter what' in the field of economics is a good place for our positive engagement in Syria.”

At the same time, Erdogan’s statement is a form of trolling and, as with all politicians' words, diverges from reality. We can currently talk about several routes for exporting oil from SDF-controlled wells.

The first is to supply the Assad regime. After the SDF seized the oil fields from the Islamic State (IS), and the Russian mercenaries and pro-Iran militias realized the futility of efforts to repulse them militarily, the Syrian Katerji brothers reoriented their mediation efforts in 2019 from the oil trade between Damascus and IS to the trade between Damascus and the SDF, which triggered US sanctions.

The second is to supply oil to the Syrian opposition inside the Turkish buffer zone. The Kurds interrupted this process due to hostilities, but it has seemingly resumed again.

The third is to export through Iraqi Kurdistan. The United States has built a new bridge on the Syrian-Iraqi border for such conveyance. Earlier, the Russian Defense Ministry used satellite images to accuse the United States of smuggling raw materials and making more than $30 million daily off this trade. The Russian military argued that these funds are being deposited into the accounts of foreign special services and private military contractors.

While it is not clear what, exactly, the Americans get from this enterprise, it's important to note that, in the end, oil is being exported through Turkey. Incidentally, Russian generals and even Putin himself spoke loudly and in detail about this after a Turkish F-16 shot down a Russian military plane on the Turkish-Syrian border in November 2015. Currently, the Russian ministries of Defense and Foreign Affairs are speaking out against US actions to control oil fields in eastern Syria, preferring not to pay attention to Turkey’s participation in the energy sales scheme. However, this does not prevent Assad and Bashar Jaafari, the Syrian representative to the United Nations, from speaking openly about the US sales of the “stolen” oil to Turkey.

According to Al-Monitor sources in northern Syria, the profits help the SDF (Kurds and local tribes) “make ends meet." The Turks also work with the SDF, and they are ready for the Kurds to cooperate with Damascus, as well as for the long-term US presence, despite the American elite's different approach to the current Syrian policy.

Al-Monitor has reported on another oil route — to Israel. While American-Israeli businessman Moti Kahana categorically denied the Syrian Democratic Council’s assistance in selling oil to Israel, the Jewish state has shown increased interest in supporting Syrian Kurds to counter Iran’s influence, while Tehran itself needs eastern Syria to carve an uninterrupted route to supply its proxy forces in Syria and Lebanon. This is partly why Iran has strengthened relations with the Kurdistan Workers Party in recent years.

As Malashenko correctly pointed out, Syria's oil wealth is often exaggerated. It is clear that Russia would like Damascus to control the main fields to reach some level of self-sustainability, but the volume of production in Syria will gradually decrease — a process that began long before the Arab Spring. Even if we take into account the monthly income of $30 million, as mentioned by the Russian Defense Ministry, this figure is insignificant from the perspective of world energy trade. All players involved in oil exports here can only aim to solve some tactical tasks.

In the medium term, Moscow could try to become a Kurdish advocate. It could offer SDF units the opportunity to join a structure such as the 5th Corps (which operates under the auspices of the Russian Ministry of Defense) on attractive terms. This could act as a deterrent to the Iranian formations and help restart dialogue with the West and Gulf countries, with corresponding benefits for Syria.

There is, however, another option: to find ways to fill the void of the regime authority east of Euphrates with the help of units loyal to Iran within the Syrian army. This is what Damascus and Tehran will push Moscow to do. Such a scenario is convenient for Russia’s tactical allies — Iran and Syria, that is — but, given the factor of Israel, this option is confrontational. Moreover, in principle, the United States has the capacity to reform the SDF's structure by essentially creating a new structure that would rely only on local tribes and could be supported by both American nongovernmental organizations and profits from Syrian oil sales.