Israeli settlers are pressuring the government for more investment in security, but no matter how generous the ultimate outlay, it will not prevent the next wave of casualties from terrorism as long as the occupation status quo persists. 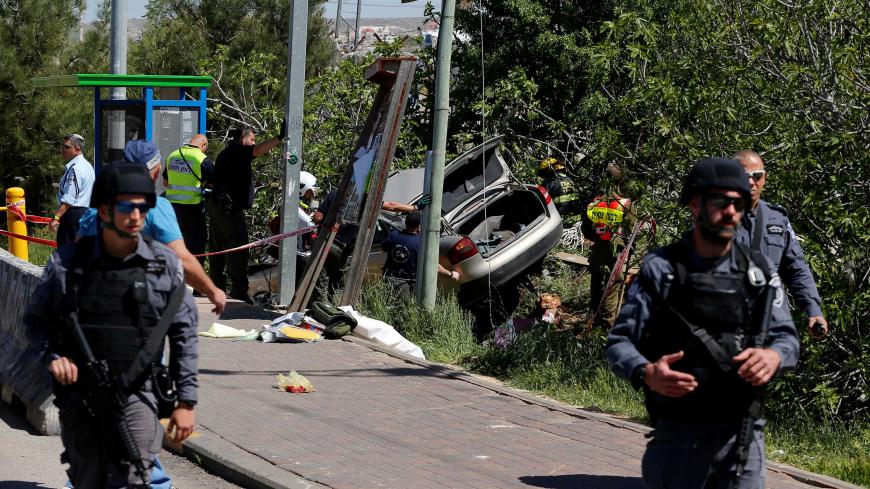 When Prime Minister Benjamin Netanyahu walked into the Likud conference room at the Knesset on Nov. 6, he knew that the families of terror victims would be waiting for him there. They were the same families who had been holding a hunger strike outside his Jerusalem residence for the past two weeks. They were demanding hundreds of millions of shekels, which they claim have been promised to them, to fund the paving of roads to bypass Arab villages and to install defensive measures at their settlements.

Netanyahu arrived prepared. He brought with him a check for 200 million shekels ($57 million) to increase security on West Bank roads, having discussed the issue with Finance Minister Moshe Kahlon. The leaders of the protest knew about this in advance, but they still refused to forgo their organized attack on Netanyahu. It was broadcast live on all the media outlets with representatives in the room.

Both sides — the settler leaders as well as Netanyahu — benefited from the highly publicized event. As far as the settlers were concerned, 200 million shekels is just a drop in the bucket. They want a security package to include the paving of bypass roads, the installation of street lights, security cameras and sophisticated fencing, and upgrades to improve cellphone infrastructure, all of which would cost a minimum of 3 billion shekels ($850 million). As far as Netanyahu was concerned, the attack on him allowed him to present a budgetary "achievement" that the right favors and perhaps even distract the public from the police investigation of two of his confidantes, attorneys David Shimron and Yitzhak Molcho, in the German submarine scandal.

Under normal circumstances, Netanyahu makes a point of showing up late to Likud meetings. This time, however, he arrived on time, so he could announce, "I am coming from a meeting with the finance minister, where we decided together to immediately set aside 200 million shekels to pave roads that have been agreed upon already. … In early January, we will initiate a Cabinet discussion to approve the allocation of another 600 million shekels to complete the roads and lighting."

Despite this announcement, the families of the terror victims interrupted him. Knowing that this would happen, Netanyahu allowed them to attack him in front of the cameras as much as they wanted. He even silenced Knesset member Nava Boker when she tried to make the point over all the shouting that the protests had achieved their goal. The money had been transferred. She was right about that.

Netanyahu displayed empathy as he listened to their claims and with a stern expression listened to Adva Biton, the mother of 2-year-old Adelle, who was wounded in 2013 by a rock thrown on a West Bank highway and died from her injuries in 2015. "I buried my daughter at age four and eight months. What are you waiting for, the next disaster?" the girl's mother cried.

Security is a bottomless pit. There is no end to the defenses, wall and bypass roads to pave. No less important to personal security, however, is knowing the truth.

The settler protests over security gathered momentum last July, after the horrific attack in the settlement of Halamish. In that incident, a Palestinian infiltrated a home and murdered Yosef Salomon, his daughter Chaya and his son Elad, gathered around the table for their Sabbath meal. Salomon's surviving daughter Racheli Menzali, having lost her father and two siblings in the attack, wrote the prime minister a letter stating, "I have a hard time understanding how the leader of the national camp will not let the most basic security needs be provided to the settlements and main roads in Judea and Samaria."

According to the Central Bureau of Statistics, some 400,000 Jews now live in the West Bank, in major settlement blocs and isolated settlements and outposts. They are exposed to terrorism on a daily basis because of their proximity to the local Palestinian population and the friction that ensues. As far as they are concerned, their demand that the right-wing government act to improve their personal security is only natural and should be taken for granted.

Defense Minister Avigdor Liberman estimates that a comprehensive plan to improve security would cost approximately 3.3 million shekels ($938,000). He made this assessment in a meeting with the settlers’ leaders, based on a plan prepared by his ministry. He then said that there was no budget for it, sending the settlers off to exert political pressure to find the money.

The settlers' desire to prevent the next attack is little more than a pipe dream, especially as long as the diplomatic circumstances of the occupation persist or the situation intensifies. In other words, as long as the Palestinian aspiration for self-determination is alive and kicking, the West Bank will not be a safe place for Israeli citizens and soldiers. It will remain that way, even if billions of shekels from the state budget are invested in bypass roads, lighting and checkpoints. The facts speak for themselves. A way will always be found to launch the next attack.

This was the missing angle at a Nov. 1 Likud meeting that included a political discussion about the settlers' protest. Not one major figure on the center-left took advantage of the opportunity to raise a challenge by bringing up this point. It can be assumed that the reason is that the two major parties in that camp, Labor and Yesh Atid, are busy investing considerable resources in recruiting votes on the right.

It is worth remembering the harsh years of terrorism in the Gaza Strip, such as along the Philadelphi Route, running along the Gaza-Egypt border. From the start of the first intifada in 1987 until the 2005 disengagement, terrorism made it almost impossible for the people in the Katif settlement bloc to live a normal life. It didn't stop even when vast sums of money were invested in sophisticated defensive measures and enormous numbers of troops deployed there.

Settler children were driven to school in armored buses under heavy security, but the attacks did not relent. The Palestinians replaced Molotov cocktails with rifles and artillery, so Israeli soldiers were still sitting ducks. One of the reasons provided for the disengagement was security, both in terms of cost and effectiveness.

A healthy debate over how to ensure the security of settlements in the West Bank must include the contention that any investment in security, no matter how generous, will not prevent the next wave of casualties from Palestinian terrorism. This does not mean that the settlers should be left to their fate, but that is also far from the situation today. Studies and research over the past few years have shown that the budget per Israeli Jew is greater than it is per person within the Green Line. There is no transparency in this part of the budget, so it is hard to know what the sums actually cover.

Nevertheless, one thing is certain. Security is a bottomless pit. There is no end to the defenses, wall and bypass roads to pave. No less important to personal security, however, is knowing the truth. None of these security measures will prevent terrorism.