The Detained Youth Committee for Presidential Pardon has launched an initiative to examine reintegrating and rehabilitating pardoned prisoners to address the difficulties they face after their release. 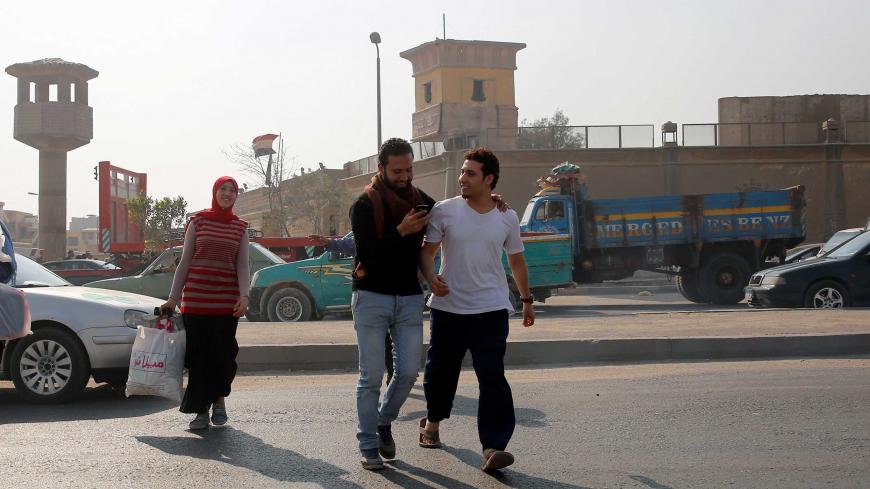 A released detainee (R) and his brother are seen after his release from prison, in front of the main gate of Tora Prison in Tora, Egypt, March 14, 2017. The man was released following Egyptian President Abdel Fattah al-Sisi issuing a pardon to 203 youths jailed who took part in demonstrations, as part of a pledge he made to amend a protest law. - REUTERS/Amr Abdallah Dalsh

CAIRO — Egypt’s Detained Youth Committee for Presidential Pardon will issue the latest list of inmates to receive pardons after the World Youth Forum, which kicks off in Sharm el-Sheikh on Nov. 4. President Abdel Fattah al-Sisi and relevant ministers are scheduled to make appearances at the six-day event.

The committee had launched an initiative on Sept. 26 to examine the issues of pardoned prisoners being able to return to their studies or government jobs as well as psychological rehabilitation programs to help them overcome the effects of incarceration.

Sisi established the Detained Youth Committee for Presidential Pardon last year, on Nov. 1, following a recommendation by the first National Youth Conference, held in Sharm el-Sheikh Oct. 24, 2016, to identify detained youths who appear to be eligible for pardons. Among those eligible, for example, are prisoners convicted of crimes related to politics.

In September 2015, dozens of political activists accused of violating the Protest Law and two journalists from Al Jazeera English allegedly involved in the so-called Marriott terror cell were released through a presidential pardon. Two years later, on March 13, Sisi issued a second pardon, releasing 203 young men sentenced for their role in rallies and protests. The third pardon followed on July 23, freeing 596 inmates, and 211 prisoners were released by a pardon issued on Sept. 12.

Parliamentarian and Detained Youth Committee member Tariq al-Kholi told Al-Monitor, “The idea of rehabilitating released prisoners was initially raised at the first meeting between the members of the committee and President Sisi in November 2016. Sisi subsequently issued his recommendations to all concerned ministers to cooperate with the committee to set up a complete plan for the rehabilitation of released prisoners and to provide it with facilities.”

Kholi added, “The committee held meetings on Oct. 28 and 29 with the ministries concerned with this initiative, namely the ministries of Youth, Social Solidarity, Education and Higher Education. The meetings discussed psychological rehabilitation programs for released prisoners, as well as the development of laws allowing the released to return to their jobs.”

He further explained, “These meetings mainly sought to amend certain regulations and laws to facilitate the re-employment of released prisoners who were dismissed from their jobs or help them return to their universities, whether public or private.” The amendments and the design of psychological rehabilitation programs will be drafted after the World Youth Forum.

Two years ago, Omar Hazeq, a political activist, had been hopeful about returning home after his name appeared on a September 2015 list of 100 prisoners to be pardoned. He was enthusiastic about going back to his old government job and getting his life back. Once outside prison walls, however, his hope faded. He found himself stigmatized and socially restricted by his status as a former prisoner.

Hazeq was sentenced to two years in prison and fined 50,000 Egyptian pounds ($2,833) on Feb. 16, 2014. He had been arrested on Dec. 2, 2013, under Protest Law No. 107 (2013), for taking part in an unauthorized demonstration outside an Alexandria court to denounce officers accused of beating to death Khaled Said in 2010 while in police custody. Hazeq told Al-Monitor about the difficulties he faced after his release.

“While I was serving my time, I was fired from my job as an Arabic-language editor at the Bibliotheca Alexandrina, on April 22, 2014,” Hazeq said. “The president of the library alleged that the crimes I was convicted of threatened the regime. I also found out on Jan. 14 of this year that I had been slapped with a travel ban, when security authorities prohibited me from traveling to Austria to receive an international prize in literature.”

Hazeq added, “Hundreds of released prisoners, who served their time or were freed by a presidential pardon, have found themselves jobless, whether they worked in the government sector or the private sector. Add to this the continued harassment by the police after their release. In February, I was arrested and interrogated at one of the security services' headquarters. Some of the released prisoners are put under security surveillance or ordered not to leave their homes, a measure similar to house arrest.”

Hazeq said that whenever he applies for a new job, he has to provide a judicial record, which kills any chance of being employed. “The Civil Service Law only provides for the dismissal of employees charged with crimes that violate honor and trust,” Hazeq said. “This is not my case.”

For the time being, Hazeq has no faith in the social integration initiative for pardoned prisoners launched by the Detained Youth Committee. This will remain the case as long as the regime continues to harass its political opponents and imprison those who dare to criticize its policies.