Why jailed founders of Egyptian youth movement have not been pardoned

The youth pardon committee set up by President Abdel Fattah al-Sisi has not recommended the release of three young political activists who participated in Egypt’s revolutions. 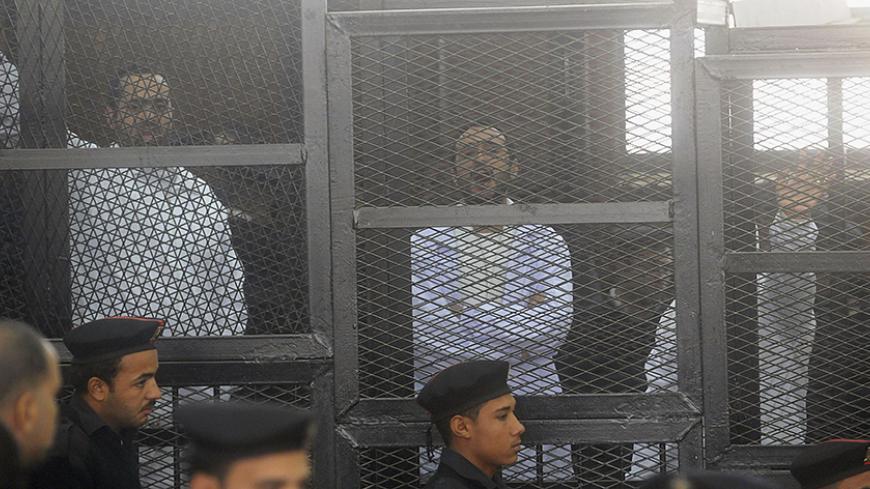 On Nov. 14, Egypt’s Detained Youth Committee issued a list of detainees to be pardoned, but the list did not contain the names of a group of youths who are well known in the political and revolutionary scene, namely Alaa Abdel Fattah, Ahmed Douma and Ahmed Maher, founders of the April 6 Youth Movement. Their exclusion from the list did not take into account the call of the Egyptian National Council for Human Rights (NCHR) to release them.

On Oct. 27 and as part of the recommendations of a youth conference held in Sharm el-Sheikh, President Abdel Fattah al-Sisi issued a decision to form the presidential Detained Youth Committee, under the direct supervision of the presidency and whose mission would be to conduct a thorough examination of the young people in custody.

Following Sisi’s announcement of the committee's formation, NCHR member Abu Saada said in a press statement Oct. 31, “The NCHR has repeatedly called for releasing Douma, Abdel Fattah and Maher along with other activists who are unknown to the media, with hopes of easing the political tension and reaching political reconciliation between the forces of the June 30 Revolution — but the government is taking a strict stance against these young people.”

Journalist Nashwa al-Hofy, a member of the Detained Youth Committee, raised controversy when she blogged Nov. 13 about “refusing the idea of releasing Abdel Fattah, Douma and Maher, because they were sentenced on charges of assaulting police officers, soldiers and the state’s facilities as well as insulting the judiciary.”

For her part, Nourhanne Hifzi, Douma’s wife, attacked Hofy and criticized the committee, saying its members are not well-informed about this the three activists’ imprisonment.

The Detained Youth Committee — headed by Osama al-Ghazaly Harb, the chairman of the Board of Trustees of the Free Egyptians Party — includes Hofy, lawyers Mohammed Abdel Aziz and Tarek el-Khouly — also a member of parliament — and Karim al-Saqa, a member of Sisi’s electoral campaign before his election as president.

Mustafa Maher, Ahmed Maher’s brother, said in a Nov. 13 press statement in response to Hofy that he does not “trust the Detained Youth Committee. It does not operate or judge fairly, and it is explicitly expressing hostility against certain people who were [only] accused of protesting.”

It seems that the state will not propose the names of Douma, Abdel Fattah and Maher for pardon, which raises a question about the reasons why the state refuses to release them and whether it fears their presence outside of prison.

In a Nov. 16 television statement, Hofy accused Abdel Fattah of stealing a gun from an army officer during the Maspero demonstrations in 2011, wondering, “How can Douma, Abdel Fattah and Maher be released when they were accused of burning state institutions?”

Gamal Eid, an activist at the Arabic Network for Human Rights Information, told Al-Monitor, “Some state departments and other parties want to take revenge on the young people who participated in the January 25 Revolution, especially Abdel Fattah, Douma and Maher for their ability to rally the people and for their reputation in the street and among the revolutionary forces.”

He added, “The revolutionary forces have to continue campaigning for the release of Abdel Fattah, Douma and Maher without giving into the repression campaigns in order for the public opinion to remain concerned about the issue of releasing the activists and the rest of the detained young men.”

Gen. Ashraf Amin, former assistant minister of interior, denied all news about the state refusing to release Douma, Abdel Fattah and Maher or to put certain names on the pardon list. He told Al-Monitor that the president set up a Detained Youth Committee to lay down certain rules for pardons and to study the cases of the detained young men. But the conditions required by the committee were not available in the cases of Douma, Abdel Fattah and Maher.

He added, “Society rejects the principle of pardon for those accused of burning state institutions, such as Douma, who is accused of burning the Institute of Egypt. But the presidency has the right to issue a pardon for whom it deems fit,” noting that he refuses “the idea of pardoning the defendants. This decision must be implemented only for humanitarian reasons and health conditions in order to preserve security; however, pardoning whoever burns state institutions or attacks police officers is out of the question.”

Amin explained, “There are well-known conditions for pardon, such as monitoring behavior inside prison to see if the defendants are fit to return to the community without repeating the same crime they were charged with. If Douma, Maher and Abdel Fattah are released without applying the rules, it would be disrespectful to the law and chaos would prevail.”

However, Amin praised the presidency's decision to release a large group of students and young people in custody, stressing that the decision shows the president’s good intentions and is proof that he does not target anyone in particular, which was also stressed by Sisi himself during the youth conference when he called on granting pardons for young people in custody on protest charges.

Despite the government’s efforts to alleviate public anger by releasing some detained youths, the Detained Youth Committee’s exclusion of symbols of the revolution such as Douma, Maher and Abdel Fattah is being met with anger by revolutionary forces but welcomed by supporters of the current regime. This is because of the youths’ harsh positions against the Egyptian president and state.