Rehabilitation centers in the Gaza Strip are implementing employment programs to help inmates acquire or improve practical skills during their incarceration. 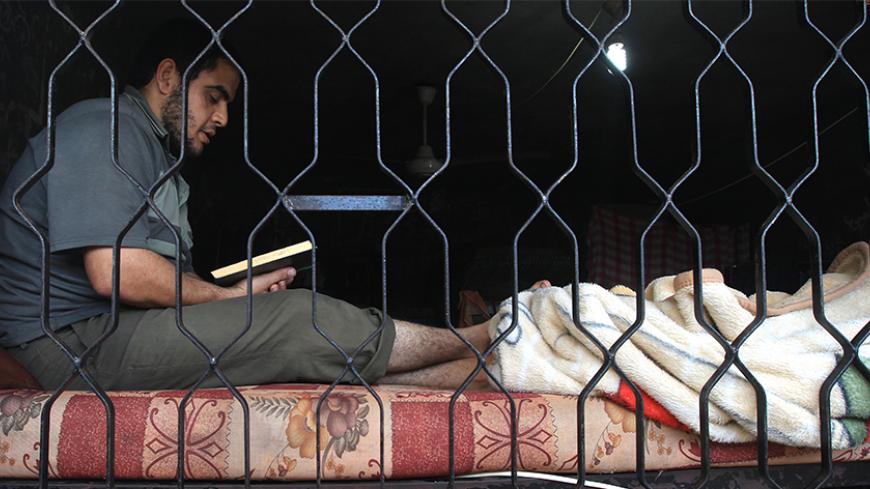 A Palestinian prisoner reads in a cell in the Hamas-run Ansar prison in Gaza City, Oct. 4, 2012. - MAHMUD HAMS/AFP/Getty Images

GAZA CITY, Gaza Strip — Rehabilitation and re-entry support centers in the Gaza Strip house hundreds of prisoners who are incarcerated for crimes and violations of the law. Based on the idea that imprisonment is aimed to reform and rehabilitate and not punish, these centers seek to implement educational and employment programs during the prisoners’ stay in prison.

In this context, the Reform and Rehabilitation Center in Deir al-Balah governorate inaugurated Fateh Bakery on May 18, in collaboration with the Edmaj Aftercare Center. On Jan. 6, the Reform and Rehabilitation Center opened as part of its Productive Inmate project, which aims to employ inmates and includes a sewing factory and a handcraft workshop.

The director of the sewing factory, inmate Abu Akram (a pseudonym), told Al-Monitor, “Before being imprisoned I owned a sewing factory in eastern Gaza City, and this is why the administration decided to assign me as the official in charge of this factory. They asked me to train other inmates in sewing, who currently number 15."

He said, “My experience was limited to the field of ready-to-wear clothes. Israeli traders would place an order and send me a model [to work on], and I would send them back [the clothes they had ordered] to be sold in Israel. Now I can design and make custom-made clothes.”

Abu Akram, 53, who has served 8½ years of his 15-year sentence for drug trafficking, said that he has benefited from the sewing project in many ways. By practicing his profession he feels more optimistic and he is able to support his family of seven on his weekly salary of 200 Israeli shekels ($50). He said that working hours are flexible, the center’s administration provides inmates with the necessary facilities for the completion of their work, and the promotion and sales of products are supported.

Inmate Abu Ahmed (a pseudonym), who has served six years of a 15-year sentence for drug trafficking, told Al-Monitor at the handcraft workshop that embroidery and the manufacturing of wooden frames and cotton cushions has been his hobby since his childhood. He said that before the launch of the Productive Inmate project in January, he created products that he sold inside and outside the prison through one of his relatives who marketed his products.

Abu Ahmed, 52, added that before the handcraft workshop was set up, no sharp tools were allowed inside the prison cells except for blunt needles, a few pieces of cloth and some pieces of string.

While rehabilitation and re-entry support centers are affiliated with Gaza’s Ministry of Interior, the lack of financial resources — provided by the Hamas government, and thus the Interior Ministry — forces these centers to appeal to international and regional institutions for the support of programs for inmates.

Sameh Hamdan, the chairman of the board of directors of the Edmaj Aftercare Center, told Al-Monitor that once the judge decides on incarcerating someone in a rehabilitation and re-entry support center, the inmate starts working immediately in a job that suits his skills. He said that this process aims to curb the spread of crime in the Gaza Strip and to provide a source of support for the inmates’ families.

In this context, Article 41 of Law No. 6 of 1998 regarding rehabilitation and re-entry support centers states, “The center shall seek to train the inmates professionally and develop their skills as well as make them acquire beneficial trades or professions during the period of execution of the punishment that would help them earn their living after their release. The theoretical and practical vocational training shall be carried out in the training and employment workshops inside or outside the center according to the regulations and instructions issued by the Directorate General [of Rehabilitation and Reform Centers] in this respect."

Hamdan said that Fateh Bakery falls within the scope of the program for the economic empowerment of prisoners and released prisoners launched by the Edmaj Aftercare Center in early 2015, noting that the Bahraini al-Eslah Society contributed $140,000 to the funding of the bakery.

“The revenues and profits of [Fateh Bakery] will be deposited in a fund allocated for the payment of outstanding debts by some impoverished prisoners, detained for failing to pay their debts,” he said.

Hamdan explained that the criteria for the selection of prisoners to work at the bakery are based on the inmate's health, physical ability to work, skills and the economic situation of his family. The Edmaj Aftercare Center and the Reform and Rehabilitation Center collaborate closely in the selection of the prisoners who may work at the bakery, to make it a viable project.

He added that prisoners do an internship before starting work at the bakery. “The bakery is open 15 hours a day with a production capacity ranging between 4,000 and 5,000 loaves of bread per hour. Twenty inmates are employed with 10 of them working a 7½-hour shift,” he said.

For his part, the head of the Reform and Rehabilitation Center, Chadi Yassin, told Al-Monitor that the center implements several educational and employment projects for the prisoners to encourage them to become better citizens, noting that the center resorts to the private sector to finance projects due to the government’s lack of financial resources.

“Inmates can choose the activity or the program they would like to be part of, but the scarcity of employment programs forces us to set specific criteria to choose the inmates who will benefit from the projects, since we cannot employ everyone,” he said.

Yassin added that inmates are divided into three categories: The first group includes inmates who are fully committed to follow instructions in terms of the implementation and respect of orders inside prison, avoiding problems with other inmates or inciting them to escape; the second group includes those who only abide by the law when supervised; and the third group includes the most dangerous inmates, accounting for only 1% of prisoners, who are employed under tight security measures. The latter do not generally follow instructions and are more likely to use violence.

According to Yassin, the work program distinguishes between these groups of prisoners to limit any possible breaches on the part of inmates, stressing that the center is equipped with surveillance cameras and security guards are deployed throughout the center.

As per the regulations of the rehabilitation and re-entry support centers in the Palestinian territories, any financial returns made by these projects shall revert to the centers, provided that one-third is allocated to the inmate and his family. In addition, Article 44 of Law No. 6 of 1998 stipulates that inmates need to be paid for their work inside or outside the prison, according to set wages as per the center’s rules and regulations.

The Reform and Rehabilitation Center for Women in Gaza City, the only women's prison in Gaza, organized on March 12 an exhibition under the name Ishrakat Amal (Shining Hope) for hand-made crafts and embroideries by male and female inmates. The event saw a large turnout of citizens and more than two-thirds of the products were sold.

In this context, Amal Nofal, a warden at the women's prison, told Al-Monitor, “The Rehabilitation and Reform Center inaugurated two projects at the beginning of 2015 — one for the bakery that sells pastries and sweets, and the other for handcrafts and embroideries, in collaboration with Edmaj and funded by al-Eslah Society. The projects aim to help inmates secure their needs through financial remuneration and acquire skills and professional experience enabling them to work once they leave prison.”

Nofal said that a number of inmates who underwent intensive training before being allowed to work at the bakery were chosen for these projects according to specific terms and conditions.

Through these programs, inmates in the Gaza Strip leave prison having acquired a new skill set, profession or degree, as inmates are allowed to pursue their studies in addition to attending seminars on legal, religious, scientific and literature topics. This helps them improve their perceptions and way of thinking, raising their awareness and rendering them better citizens.