How Palestinian female inmates are getting a second chance

The General Directorate for Correction and Rehabilitation Centers in the Gaza Strip held a two-day exhibition to display and sell handicrafts and handmade products made by female inmates. 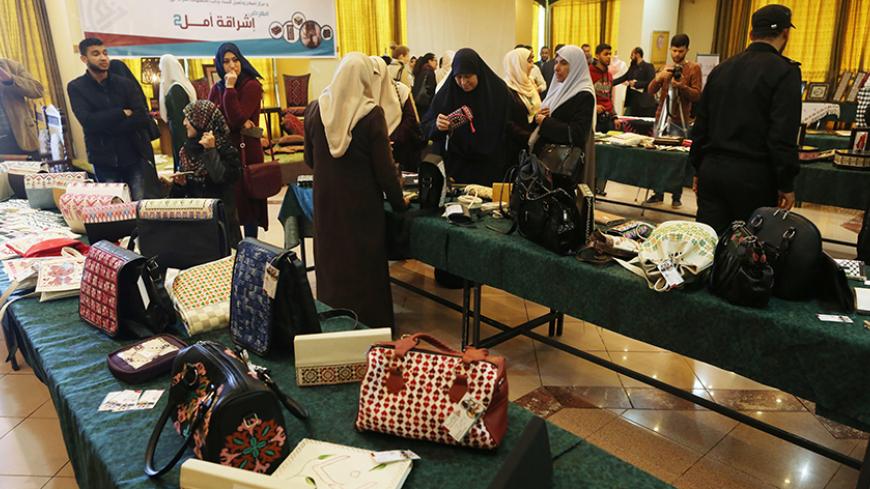 GAZA CITY, Gaza Strip — The General Directorate for Correction and Rehabilitation Centers, affiliated with the Ministry of Interior and National Security, which is responsible for managing civil prisons, inaugurated the “Glimmer of Hope” exhibition on March 26. For two consecutive days, handmade products made by about 40 female inmates serving sentences for various crimes in prisons in Gaza were displayed and sold.

The exhibition caught the attention of many citizens and the media, and included three different categories: handicrafts and embroidered outfits; furniture inlaid with Palestinian rural embroidery and artistic items; and food such as pastries and desserts.

Amal Noufal, the head of the Center for Correction and Rehabilitation of Women in Gaza, told Al-Monitor, “The exhibition aims to achieve several goals, the most prominent of which is empowering and financially supporting inmates to enable them to launch their own projects after they have served their sentences, as well as improve the social image of inmates."

Funds are collected for the inmates to take part in the crafts training and educational programs that are run under the auspices of the General Directorate for Correction and Rehabilitation Centers, which provide them with all the materials needed free of charge.

According to the directorate, it deals with the inmates as victims of the Israeli siege imposed on the Gaza Strip since 2007, and who have suffered from the economic deterioration, unemployment and poverty, which in turn pushed those inmates to commit their crimes.

As of the end of 2016, unemployment rates among female participants in the labor force in Gaza and the West Bank reached 44.7%, compared to 22.2% for their male counterparts, according to a press release by the Palestinian Central Bureau of Statistics published on the eve of International Women’s Day, on March 7.

The inmates who took part in the exhibition were eager to show society that they are good and productive women.

Inmate K., 43, who displayed pastries and desserts, told Al-Monitor, “We stood at our allocated corners to display our products in the exhibition. We were happy and confident to talk with visitors.”

K., who was indicted for soliciting to murder her husband in 2013 and is now serving a seven-year sentence, said that she learned how to bake desserts, pastries and petits fours after she took a nine-month training course in the Gaza prison.

“When they sent me to prison, I cried for three days and I felt in so much despair, but today I feel overjoyed because of this. Thanks to the prison program, I was given a chance to assert myself in society and I learned a profession to support me in the future,” she added.

H., 24, contributed to the exhibition with clothes decorated with Palestinian rural embroidery. She told Al-Monitor that she discovered she had this talent at an early age, but she could not develop it until she became part of the prison program.

She said, “The exhibition gave me the opportunity to display my products for the first time in my life. I now have big hopes to take a new path in life. The exhibition made us believe that we should not return to our mistakes and that solving our economic problems is achieved through production rather than unlawful actions."

According to Noufal, only 5% of female prisoners released after serving their sentences go back to crimes punishable under the law, such as theft or dealing drugs, while 95% of released inmates never commit a crime again.

Brig. Gen. Fouad Abou Boutihan, the head of the General Directorate for Correction and Rehabilitation Centers, told Al-Monitor, “The logic behind organizing such exhibitions is to lower the crime rate in the Gaza Strip and to give female prisoners the opportunity to avoid further wrongdoings in their lives.”

He said, “Organizing the exhibition is considered one part in a series of programs that the directorate organizes to rehabilitate inmates — males or females alike. We run ethical, religious, cultural, entertainment and educational programs."

The most prominent activities of these programs are the participation of male inmates in agricultural work, the organization of entertaining evenings, allowing inmates to communicate with their families through the internet and giving nonrefundable grants to very poor inmates.

Hoda Naieem, the Hamas-affiliated Change and Reform Bloc parliamentarian, participated in the exhibition and told Al-Monitor, “The exhibition is a message the inmates send to society telling it that they should be given another chance to prove that they are productive and that the mistakes they committed do not make them criminals. This is why the exhibition was named 'Glimmer of Hope.'”

Naieem explained that since Hamas came to power in 2007, it worked on changing the philosophy of punishment that once used to be based on an inmate merely serving the sentence inside the walls of the prison. “Today we have programs of correction and rehabilitation that aim to train female inmates, hone their skills and empower them to lead their lives with honor and integrity,” she said.

According to Women’s Affairs Center Director Amaal Siyam, holding this exhibition is a step forward to reintegrate female inmates in society.

“They find psychological relief when they practice and produce crafts during their sentences, as they make use of the time they spend behind bars,” Siyam told Al-Monitor. However, she stressed that what is more important than organizing such exhibitions and training inmates in the art of crafts is to guarantee them a decent life and financially support them to start their own projects after completing their sentences, to eliminate the motives for committing another crime. However, this is not available now. “Correction and rehabilitation centers don’t give that kind of support to inmates,” she added.

The prison experience seems to have given female inmates a motive to start a new life. “When my sentence is over, I look forward to honing my skills, starting my own pastry and dessert startup and correcting the negative image society has of me,” inmate K. said.