Why these Gazan inmates are picking up a pen behind bars

Nine inmates in the correctional and rehabilitation center in the Gaza Strip joined the project to handwrite the holy Quran using Uthmanic calligraphy in an effort to obtain privileges in prison and have their sentences reduced. 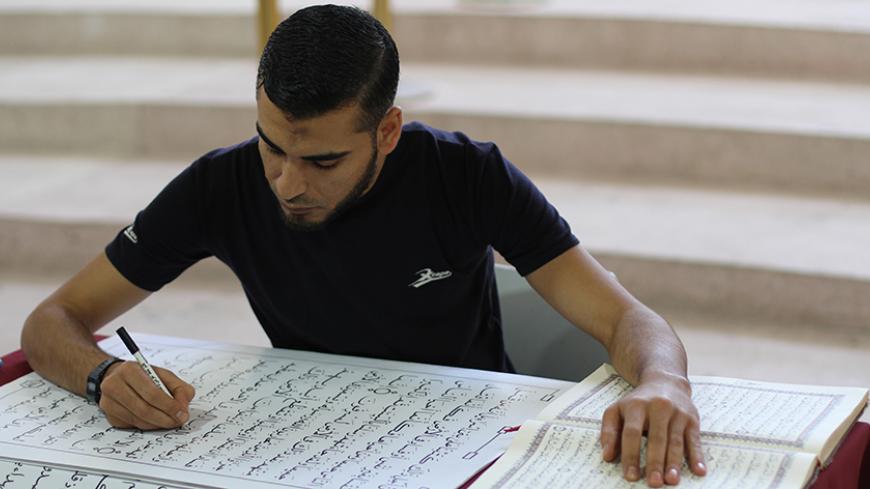 A Palestinian inmate handwrites the Quran as part of a course aimed at altering the behavior of inmates at the correctional and rehabilitation center in western Gaza City, Gaza Strip, Nov. 9, 2016. - Ahmad Abu Amer

GAZA CITY, Gaza Strip — In mid-October, a number of Palestinian inmates in the main correctional and rehabilitation center in western Gaza City embarked on a project to handwrite the holy Quran using Uthmanic calligraphy. The project came in an effort by the inmates to expiate their guilt in the hopes of obtaining privileges inside prison and having their sentences reduced.

Nine inmates, who took Uthmanic calligraphy courses, joined the project, which is sponsored by Dar Al-Quran and Sunnah in Gaza City. Those in charge of the project expect the project to be finished by the end of the year.

Handwriting the Quran is one of the projects carried out by the correctional and rehabilitation centers in the Gaza Strip, to alter inmate behavior and prompt them to benefit from their time in prison. As a result, the correctional and rehabilitation centers free many inmates for good conduct after they have served two-thirds of their prison sentences.

Massoud Abu Ras, the director of the division of religious preaching and guidance at the correctional and rehabilitation centers in the Gaza Strip and supervisor of the project, told Al-Monitor, "The idea came after a series of programs were carried out [and] after they were highly welcomed by the inmates in recent months. Some inmates joined the literacy programs, others pursued their university studies or joined courses to recite the Quran that were behind the launch of this program."

Abu Ras added that the nine inmates who joined the project received several Uthmanic calligraphy training courses, and while only three have mastered it, the others are in charge of adding the diacritical marks and preparing the paper and tools for the daily work.

He said many inmates at the correctional and rehabilitation main center in Gaza City and other branches in the Gaza Strip demanded that they be allowed to join the project, but because the project was relatively small, given the lack of funds, there could only be a limited number of participants. Abu Ras expected the project to conclude by the end of the year.

The project is the first of its kind at the correctional and rehabilitation centers in the Gaza Strip. The size of the page where the Quran is copied is 50 by 70 centimeters (19½ by 27½ inches), and the 611 pages are supposed to be bound in a single book after being carefully examined by specialists, to be placed in the library of the correctional and rehabilitation main center.

The director of media and public relations in the correctional and rehabilitation center in western Gaza City, Mohammed Hassanein, told Al-Monitor, "The inmates took part in the project of their own free will," and noted that the overwhelming majority of the inmates welcomed the idea and that participants were selected according to specific criteria.

Hassanein added that the inmates who joined other suggested projects and demonstrated good conduct while serving their sentences obtained privileges similar to the participants in the project to handwrite the Quran. The privileges include making or receiving additional phone calls, and having family visits in private rooms, instead of being separated from their visitors by a glass partition.

He explained that the cases of participants will be examined by the correctional and rehabilitation center once the project is over so that they will be released once they serve two-thirds of their sentence, or even be granted a temporary release ranging between one to three days on holidays to go home and then return to prison.

Diab K., an inmate sentenced to four years in prison and a participant in the project who asked that his full surname not be revealed, told Al-Monitor that he took part in the project after the director of the religious preaching and guidance division at the prison told him about it. He liked the idea and asked to join it, particularly since he is good at Uthmanic calligraphy.

He stressed that once the project was launched, the administration at the center granted them many privileges, such as unlimited phone calls and many family visits during which they sit with their families without a glass partition.

Samir H., an inmate sentenced to 12 years in prison, who also asked that his full surname not be disclosed, told Al-Monitor, "When the project to handwrite the Quran first started, we worked between four to five hours per day. A few days later, we requested that the administration increase our working hours so that we can benefit from our free time. The administration agreed to increase working hours between eight to 10 hours a day."

He explained that he had participated in many programs and projects that were launched by the center to occupy inmates with purposeful programs aimed at improving their behavior while in prison and when freed. He hoped that his sentence, of which he has served four years so far, would be reduced once the project ends.

Iyad Salman, the director of Aftercare Center for Released Prisoners in Gaza City, told Al-Monitor that the project to handwrite the Quran and other projects are designed to alter the inmates’ behavior, which is a part of the rehabilitation of the inmates in order for them to become good members of their communities once they serve their sentences.

Salman noted that as an institution providing inmates with health and social care services, they found that the conduct of the inmates improved after they took part in such projects, which prompted the center to cooperate with correctional and rehabilitation centers in order to intensify and diversify their programs and projects.

He stressed that there are psychological, religious and occupational projects, the most recent of which is one involving the Fateh Bakery in Gaza City and the city of Deir el-Balah, and one involving a clothing sewing factory in the southern Gaza Strip, where inmates are employed in return for financial compensation.

The projects and programs, which increased in recent years due to some Arab donors providing financial support, have remained limited, given the insufficient financial support provided by the Palestinian government.