It's more than just liking photos and online check-ins; the Gaza Central Prison recently granted access to Facebook for 10 of its prisoners. 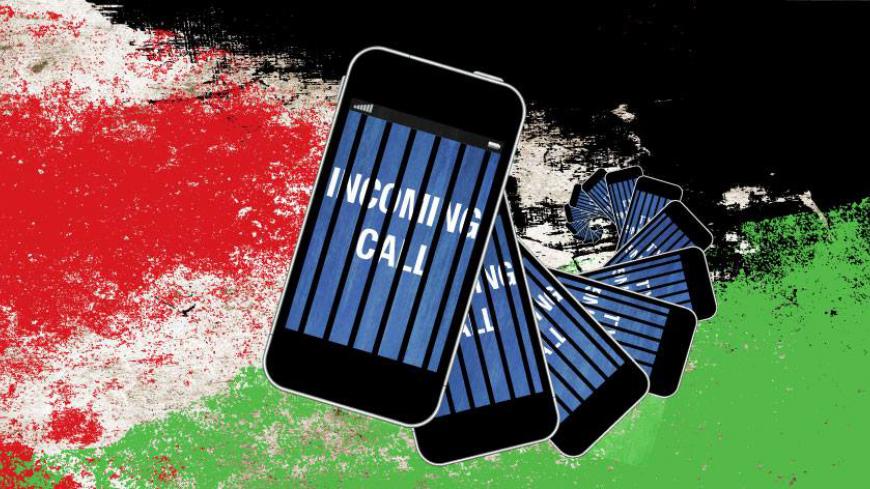 GAZA CITY, Gaza Strip — A number of Palestinian inmates at Gaza Central Prison in western Gaza City were allowed to connect March 21, via Facebook video calls, with family members residing outside the Gaza Strip and with whom they had not been in touch for years.

In cooperation with the Gaza Central Prison, the Interior Ministry and the General Administration of Prisons launched a campaign allowing 10 inmates serving long prison sentences to make video calls and check on family members who have been unable to visit for years.

The contacting of family members outside Gaza via Facebook is part of a process introduced by the Interior Ministry and the General Administration of Prisons to help alleviate the suffering of inmates unable to see their children, wives and parents. The programs introduced also include sports and social activities,

Capt. Mohammed Rujaila, the public relations and communications officer at Gaza Central Prison, told Al-Monitor, “As we are keen about their rehabilitation and rectifying their conduct, we are offering the inmates many facilities. This includes the possibility of communicating online with family members living abroad to check on and catch up with them.”

He added, “A number of the inmates’ family members who live outside the Gaza Strip were invited to join a Facebook page set up for this purpose; we thoroughly checked the accounts to make sure they were not fake. We told them that we represented the General Administration of Prisons and that their [imprisoned] relatives wanted to communicate with them.”

He said, “Ten inmates were able to communicate with their families for more than two hours twice a week each, in order to have enough time to see all of the family members. These video calls have positively affected their morale.” He said inmates who have maintained good behavior while imprisoned are allowed to make these video calls.

He said family members living in Gaza can always visit inmates on holidays and visiting days, which are Tuesdays and Sundays. He said there are various cultural and social activities to help inmates integrate into the community once they are freed.

He said that those who respond positively to these programs and who maintain good behavior while imprisoned are eligible for some privileges such as vacation time, which allows inmates to spend Thursday and Friday with their families and return to prison on Saturday morning.

A 55-year-old inmate who was sentenced to death for murder and who has been in prison since 1997 told Al-Monitor that he was overjoyed when he was allowed to communicate for the first time in 20 years via Facebook with his wife and children, who live in Egypt.

He said, “After I was imprisoned in 1997 and sentenced to death, my wife and five children left the Gaza Strip because I had no one in Gaza. I have not seen them or heard their voices since then. The other inmates have family visits once or twice a week.”

He added, “It saddened and scared me that I would be executed before I could see them. My dream of seeing them came true after the Interior Ministry and the prison administration allowed us to communicate with our families outside the Gaza Strip on social media, through video calls, and to talk as if we were together in the same place.”

He said he could not distinguish between his children when he saw them. “I was over the moon after hearing from them and learning how life had been treating them over the years,” he said.

Tears of sadness rolled down the cheeks of a 50-year-old prisoner — who was sentenced 25 years to life in prison for taking part in a murder and who had not seen his wife and children in 10 years — when he saw his children via computer. “After I was sentenced, my wife, who is Egyptian, traveled to Egypt with my children to stay with her family. I had not seen or spoken to them since then, but I have always wanted to contact them. My dream came true with the Interior Ministry and the prison administration allowing us to talk with our families via Facebook.”

He added, “I have five children — four daughters and a son. I could not recognize them after all these years. He was a 5-year-old [back then] and he is a young man now.”

He said that at first his wife and children did not believe that he was talking to them online from prison. “I don't think social media for inmates exists everywhere in the world; it allowed us to live our lives as if we were free,” he said.

Al-Monitor spoke with a 40-year-old inmate who has been in detention for 1½ years on charges of murder. “I had not contacted my mother since I was detained. I miss her so much and I was hoping to hear her voice,” he said.

He added, “My wish was fulfilled. I heard her voice and saw her face from inside the Gaza Central Prison. While I could not contact her before, now I can see and talk to her on social media twice or three times a week if necessary.”