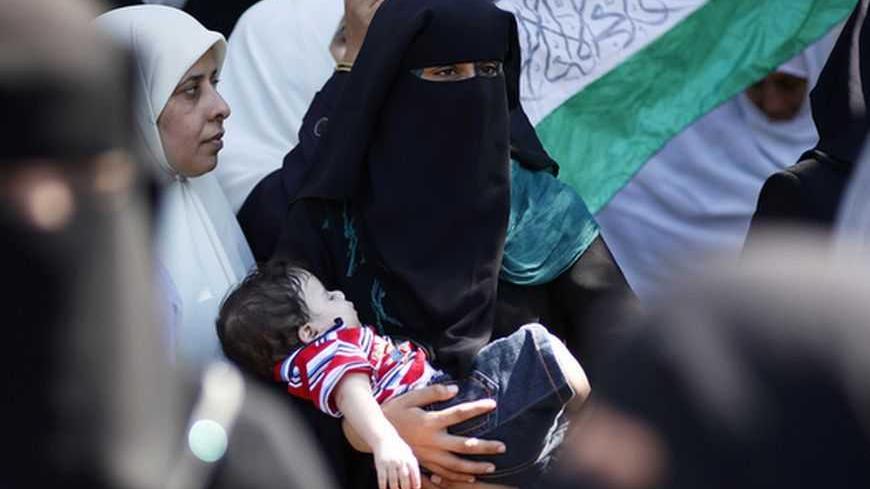 A Palestinian woman holds her son during a protest in Gaza City calling for the release of Palestinian prisoners from Israeli jails Sept. 24, 2012. - REUTERS/Mohammed Salem

In the Specialized Arab Hospital in the city of Nablus, four women stood in front of dozens of local Palestinian and international cameras to announce that they had been impregnated by their husbands via sperm smuggled out of Israeli prisons.

These are the two things the wives have in common, women who differ in age and hail from different cities in the West Bank: They are in the first few months of pregnancy by their imprisoned husbands, who are serving long sentences, and their husbands are affiliated with different Palestinian movements, including Fatah, Hamas and the Popular Front.

"I never expected that I would be able to become pregnant by my imprisoned husband. The occupation forces have banned me from visiting him for six months. I am now two months pregnant, and the doctor informed me that everything is going well," said Salam Nazzal, the wife of Ali Nazzal, who has been imprisoned since 2006 and is serving a 20-year sentence.

Like the other three women, Salam obtained sperm from her husband that had been smuggled out of the prison. For security reasons, all of the women refused to go into any detail regarding the circumstances of the smuggling.

One of the pregnant women, Rimah Silawi, said, "I do not think that the issue of how we acquired the sperm is important; what is important is that we are wives who have become pregnant through artificial insemination. This is what we have come to say today to everyone and to the world at large."

Osama Silawi, Rimah's husband, is serving four life sentences plus 55 additional years. He was detained in 1993 and has three daughters.

This is the second time that the Razan Infertility Center has announced the success of artificial insemination via smuggled sperm. The first time was last year, when in August the center announced the birth of the first test-tube baby of a prisoner named Amer al-Zabin. At the time, the announcement shocked Palestinian society, with Palestinians unsure of whether to believe the news.

Yet the presence of young Muhannad al-Zabin and his mother Dalal at the press conference served as a glimmer of hope for the four pregnant women. He is the "ambassador of freedom and hope" from within Israeli jails, as he is referred to by the families of prisoners.

Razan Center director Salem Abu Khaizaran said, "On Aug. 13, 2012 we celebrated the arrival of Muhannad, the ambassador of freedom from within Israeli jails. In a few months we will celebrate the arrival of four new ambassadors, who will bring joy and hope to the lives of their mothers, and bring a smile to the faces of their fathers inside the occupation prisons."

Abu Khaizaran said, "The Razan Medical Center now has preserved sperm samples from approximately 50 prisoners. We are waiting for some procedures and decisions on the part of the mothers before carrying out artificial-insemination procedures."

While these procedures are typically very expensive, the Razan Center offered to perform them for prisoners pro bono, provided that the prisoner is serving a long term. This is so that these women will not miss the chance to get pregnant and have a child, something that gradually decreases as a woman enters her 30s, according to Abu Khaizaran.

Given the formidable task of smuggling sperm and keeping it from becoming damaged, and given religious and traditional considerations in Palestinian society, these women spent months and years in deep thought before taking this step.

Salam Nazzal said, "I spent two years thinking hard about this. My husband expressed his desire for artificial insemination through his family, who visit him in prison. I was afraid of people's reactions; how would they interpret a prisoner's wife becoming pregnant?”

Salam, wearing a full-face veil, went on, "After a lot of thinking I decided to try. I was very encouraged when I heard about the birth of Muhannad al-Zabin. I talked with my three daughters and they all welcomed the idea. I also talked with my family and they were not opposed.

"I'm not asking for much. I want a son that will carry my husband's name and be a help to his sisters. I know that the pregnancy will be hard, given that two years ago I went back to university to complete my education. However, my family will help me with household affairs," noted Salam in a tired voice.

Dalal al-Zabin, the first wife of a prisoner to become pregnant from smuggled sperm, said, "This was my husband's desire. It took me six years to agree. I consulted clergy, my family, his family and many friends. I can say that today I regret having taken all this time to decide."

Many Palestinian religious scholars, such as Mufti Ikrima Sabri and Hamas leader Hamid Bitawi, issued a fatwa years ago permitting the wives of prisoners to become pregnant through their husband's sperm smuggled out of Israeli jails.

Zabin says with a big smile, "This is a new kind of resistance that reflects a passion for life."

She continues, "When my husband saw his new baby boy Muhannad during my recent visit to the prison, his joy was indescribable. He was crying with joy, and said that the pain of prison was bearable after seeing the sparkle in Muhannad's eyes."

Zabin, who had been in prison since 1997, is serving 26 life sentences plus 25 additional years.

One of the four wives, that of prisoner Rafaat al-Qirwi, was absent from the press conference. Her mother-in-law attended in her place, and couldn't finish a single sentence without wiping her tears.

Rafaat's mother said, "My daughter-in-law did not want to attend the press conference in Nablus. We live in Ramallah and the trip here takes about an hour. I was afraid of any accident that could cause her to miscarry."

She continued, her voice trembling, "I have realized my lifelong dream of seeing Rafaat have a child. I thought I was going to die before I saw the day that his wife became pregnant."

The mother wiped tears of joy mixed with sadness, and said, "When Rafaat married, he was wanted by the occupation forces, and the days he spent with his wife were limited. Seven years ago, he was arrested and sentenced to 15 years. The occupation forces do not allow his wife to visit him."

She continued, "When they first told me about smuggling sperm, I told him that I would do anything to see him have a son before I die. His wife is now 30 years old, and is entitled to have a child, given that she decided to wait for her husband."

She asks angrily, "Why are Rabin's killer and his wife entitled to have children, while our imprisoned sons are denied that right? They are opposed to freedom, and this is criminal in the view of their state. What is this racist law?"

According to Tamara Aslan, an official at the Razan Center, "The wives of prisoners manage to bring samples in a variety of ways. For example, one of them brought a sample in a small packet of table salt after having wrapped it up in clothing, to maintain a high temperature for fear of damage."

She said, "The samples arrive to the center after nearly 12 hours on the road. Some are in good condition whereas others are not, causing these women great sadness."

The families of prisoners coordinate with the Razan Center weeks before the visit. Sometimes they fail to get smuggled sperm, but when they do, they call when they arrive at the nearest checkpoint in any city of the West Bank. There are branches of the Razan Center in these cities, and a team from the center assists them regardless of the time of day.

Samples of sperms are subjected to high standards at the center. Two members of the prisoner's family hand over the sample to the center in the presence of two specialists from the laboratory, so that everyone can confirm that the name of the prisoner and the received date is written on the sample. The center even keeps the packages that the smuggled samples arrive in as a kind of additional documentation.

In regards to the security response that will come about as a result of announcing the successful artificial insemination of wives of prisoners, Abu Khaizaran said, "We recognize that Israeli prisons will resort to more complex and tighter procedures, but this conference is designed to appeal to international human rights organizations to put pressure on Israel to allow the prisoners to give sperm samples to their loved ones in a normal way, or through the international Red Cross. It is not reasonable to deprive hundreds of prisoners of their right to procreate.”

Lydia Rimawi, the wife of Abdul Karim, a prisoner sentenced to 25 years, said: "My husband was arrested 12 years ago and I have one daughter. I know that time is not in my favor if I want to have more children, for I am 35 years old. I want a big family as compensation for being kept apart from my husband for the remaining years of his sentence."

According to Aslan, "We can use these smuggled samples more than once. The laboratory divides up the samples before freezing them, allowing prisoners' wives the chance to undergo artificial insemination more than once."

Dalal al-Zabin concluded by saying, "Whether the occupation wants it or not, we have children conceived through sperm smuggled from our husbands. We will have more children in the future. This is resistance; they cannot try us on our love of life."