A Palestinian family in the Gaza Strip has welcomed the birth of a child born through IVF after the sperm of his father who is detained in Israeli prisons was smuggled. 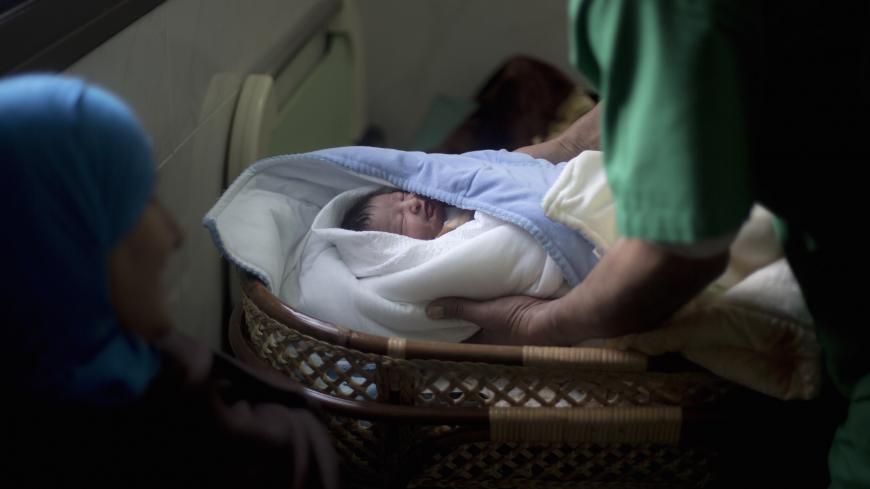 A doctor holds the newborn baby boy of Palestinian mother Hanaa al-Zanen, 26, who had her baby conceived with sperm from her husband smuggled out of an Israeli prison, at a hospital in Gaza City, Gaza Strip, Jan. 11, 2013. - Mahmud Hams/AFP via Getty Images

RAFAH, Gaza Strip — Israeli prisons deprive Palestinian prisoners who are serving long or life sentences of the right to be alone with their wives. For that reason, many of them try to smuggle sperm out of prison to their wives to be used in in vitro fertilization (IVF). Wife of prisoner Mohammad al-Qedra, 35, who has been detained since the 2014 Israeli war on the Gaza Strip, gave birth in February using her husband’s sperm that was smuggled out of prison about nine months ago.

The Israeli army arrested Qedra in east Khan Yunis during the ground invasion of the 2014 war that lasted for 54 days. He was sentenced to 11 years in prison, of which he has already served seven. His family has been banned from visiting him for four years.

The Qedra family in al-Amal neighborhood in the west of Khan Yunis rejoiced at the news of the child’s birth, although the IVF conception was not welcomed by everyone at first. Qedra’s wife, Umm Mujahed, 32, told Al-Monitor, “We live in a conservative society and some of the family members objected to the idea while others supported it. The decision was ultimately my husband’s who agreed.”

She said, “But everyone is happy now, and they were all by my side when I gave birth at the hospital.”

Although Umm Mujahed has not seen her husband for four years, she relayed the idea of using his sperm to him through visitors who acted as intermediaries in Israeli prisons. She wanted to convince him of having another child, upon the request of her three daughters whom she conceived before her husband was arrested. The eldest is eight.

“We wanted a boy to keep us company, and fate has fulfilled our wish,” she said.

The challenge for the family was finding someone to smuggle the sperm from the prisoner in Israel to Gaza. The last attempt succeeded after a series of failures over the years. In previous attempts, some individuals whom Israel allowed to visit their children in Israeli prisons would bring the sperm with them upon their return, but due to the Israeli checkpoints and the time wasted, the smuggled sperm would be unusable.

She said, “My husband tried to smuggle the sperm three times, but the medical procedures failed. But finally a former prisoner brought with him the smuggled sperm directly to the fertility center in Gaza. Two weeks later I underwent the procedure.”

IVF is a way to treat infertility and difficulty in conceiving. In this process, mature eggs are collected, and they are fertilized with sperm in the laboratory. The fertilized egg is then implanted in the uterus. Sperm can live for up to two days under the right circumstances before it needs to be frozen for use in the fertilization process. Sometimes the sperm does not arrive in good condition and the fertilization process fails. Then, the couple has to repeat the sperm smuggling process.

Abdul Nasser Ferwana, director of the Census Department of the Commission of Detainees and Ex-Detainees’ Affairs and a member of the committee tasked with managing its affairs in the Gaza Strip, told Al-Monitor, “The Palestinian detainees and their families are resorting to conception through smuggled sperm as they fear they could remain locked up. The idea began with the detainees having long sentences.”

In 2014, the first child was born from smuggled sperm in Gaza; he is the son of former detainee Tamer al-Zaanin who was arrested in 2006 only three months after his marriage. Zaanin was released in 2018.

In recent years, the smuggling of semen has increased. According to Ferwana, Qedra’s case is the first child to be born from smuggled sperm in 2021. In 2020, eight detainees succeeded in smuggling sperm and their wives brought nine kids into the world, including twins. The total number of detainees who have succeeded in this process has reached 68 since 2012, and their wives conceived 96 children. Palestinians call these children “ambassadors of freedom” because they constitute a link between the detainee in Israeli prisons and his family, Ferwana added.

The first person who came up with the idea of smuggling or retaining sperm was Abbas al-Sayed who was sentenced to 35 years and an additional 100 years, and was wanted by Israel in the West Bank. He thought of keeping his sperm at the Razan Center for Infertility in Nablus. But religious, political and social debates prevented him from doing so, until finally a fatwa was pronounced in this regard. The idea was endorsed politically by Palestinian factions, mainly late President Yasser Arafat and former Hamas leader Abdul Aziz al-Rantissi. When Sayed was arrested, he wanted to benefit from the semen sample in 2003, but the IVF procedure failed. The smuggling of semen from Israel began.

Mohanad al-Zaben was the first Palestinian child born through smuggled semen in 2012. His father, Ammar al-Zaben, is serving a sentence of 27 years on charges of being affiliated with Izz ad-Din al-Qassam Brigades, Hamas’ military wing.

Wife of detainee Ahmed al-Maghribi from the West Bank had twins — Sindoss and Nour — who were conceived through IVF via semen smuggled from her husband in 2013, who has been serving 18 life sentences since 2002.

Ferwana concluded, “The supportive religious fatwas played a role in promoting social approval of the concept [of smuggling semen]. Palestinian detainees have to serve unreasonably long sentences that sometimes reach 99 years, which is why they seek ways to conceive offspring. A plastic lighter, a bag of chips or the cover of a piece of chocolate can be used to carry the smuggled sperm.”