Contrary to widespread medical procedures designed to help women get pregnant, the sperm donation procedure is controversial among Israeli heterosexual couples, be it for psychological or religious reasons. 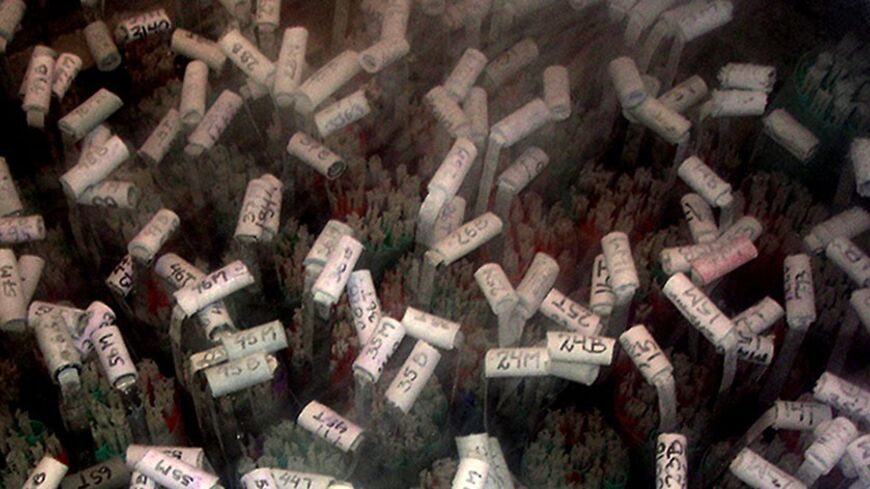 Vials of sperm are frozen at a sperm bank in Aarhus, Denmark, March 12, 2007. - ALLAGUI/AFP/Getty Images

“And God created man in His image, in the image of God He created him; male and female He created them. God blessed them and God said to them: ‘Be fertile and increase, fill the earth’” (Genesis 1:27-28).

The night before his former spouse underwent artificial insemination by donor, Gil Kidron went to the sperm bank where he received a closed container (“like a container of uranium,” he jokes) in which was a unit of sperm from another man. Kidron didn’t know the man’s name, and in fact knew very little about the donor. This donor would become the biological father of Kidron’s daughter. Kidron, who wrote a Hebrew-language book on the issue titled ''The Sperm of Calamity," traveled home with the sperm-filled container resting on the seat next to him. He went to sleep with the container next to his bed, and the next morning he brought it to the hospital for the procedure. This is the somewhat slipshod way in which Israel’s health establishment carries out a most sensitive, silenced medical procedure.

This is no coincidence. Donor insemination in Israel is still a quasi-covert process despite the fact that “it is no longer the way it was in the 1970s and 1980s, when it was totally uncontrolled,” says professor Daphna Birenbaum-Carmeli, a sociologist affiliated with Haifa University’s nursing school. “At that time, a donor would come to one room and a sterile couple to another, and the container with sperm would be transferred from one room to the other. Sometimes this was done without any record keeping,” she says. In those years, rumors were rampant that most of the donors were medical students and even the attending physicians themselves.

This might have inspired Milan Kundera's hero, gynecologist Skreta, in The Farewell Waltz (in Czech), who used his own sperm to help couples overcome their infertility problems. Despite all the rumors in Israel, no one conducted any kind of supervision over the process.

“The lack of record keeping and the disorganized proceedings — all that was intentional,” contends Dr. Ruth Zafran of the Interdisciplinary Institute (IDC) in Herzliya. “Stories even circulated that they mixed sperm from all kinds of donors to guard donor anonymity and protect fathers who preferred not to know. There was also a third theory, a bit conspiratorial, according to which the medical guild protected itself to prevent any future discovery that most of the donors were the physicians themselves.”

“The AIDS outbreak in the mid-1980s put an end to all that. The Health Ministry issued a regulation that fresh sperm must be frozen, then the donor must be checked again after six months [for AIDS],” explains Birenbaum-Carmeli. But even today, there is no institutional supervision over sperm donation in Israel. It is a simple medical procedure performed under a cloak of secrecy, in which the State of Israel almost does not involve itself.

“There is no national center that gathers information about the donors and the children born from their sperm,” says Dr. David Yishai, director of the sperm bank in Haifa’s Carmel Hospital. “Each unit has its own lists, but these are internal records only.”

According to the Health Ministry, 15 licensed sperm banks operate in Israel (as of February 2014). Most are under public ownership, such as hospitals, while a minority are run privately. Since there is no exact record of the medical process, there is also no exact information about the number of children born via this method in Israel every year. Experts involved in this sphere estimate that a few hundred children are conceived this way each year.

The initial goal for establishing sperm banks was to assist heterosexual couples in which the man was sterile. In the early years, almost 100% of donor sperm recipients were such couples. But things changed in the course of the 1990s. “As aforesaid, the AIDS epidemic burst on the scene in the mid-1980s,” explains Birenbaum-Carmeli, “and simultaneously, insemination techniques progressed and improved greatly. That put the death knell on sperm donations for heterosexual men. In the past, hundreds of thousands of active sperm were needed to inseminate an egg, but today only a few isolated sperm are needed to do so. Thus, even from an almost-sterile male it is possible to produce enough sperm to inseminate his wife.”

The pundits estimate that today, about 85% of sperm bank clients are single women or lesbian couples, while only 15% are heterosexual couples.

In Israel, heterosexual couples will almost always prefer to undergo long, difficult and painful fertility treatments, exhausting any possible procedure, to produce a child carrying the joint genetic load of husband and wife. They will only consider sperm donation when it becomes absolutely clear that the man's sperm is not viable. Even under these circumstances of absolute sterility, most men will prefer adoption over inseminating the womb of their partner with semen from another man.

“Donor insemination is viewed as a last resort alternative, not as a real solution,” explains Birenbaum-Carmeli. “In Israel, there is an obsession over the genetic connection. Expensive fertility treatments are viewed as trivial and the state participates in carrying the costs, only so that the child will have a genetic connection to both parents. By contrast, parents are forced to pay for donor insemination. No other country operates this way.”

Recent decades have witnessed an uptrend in cases of in vitro fertilization in Israel. According to Health Ministry statistics, the number of IVF treatment cycles in 2011 rose to 38,284, in comparison to 34,538 cycles 2010 (an increase of 11%). New Health Ministry directives, publicized in January 2014, propose that health services provide fertility treatments to women up until the age of 45 free of charge, as in the past — but limit the number of treatments to eight, in contrast to the unlimited number formerly given.

There are many reasons for the genetics obsession. For example, the ego of the Israeli male (which is no different than that of other men around the world) finds it difficult to face the idea of his partner being inseminated with semen from another man. To them, it's a kind of inner confession that they do not fulfill their roles as males. In addition, the Jewish religion sanctifies the Jewish genetic connection of thousands of years, including the myth of the Jewish "smart" gene, and there are stringent religious rules that determine "who is a Jew."

This is one of the reasons that the process is shrouded in secrecy. Experts note that religious institutions have been trying for many years to gain access to the database of donors and children born from their semen, while the physicians do everything to block this, even at the price of unorganized — and thus unrecorded — procedures. The religious establishment wants to know exactly who was born and from whose semen, mainly to avoid mamzerut (illegitimate child). According to the Jewish law, mamzerut includes a child born of incest, or the child of a married woman and another man. This status of mamzerut is also heritable; the progeny of a mamzer mother or father is also a mamzer. In Israel, a mamzer can only marry another mamzer or a convert.

Ironically, Israeli ultra-Orthodox couples in which the man is sterile do use donor insemination, but they are careful to acquire sperm from a non-Jew abroad. The Jewish woman’s womb is an "instrument of religious conversion" — when a Jewish woman carries a fetus in her womb, the offspring will be Jewish even if the biological father is a non-Jew.

This secrecy is also the result of a masculine need to hide what is viewed as a fundamental, essential defect in "masculinity." "Sterility is automatically linked to impotence,” says Birenbaum-Carmeli, “therefore, you hardly ever hear about sterile men in Israel, only about women undergoing fertility treatments. Almost always, it is the woman who assumes the 'fault' of infertility, at least to the outside world — despite the fact that 50% of fertility problems are connected to male functioning.”

The secrecy of the process is attributed to the severe shortage of sperm donations. “From year to year, it gets harder to find donors,” explains Yishai. His sperm bank has only a single-digit number of donors, a situation that evidently typifies other sperm banks in Israel.

Birenbaum-Carmeli has another theory. “In the past, infertility was a problem of men. The donor solved the problem of another man, so he felt like an alpha male winning a competition against another male. Now it’s a problem of single women and lesbians; thus, no longer a struggle between two males. The alpha male has turned into a service bull [inseminating numerous women], and that is a lot less attractive to potential donors.”