Don’t expect the Egyptian regime to forgive or forget the serious crimes of Muslim Brotherhood leaders, but there may be some hope for youthful offenders. 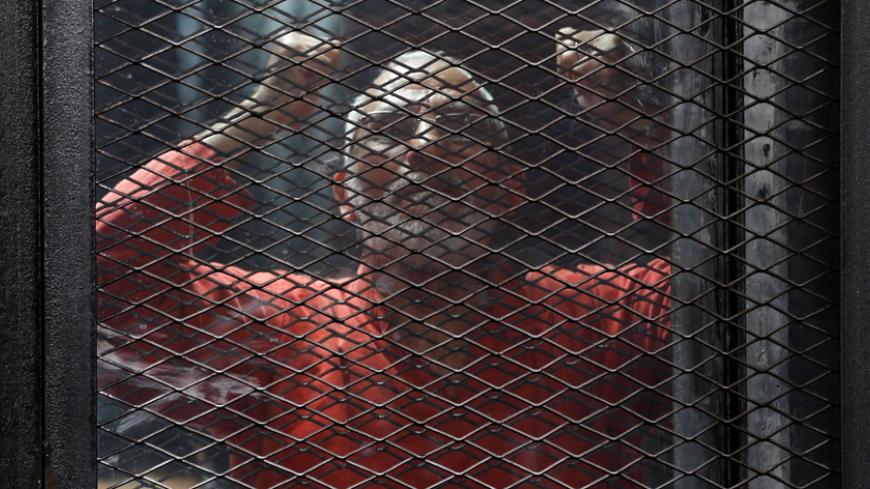 Muslim Brotherhood leader Mohamed Badie shouts slogans against the Interior Ministry from behind bars during the trial of 738 Brotherhood members for their armed sit-in at Rabia al-Adawiya Square, at a court on the outskirts of Cairo, May 31, 2016. On Oct. 26, an appeals court upheld a 25-year prison sentence for Badie for blocking an agricultural road. - REUTERS

Dealing with facts is the only way to make logical predictions, and the facts do not favor a reconciliation between the Egyptian regime and the outlawed Muslim Brotherhood.

Since the ouster of Egyptian President Mohammed Morsi in 2013, the facts have never pointed toward a potential compromise between the Brotherhood and the governments since then: the transitional regime that was led by President Adly Mansour, the head of the Supreme Constitutional Court, or the current regime headed by President Abdel Fattah al-Sisi, elected in 2014.

In fact, all the evidence points to the contrary. A get-together hardly seems to be on the political horizon when one considers all the reports compiled against Brotherhood leaders; their persecution; the “dispersal” at Rabia al-Adawiya Square in August 2013 — sometimes called Egypt’s Tiananmen Square; the continuing crackdown on the Brotherhood’s funds and companies; and the sentences issued against members.

The government’s Oct. 4 slaying of Brotherhood official Mohamed Kamal forced observers and analysts to seek real answers to citizens’ questions about how serious reconciliation attempts are.

They didn’t have to wait long for input.

Egypt’s Court of Cassation on Oct. 22 rejected an appeal of 20-year sentences against Morsi and some Brotherhood leaders in a case known as the Ittihadiya clashes. They had been found guilty of inciting violence that led to the death of 10 people in 2012 and of detaining and torturing protesters. The ruling was final and cannot be appealed.

On Oct. 26, the court upheld the 25-year prison sentences of Mohamed Badie, the supreme guide of the Muslim Brotherhood, and 36 other leaders and members for their roles in blocking the agricultural road of Qalyoub, which was considered a terrorist crime. This ruling also was final and cannot be further appealed.

Every time politicians propose a reconciliation initiative between the Brotherhood and the state, the Brotherhood insists that Morsi be returned to power as the “legitimate” president. The demand is not realistic and it may even be stranger than fiction.

On the other hand, public and political figures have been focusing on getting the jailed leaders and young members of the Muslim Brotherhood released. That demand, especially regarding the leaders, has become harder since the final appeals have been ruled on.

Sisi mentioned the questions regarding reconciliation with the Muslim Brotherhood when he participated in the first round of the National Youth Conference in Sharm el-Sheikh on Oct. 27. “The decision to reconcile with the Brotherhood is not mine alone to make, as it is also a decision for the state,” Sisi said.

Yousry El-Ezbawy, a researcher at Al-Ahram Center for Political and Strategic Studies, told Al-Monitor, “The word 'state' includes the political regime represented by a president, government, house of representatives, judiciary and the people. It is impossible for a political regime to interfere by pressuring the judiciary to amend provisions that were issued indicting leaders of the Brotherhood or indicting the Brotherhood itself as a terrorist organization.”

He said that even if the current regime actively sought to reconcile with the Brotherhood, it would not be able to as long as there were judicial sentences in place that cannot be further appealed.

Samir Ghattass, a lawmaker and the head of the Middle East Center for Strategic Studies, told Al-Monitor, “If we find that someone was not involved in a crime, they can practice their life activities normally — including political ones — but not under the title of the Brotherhood, a terrorist organization under the law. Therefore, the word [reconciliation] does not exist, as the state does not reconcile with terrorism or those indicted by the judiciary.”

Ghattass posed the rhetorical question, “Could the state reconcile with [the Islamic State]?”

Ezbawy did hold out a bit of hope, based on specific situations and a flexible definition of “reconciliation.” If reconciliation means releasing young people who are thought to have participated in protests organized by the Brotherhood, “this is possible to discuss, as Sisi can pardon them on certain occasions,” he said.

He added, “Moreover, Sisi could interfere using his constitutional right to reduce sentences issued against some leaders for considerations of age or illness.” Such considerations can be made for all prisoners, without a political basis.

Also at the youth conference, Sisi pledged to form a committee from among the conference youths to look into the cases of children remanded into custody in which no criminal sentences have been issued. He promised that the committee’s reports would be considered in the release process.