A series of assassinations and assassination attempts have been targeting Egypt’s security forces and were claimed by the newly established Hasm movement, which calls for the fall of Abdel Fattah al-Sisi’s regime. 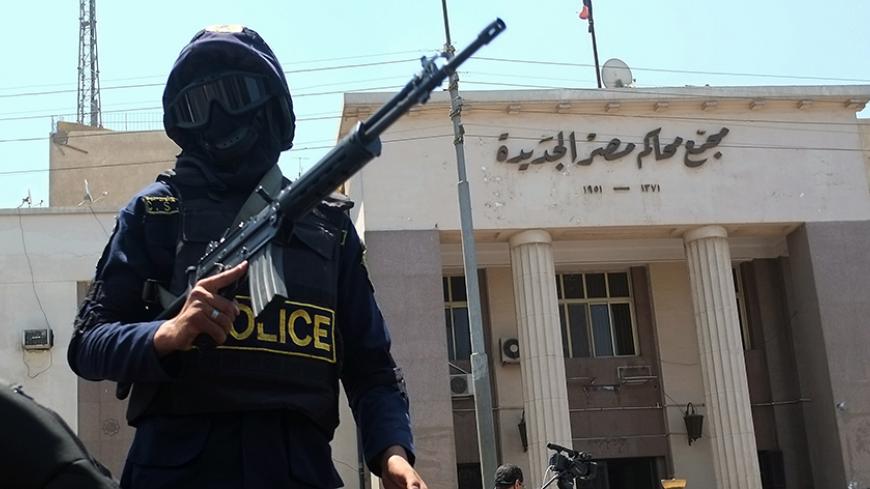 Egyptian special police forces secure the area outside a courthouse after a makeshift bomb placed under a car exploded, wounding a woman in Cairo, June 25, 2014. - KHALED DESOUKI/AFP/Getty Images

CAIRO — On Dec. 19, the Egyptian Ministry of Interior announced the death of Mohammed Ashour Dashisha, one of the Hasm movement’s most dangerous members, after an exchange of fire with the police in a residential neighborhood in 6th of October City.

The ministry said in an official statement that Dashisha had been using an apartment there along with a number of Hasm members to hold meetings and manufacture explosive devices to be used in a series of hostile operations against the army, the police and the judiciary. Once the security forces got close to the apartment, Dashisha opened fire on the troops who fired back and killed him, while a soldier was shot dead as well, according to the statement.

Following this incident, the Hasm movement declared a new phase, which it dubbed “jihad and resistance," against President Abdel Fattah al-Sisi’s regime. This raises several questions about the future of this movement, its financiers and backers, as well as the extent of its affiliation with the Muslim Brotherhood.

On July 16, the Egyptian Ministry of Interior announced the assassination of Maj. Mahmoud Abdel Hamid, the head of investigations at the Tamiya police station in Fayoum governorate. Three masked men on a motorcycle opened fire at a police car, killing Abdel Hamid and wounding two policemen.

This attack marked the beginning of a new movement targeting policemen, soldiers and state figures, which has become known as “Hasm” (Arabic for "elimination").

On the evening of July 16, the Hasm movement issued an official statement titled "Military Statement I," in which it said, “Hasm claims responsibility for the assassination of Maj. Mahmoud Abdel Hamid, the head of investigations in Tamiya, Fayoum. Our attack also wounded two of his men, who are currently in critical condition; one is a police officer and the other is a cadet. This was a punishment for the crimes and violations they committed while operating under this system,” in reference to Sisi’s regime.

The statement continued, “We vow before God and the Egyptian people not to drop our weapons until our great people are liberated from the oppression of the military machine and its treacherous militias. We will not stop until the last member of our movement is dead. We will only leave the battlefield either as victors or martyrs.”

Thus began the movement’s terrorist operations, and a few weeks later, on Aug. 5, it claimed responsibility for an operation that targeted former Grand Mufti Ali Gomaa, as he was entering a mosque for Friday prayers in 6th of October City. However, the assassination attempt failed and Gomaa survived the attack.

The Hasm movement issued a statement on the same day that read, “We have targeted the mufti and his guards and succeeded in only injuring the guards in an ambush. However, civilians were present at the scene and the [mufti] was rushed into the mosque, preventing his assassination, but he will not survive the next attack,” insinuating the continuation of the violent targeting of the state and its institutions.

In response to the failed attempt, the security forces announced Aug. 14 that it had identified and arrested individuals responsible for the attack, noting that they were affiliated with a terrorist cell from Hasm involved in many incidents. The security forces said that these individuals had been trained in desert areas on how to use weapons and have made a list of a number of public figures and security leaders to target in the near future, with the help and support of Muslim Brotherhood leaders.

However, this security crackdown was not enough to stop the Hasm movement. A few days later, it carried out successive attacks, including the targeting of the police club in Damietta on Sept. 4, injuring Col. Moataz Salama, the head of the explosives department, along with five others. In addition, on Sept. 30, the convoy of Assistant Attorney General Zakaria Abdul Aziz was targeted by a rigged car in the First Settlement area — but it was a failed attempt.

The most recent terrorist attack was carried out by Hasm on Dec. 9, when it used an explosive device to target a security site affiliated with the Interior Ministry on Haram Street in Giza governorate, killing six policemen and wounding three others.

In this context, Sameh Eid, an independent researcher on Islamic movements, who was previously associated with the Brotherhood, told Al-Monitor, “Hasm is one of many movements and groups that were formed following the August 2013 Rabia al-Adawiya Square massacre, which resulted in the death and arrest of many. The members of these movements are youth who escaped the massacre or who were arrested and were released after serving their sentences. They gathered and formed these groups to take revenge from the current regime.”

On Aug. 13, 2013, Egyptian security services raided the protests organized by supporters of former President Mohammed Morsi who were calling for the return of the Muslim Brotherhood, which was ousted following protests on June 30, 2013.

Eid said, “There are many signs to confirm that this movement was inexperienced and is not part of the Brotherhood, but only emerged after the August 2013 Rabia al-Adawiya massacre. First, when the security services announced the death of the Hasm member on Dec. 19, it said he was 25 years old, which means that the movement’s leaders are young — which is not the case within the Brotherhood. Second, the movement first emerged in Fayoum governorate, which is one of the provinces that lost many of its residents during the August 2013 Rabia al-Adawiya massacre. Finally, the movement never used heavy machine guns in its operations; it relied on primitive weapons and failed to kill the assistant attorney general as well as the former grand mufti, which shows a lack of experience. Thus, the movement and the Brotherhood are not affiliated, although the Brotherhood blesses and welcomes such terrorist attacks targeting the current regime.”

Eid ruled out the possibility of violent attacks and armed confrontations between the movement and the security forces coming to an end soon, even if the state and the Muslim Brotherhood reach reconciliation. He said, “This generation is rebellious and does not obey the regime. It has its own line of extremist thought against the state, and thus I believe this wave of confrontations could last for years and years. The only way it could stop is if the state starts adopting new methods to keep youth away from extremist ideologies, changes the strategy with which it deals with these movements and stops relying on armed confrontations.”

For his part, Maj. Gen. Farouk al-Megrahi, a former Interior Ministry assistant, told Al-Monitor that Hasm is one of the Muslim Brotherhood’s wings, trying to create chaos and turmoil in the country following the fall of the Brotherhood regime, especially since no one had even heard of this movement during the Brotherhood's rule.

He said that Hasm and other similar movements receive financial support from the Brotherhood, while Qatar and Turkey significantly contribute in financing the Brotherhood in order to spread chaos within the community, reveal the weakness of the current regime to the world and expose its inability to cope with terrorism.

He added, “We will not surrender to terrorism and we will eliminate it no matter how much time it takes.”