Who's behind assassination attempt on former Egyptian mufti?

Egypt may not have enough evidence to accuse Turkey for the assassination attempt on former Grand Mufti Ali Gomaa, but they have enough to inflame tensions between the two countries. 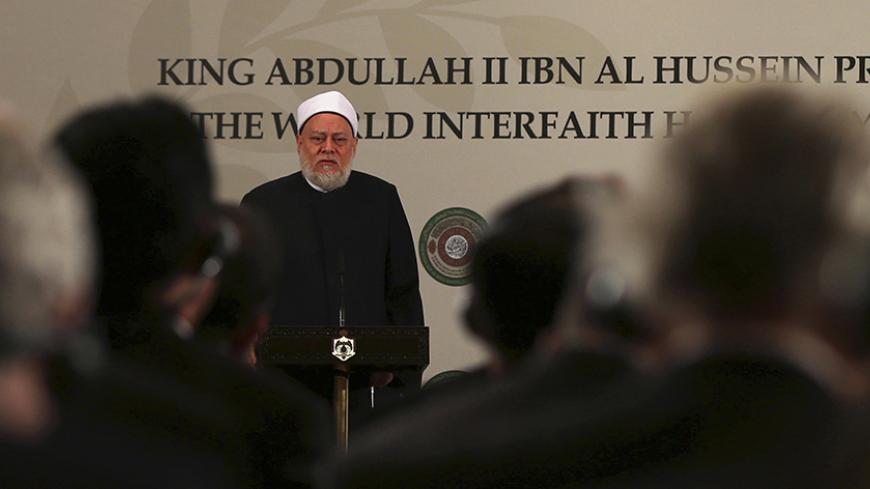 On Aug. 4, the day before an assassination attempt on Egypt's former Grand Mufti Ali Gomaa, four Turkish intelligence officers infiltrated the Sinai Peninsula and were arrested by Egyptian security forces. Several hours before the assassination attempt, the Huffington Post Arabi website, which is headquartered in Istanbul, published segments of an extended interview with Mehmet Gormez, the head of Turkey's Religious Affairs Directorate, concerning the ties between Gomaa and the Fethullah Gulen movement. Turkish authorities have accused the latter of being responsible for the failed coup against the government in July.

Is this evidence enough to point accusing fingers in Ankara’s direction for the assassination attempt?

It all started Aug. 5, when Gomaa headed to a mosque for Friday prayer. A number of armed men fired shots at him. After Gomaa escaped, the Hasm movement claimed responsibility for the operation through their official accounts on Facebook and Twitter.

The Hasm movement’s official social media pages were launched over a year and a half ago. They have been active against the Muslim Brotherhood opposition, but for most of that time, all their activity was conducted online. Perhaps for that reason the pages were never closed. However, they reportedly launched their first terrorist operation in July, claiming responsibility for an assassination attempt targeting the chief investigator at the Tamiya police station in Fayoum. The operation was carried out in the same style as the attempted assassination of Gomaa: a burst of gunfire directed at the target.

Maj. Gen. Ashraf Amin, a retired deputy minister of the interior and a security expert, told Al-Monitor he believes the operation was linked to the Muslim Brotherhood and that the Hasm movement is actually one of their so-called qualitative committees. Amin said the assassination operations claimed by Hasm were similar in style to other attacks carried out by the Brotherhood’s qualitative committees. Among those, for example, was the infamous case of the assassination of Wael Tahoun, the former chief investigator of the Matareya police department, in April 2015. Their operations, according to Amin, have generally targeted men from the investigations bureau for their prominent role in liquidating these qualitative committees.

When asked about the likelihood that other organizations were involved in Gomaa’s attempted assassination, Amin did not rule it out. “We cannot just accept the claim of responsibility for the operation by some terrorist group or another. There are investigations and inquiries [that must be conducted]. And perhaps that movement was attempting to draw the notice of the police away from other movements. And so the investigation must run its course, especially since it is highly unusual for a movement to claim responsibility for a failed attack, such as the one directed against Ali Gomaa.”

Abd al-Hamid Khayrat, the former deputy chief investigator of State Security, in a social media post on his personal Facebook account, ascribed the assassination attempt on Gomaa’s life to Ansar Bayt al-Maqdis in response to the Egyptian army’s assassination of their leader Abu Du’a al-Ansari in early August. He added that he expects that their operations will extend beyond the border of Sinai, since the armed forces have placed their home base in Sinai under a tight siege.

In statements to Al-Monitor, Khalid Mutawi, a retired brigadier general and security expert, dismissed the possibility that there could be a direct relationship between Ansar Bayt al-Maqdis and the attempted assassination. In his assessment, all those organizations are in contact and coordination with one another. However, as he put it, “What we’re talking about here is the direct perpetrator, and the assassination attempt indicates that the elements that carried out the attack don’t enjoy the same level of training that Ansar Bayt al-Maqdis does. That much is evident from the amount of ammunition they wasted and from their failure to assassinate their target, even though he was clearly visible. Moreover, he was targeted with small arms, which Ansar Bayt al-Maqdis is not particularly known for. They prefer to employ remote-detonated explosives most of the time.”

Mutawi added, “One cannot ignore the evidence pertaining to what the head of Turkey’s Department of Religious Affairs [Gormez] said about Gomaa’s relationship with Fethullah Gulen, and the four Turkish intelligence officers who snuck in [to Sinai] a day before. Therefore, the investigations should not neglect the possibility that entities outside Egypt were involved.” Mutawi did not name any entities or openly accuse any state, however.

Retired Col. Khaled Okasha, the director of the National Center for Security Studies, agrees with Mutawi on this point. He believes that the evidence of four Turkish intelligence officers infiltrating Egypt should not be ignored. And then there are Gormez’s remarks about Gomaa as well as the state of agitation felt by some Turkish agencies toward the Gulen movement and anyone suspected of having a relationship with it.

In addition to all this, Okasha said that one cannot ignore the concentration of many Brotherhood leaders inside Turkey or the fact that they are in indirect communication with their cells in Egypt. This is increasingly important to note given the high probability that the Hasm movement belongs to the Brotherhood’s qualitative committees, according to Okasha, “particularly since the Brotherhood has absolutely declared war on the Gulen movement and all who support it, following the lead of Turkish President Recep Tayyip Erdogan, who declared war on the movement. Gomaa would be considered a good catch, especially since he is an old enemy of the Brotherhood and, perhaps, the Turkish authorities now consider him an enemy of theirs, given his communications with the Gulen movement.”

Al-Monitor attempted to communicate with Brig. Gen. Khalid Fawzi, the official responsible for handling public and media relations in the Egyptian Ministry of the Interior, to learn about the latest developments concerning the investigation on the attempted assassination of Gomaa, the investigation of the Turkish intelligence officers detained in Sinai, as well as the likelihood that the two events are related. However, as of the time of this writing, he had not returned our calls.

The state of near-permanent tension between Egypt and Turkey since the ouster of former President Mohammed Morsi in July 2013 has continually raised doubts. These incidents, whereby four Turkish intelligence officers infiltrated Egypt and the head of Turkey’s Religious Affairs remarking on Gomaa’s ties to Gulen only hours before an attempted assassination, have only served to magnify those doubts. However, by themselves, these pieces of evidence do not prove anything, nor do they rise to the level of concrete evidence. However, it is probable that they rise to the level of opening the door to yet further inflamed tensions between the two countries. The two sides may even reach a point where the only way they can express further irritation is to embark on a complete and total break in relations.