What’s next for Egypt’s IS affiliate after killing of leader?

After the Egyptian military announced Aug. 4 that the head of the Sinai branch of the Islamic State was killed in a series of airstrikes, observers are split over what comes next for the group. 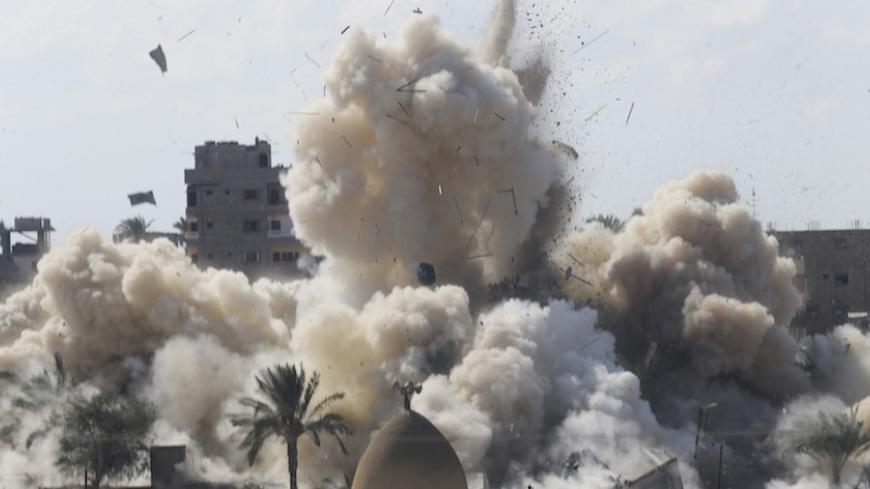 Smoke rises after a house was blown up during a military operation by Egyptian security forces in the Egyptian city of Rafah, Oct. 29, 2014. At least 33 Egyptian security personnel were killed the previous week in the Sinai Peninsula bordering Israel and Gaza, in an attack on a checkpoint that bore the hallmarks of assaults claimed by Egypt's most active militant group, Ansar Bayt al-Maqdis. - REUTERS/Ibraheem Abu Mustafa

Abu Du’a al-Ansari — the reported head of the Islamic State’s (IS) affiliate in the Sinai Peninsula — has been killed in an airstrike, an Egypt official said. Brig. Gen. Muhammad Samir, the official spokesman of Egypt's armed forces, described Ansari on Aug. 4 as “the leader of the [Ansar] Bayt al-Maqdis organization.”

A number of his deputies were also killed in the strike, Samir said. The Egyptian army stressed that numerous scenarios were being contemplated concerning the future of the organization, also known as Wilayat Sinai, in the wake of its leader’s killing and amid speculation as to who might replace him as the group’s next head.

Najeh Ibrahim, a former leader of Gamaa Islamiya and a researcher specializing in Islamist movements, told Al-Monitor, “Any discussion of Ansar Bayt al-Maqdis’ future following the death of its leader should follow discussion of the various stages of the group’s founding and development. The organization is rooted in desert, borderland environments. It began in 2003, founded by a dentist known as Khalid bin Masa’id, with the help of Usama al-Mahlawi and Nasr Khamis al-Mallah. The military [leaders were] Salim al-Shanub and Hani Abu Shitah. They are the leaders who headed the organization in its initial stages, when it was known as the 'Tawhid Wal-Jihad' organization. It adopted the ideology of al-Qaeda, but was not [organizationally] affiliated with it. The group’s goal was to target Israelis and Egyptian policemen in Sinai. The group carried out several bombings of Sharm el-Sheikh, but most of the leaders were executed, with the exceptions of Hani Abu Shitah and Hamdin Abu Faysal, who were imprisoned with me at the time. In prison the two of them attended my lectures [outlining] a reassessment of jihadi ideology and, in fact, adhered to that ideological reassessment [themselves].”

Ibrahim said that in 2005, security forces succeeded in taking control of the group and killing most of its leaders. “They assaulted Jabal al-Hallal, which was the group’s redoubt, but the state was unable to generate any development [of education, infrastructure, etc.] in Sinai.”

And thus the group embarked on its second stage, which began after the events of Jan. 25, 2011. “In the aftermath of former President Muhammad Hosni Mubarak’s ouster,” Ibrahim said, “leaders and members of [Ansar Bayt al-Maqdis] escaped prison. However, before they fled, they met with an individual known as Magdi al-Safti, who belonged to the Al-Nagun Min an-Nar Organization. Most remained there for three years, spreading extremist takfiri ideology among one another to their hearts' content. The prison administration did not take much interest, because it did not expect that these leaders would escape. In the second phase of the group’s history, the state experienced a security vacuum and the organization’s leaders, after making their escape from prison, succeeded in occupying three villages in Sinai.”

It was in these villages that they openly set up camps for their organization, which had been designed to provide advanced training to their recruits. Ibrahim said the leaders were joined by a number of military experts and university graduates, which enabled them to make a qualitative leap in terms of the group’s culture and capabilities.

“Members of the organization exploited the chaos that then afflicted the border areas in order to train many of their members in Gaza and Syria. During that phase, the group swore an oath of allegiance to Ayman al-Zawahri, the leader of al-Qaeda, and the group underwent a name change to become Ansar Bayt al-Maqdis, the very name used by a group that provided them with training in Gaza. The group then directed a number of strikes at the police department in el-Arish and raised the flag of al-Qaeda over the police headquarters. The group was in constant contact with [Ayman] Muhammad al-Zawahri, and their goal shifted toward a collision with the Egyptian army.”

Ibrahim concluded by noting that “the organization waged a number of attacks on the Egyptian army in its third phase.”

These attacks, according to him, were the first Rafah operation, which witnessed the killing of soldiers in the month of Ramadan during the presidency of Mohammed Morsi.

“The organization had decided that Morsi was an infidel, but did not announce this publicly. The group succeeded in shooting down army planes. ... This inaugurated the group’s third phase, which coincided with the demonstrations on June 30, 2013, that resulted in the ouster of former President Mohammed Morsi. The group announced it was now affiliated with IS, whose star was rising, even as al-Qaeda was in decline.”

Ibrahim clarified that “the third stage witnessed violent clashes against the army, and many young men joined the organization from the Hazemun movement, so that the organization was able to use advanced weaponry. It was also joined by drug smugglers fleeing the police and a number of criminals who feared persecution by the security forces.”

Concerning the truth about the figure of Abu Du’a al-Ansari, Ibrahim said, “During the third phase the group was led by Muhammad Farih Ziyadah. His name within the movement was Abu Du’a al-Ansari. His brother was Tawfiq Freij Ziyadah [who was known within the group as Abu Mus’ab] and he was killed. His deputies were Hamdin Abu Faysal and Hani Abu Shitah. The likely candidate to assume leadership of the group is Hani Abu Shitah.”

Regarding the impact on the organization of its leader’s death, Ibrahim said, “The death of group leaders has a negative impact, because jihadi organizations don’t depend upon institutions, and the role of a central leader is to know the sources of armaments and funding. They cannot share that information with everyone [in the organization].”

Ibrahim said that Abu Shitah is noteworthy for not being a particularly bloody-minded individual, in comparison with his companions. “However, the ideological evolution that took place among jihadis after the demonstrations of Jan. 25 has made it difficult to analyze Abu Shitah’s personality, especially since most of the members of his family are also jihadis,” he added.

Ibrahim stressed that the killing of Ansari reflects a major success for the army in terms of penetrating the organization and obtaining extremely sensitive information about the leadership’s secret locations.

Meanwhile, Kamal Habib, a former jihadi and researcher specializing in Islamist movements, told Al-Monitor, “The organization has suffered a decline of late. [Most of] its operations are now individual assassinations, because IS has weakened in Mosul and in Syria, in addition to the acuity of military strikes against the group in Egypt.”

Nabil Na’im, also a former jihadi, denied in statements to Al-Monitor that Bayt al-Maqdis would be greatly affected by the death of Ansari. He stressed, “The organization will not collapse if its leaders or commanders are killed, for they all possess deputies and a clear [succession] arrangement for scenarios following the leader’s death: One of the deputies is promoted to leadership of the organization following his predecessor’s death, and he is [generally] a figure well-known to group members. [These plans are laid out in advance] out of fear that internal strife and struggles could break out over who would assume leadership.”

Na’im said, “Abu Du’a al-Ansari’s death and that of 45 leaders in the group is a powerful blow to the organization, for the killing of [core] cadres is a humiliating loss to any jihadi group. Building jihadi cadres takes a long time, and uncovering another cadre and training it is not a simple matter. It will take many years.”