What's behind uptick of attacks in Cairo?

A spate of terror attacks in Egypt could have to do with boosting the morale of Muslim Brotherhood supporters in addition to the upcoming verdicts and sentencing involving former President Mohammed Morsi and other Brotherhood figures. 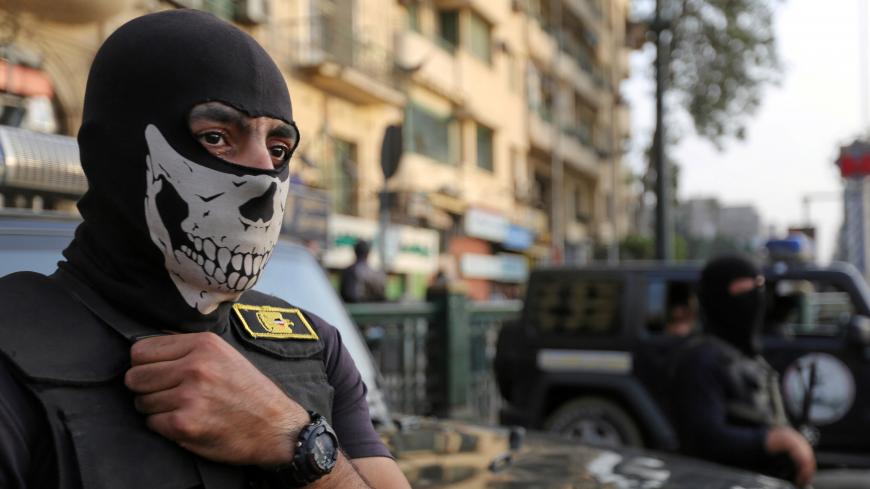 A masked member of the security forces is pictured as Tahrir Square is secured in Cairo, Nov. 11, 2016. - REUTERS/Mohamed Abd El Ghany

CAIRO — While Egypt’s northern Sinai region has been associated with terrorism in recent years, there are concerns the violence could be spreading to Cairo. The Cairo governorate — which includes Egypt’s capital and its suburbs, and is highly populated — has witnessed five terrorist attacks in the span of less than three months, from Aug. 6 until Nov. 4.

In the third such incident, Brig. Gen. Adel Ragaie was gunned down in front of his house Oct. 22 in a Cairo suburb in an attack claimed by a group called Lewaa al-Thawra (Revolution Brigade).

On Oct. 28, there was a terrorist attack against a security patrol on the Suez bridge street. On Nov. 4, Judge Ahmad Abu al-Fotouh, one of the judges in the trials against ousted President Mohammed Morsi, survived an assassination attempt with IEDs.

These operations are similar to the ones carried out in 2013, 2014 and 2015. In December 2013, an explosion occurred at the Dakahlia Security Directorate; another took place in January 2014 in the Security Directorate of Cairo. This is not to mention the June 2015 assassination of Attorney General Hisham Barakat, who was killed in a bombing of his motorcade.

These operations were linked to a dangerous organization known as Ansar Bayt al-Maqdis, later to be called Wilayat Sinai after it pledged allegiance to the Islamic State (IS).

However, the recent attacks have been associated with newly emerged movements and organizations, such as the Hasm movement and Lewaa al-Thawra, which have less experience and savvy than Wilayat Sinai.

Retired Maj. Gen. Khaled Moutaweh told Al-Monitor that there are some indications suggesting a lack of experience within these groups. For instance, in the assassination attempt against Gomaa, a large number of bullets were fired and yet the target was missed. Moutaweh also underlined a lack of capabilities, as bullets were used instead of explosive materials, which he said has been Wilayat Sinai's signature attack and the most effective attack in general.

Meanwhile, retired Maj. Gen. Mohammed Nur al-Din, a former assistant to the interior minister and a security expert, told Al-Monitor that the Hasm movement and Lewaa al-Thawra are likely affiliated with the Muslim Brotherhood, as evidenced by the latter's announcing that the assassination of Ragaie was to avenge the Oct. 3 killing of Muslim Brotherhood leader Mohammed Kamal. Kamal was a member of the movement’s guidance office, in charge of the major cells in the Brotherhood.

It is worth mentioning that the emergence of Lewaa al-Thawra and the high-tempo operations of the Hasm movement happened in tandem with the resumption of fierce attacks by Wilayat Sinai, most notably one on a security checkpoint in northern Sinai on Oct. 14. The attack killed 12 soldiers in the armed forces. Sinai also witnessed other major attacks, which caused the death of prominent leaders in the armed forces, including Col. Rami Hassanein, the commander of Brigade 102, and Brig. Gen. Hicham Mahmoud Abu al-Azm.

Nur al-Din said, “One ought to pay attention to the announcement of Mohammed al-Baltagy, a leader in the Brotherhood, during the Rabia al-Adawiya protest, as he said that the terrorist attacks will continue until the return of Morsi to power. The Muslim Brotherhood is carrying out operations under the names of different groups because it wants to create political distance so it can move about easily in Turkey and Europe and deal with political systems without being questioned about its associations with terrorist activities."

Nur al-Din believes there are three reasons behind the new attacks. “This is an attempt to boost the morale of terrorist organizations and members of the Brotherhood. It is also a bid to intimidate judges before pronouncing final judgments on Morsi and Brotherhood leaders, as judgments have already started to be issued. Finally, these attacks aim at disrupting the economic reform process in Egypt,” he said.

Retired Maj. Gen. Hisham al-Halabi, a consultant in the Nasser Military Academy and member of the Egyptian Council of Foreign Affairs, told Al-Monitor, “With the resumption of heavy attacks, terrorist groups are trying to establish themselves in the Egyptian arena.”

He said one reason for the intensification of such operations is their relative ease compared with attacks against military targets or sites, saying, “There is no 100% [protection] guarantee anywhere in the world. For example, American security could not protect President John F. Kennedy from assassination, despite the substantial capacities of US security services compared with Egyptian security services. Moreover, security services in France, the United States and Turkey were unable to repel the frequent terrorist attacks launched recently. Therefore, terrorist organizations benefit from the security services’ inability to secure all streets and provide protection to all prominent figures to carry out their operations.”

Halabi said that as a result of the attacks, “Citizens are becoming more supportive of the security services and armed forces, despite the terrorist organizations’ attempts to break the trust between the citizen and the state. Moreover, these operations are further boosting the armed forces, police and intelligence services’ determination to avenge their colleagues and eradicate terrorism.”