Battle may be brewing in Sinai between al-Qaeda, IS groups

As Egypt continues efforts to suppress violence in the Sinai Peninsula, a small band of al-Qaeda followers is looking to grow and challenge both Egypt's army and Islamic State loyalists. 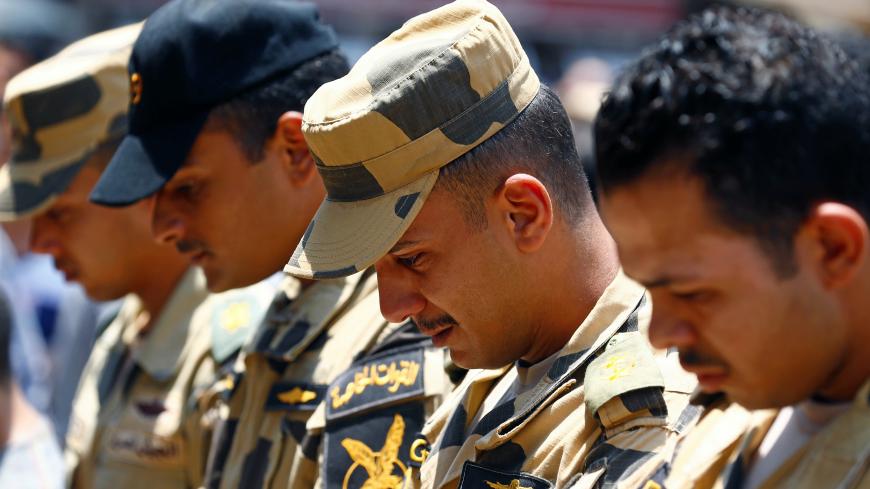 Egyptian army officers react during the funeral of officer Khaled al-Maghrabi, who was killed during a suicide bomb attack on an army checkpoint in the Sinai Peninsula, in his hometown Toukh, al-Qalyubia governorate, north of Cairo, Egypt, July 8, 2017. - REUTERS/Mohamed Abd El Ghany

It looks like affiliates of the Islamic State (IS) and al-Qaeda could go to war with each other in the Sinai Peninsula, though at this point the battle would be lopsided.

In an audio recording released Nov. 11, al-Qaeda adherent Jund al-Islam declared war on much larger Wilayat Sinai, which is associated with IS, and claimed responsibility for the Oct. 11 attack on a Wilayat Sinai vehicle that killed the four passengers. Jund al-Islam is vowing to eradicate Wilayat Sinai members if they do not repent and abandon what it calls “Baghdadi law,” which it says violates Sharia in part because it targets civilians and fellow Muslims.

Though no group has come forward yet, Wilayat Sinai is a top suspect in the Nov. 24 bombing and shooting attack on a Sinai mosque that killed more than 300 people and injured at least 100. Area villagers reported Wilayat Sinai had threated them a week before the attack.

Jund al-Islam also declared war on the Egyptian army, which it described as an “apostate.”

Jund al-Islam first gained notice, briefly, in Sinai on Sept. 11, 2013, when it claimed responsibility for the suicide bombing attack on the military intelligence headquarters in Rafah, Egypt, that killed six soldiers and wounded 17 others. This was the only terrorist operation claimed by Jund al-Islam in Sinai.

So where has Jund al-Islam been since 2013? Nowhere, really, until it began receiving a small influx of disillusioned members of Wilayat Sinai.

Wilayat Sinai began as Ansar Bayt al-Maqdis in 2011, a group that espoused the same basic ideologies as al-Qaeda. But it gradually became more extreme, influenced by IS. In 2014, Ansar Bayt al-Maqdis pledged loyalty to IS and changed its name to Wilayat Sinai. Some of its members wanted no part of the transition and defected to Jund al-Islam (Soldiers of Islam).

A resident of the town of Shabanah told Al-Monitor she knew of such a member.

“In mid-2014, Ansar Bayt al-Maqdis terrorist organization attacked the house of a neighbor known [in the village] for his hard-line Salafist-jihadi ideology. They searched his house, and we heard them threatening him," she said on condition of anonymity.

“A few days later, the Egyptian army raided the house of our Salafist neighbor but did not find him. He had disappeared, and we later found out he had defected from Ansar Bayt al-Maqdis after refusing to pledge allegiance to IS."

Abu Ahmad al-Sawarka, an expert on jihadi groups in Sinai, told Al-Monitor that some 20 people defected from Ansar Bayt al-Maqdis around that time, for that same reason.

According to Sawarka, those who split from Ansar Bayt al-Maqdis and joined Jund al-Islam remained loyal to al-Qaeda, because they believed IS relies on extremism in killing civilians, breaking the tenets of jihad.

Asked why Jund al-Islam kept such a low profile, he said the group lacks members and equipment and has been weakened by Wilayat Sinai, which declared that Sinai is subject to IS’ influence and whoever does not respect that will be targeted.

A researcher who focuses on Sinai and the affairs of armed groups there told Al-Monitor on condition of anonymity that both the disappearance and recent reappearance of Jund al-Islam are based on guidance from al-Qaeda's No. 1 man in Egypt, Hisham Ashmawi, aka Abu Omar al-Muhajir. He is an elite officer who was dismissed from the Egyptian army for embracing jihadi ideology, and who split from Ansar Bayt al-Maqdis, pledging allegiance to al-Qaeda.

The researcher, based on his study of the situation, said Ashmawi asked members of the ragtag group to disappear for a while and develop their combat capabilities to be able to fight IS. Ashmawi and some dissidents went to Libya to train and recruit before returning to Egypt, while others hid in the desert of central Sinai.

The source suggested that Ashmawi is seeking the return of al-Qaeda to Egypt through small groups spread in different areas: Jund al-Islam in Sinai; Ansar al-Islam in the Western Desert, which carried out an Oct. 21 ambush of police in Giza province; and the Mourabitoun, who are Salafist jihadis affiliated with al-Qaeda and are spread across Egypt.

Also, the researcher pointed out that Jund al-Islam's threat of eradicating IS in Sinai is blown out of proportion, given the former's small size. The real purpose behind the statement, he said, is to attract new fighters, rebuild the group and return to the battlefield in Sinai.

Why now? The researcher said Jund al-Islam saw that Wilayat Sinai was grappling with difficult conditions as a result of IS’ defeat in Iraq and saw this as an ideal time to stage a comeback. Also, he said, Wilayat Sinai has suffered heavy losses over the past four years at the hands of the Egyptian army and has lost members to the Tarabin tribe, one of the strongest tribes in Sinai. Add to this the siege imposed on the organization by Palestinian movement Hamas that, with the Egyptian army, prevented smuggling operations and funding from reaching IS and banned Gazan fighters from moving in and out of Sinai.

The Jund al-Islam statement shows the group is trying to attract Sinai citizens who are sick of the daily violations, slaughter and torture committed by Wilayat Sinai. “There is conclusive proof of attacks committed by … the Wilayat Sinai group against Muslims in Sinai,” the statement said.

The group also hopes to recruit citizens who have fallen prey to the Egyptian army’s violations, especially those who were forcibly displaced from Rafah. The statement said, “The tyrants displace the people of Rafah while the apostates erect checkpoints at every corner of Sinai.”

The group wants to attract Palestinian fighters and people who are hostile to Israel by saying, “The Jews are bombing our residents without any deterrents."

So far, developments in Sinai indicate that Jund al-Islam is still a weak group, but its latest statement may change the equation if it succeeds in its campaign to attract followers.