Egypt's Sinai Peninsula may be in store for more terrorism as the latest attack that left more than 300 people dead at al-Rawda Sufi mosque could be a sign of things to come from militant groups in the area. 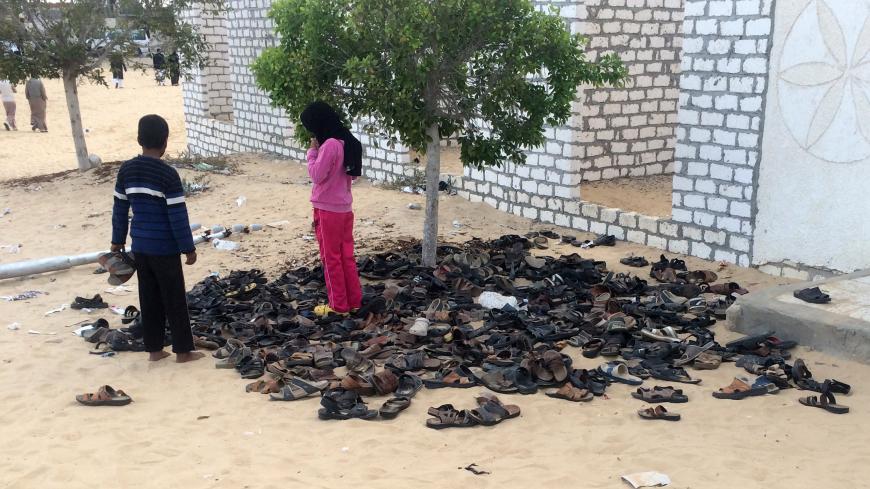 Egyptian children stand near a pile of footwear belonging to the victims of the attack that targeted al-Rawda Mosque near the North Sinai provincial capital of El-Arish, Egypt, Nov. 25, 2017. - STR/AFP/Getty Images

It was a nightmare scene — the worst in Egypt’s modern history. Over 300 civilians, including 27 children, died and more than 100 were wounded in a terrorist attack that targeted a mosque in the Bedouin village of al-Rawda, 40 kilometers (25 miles) west of el-Arish, the capital of North Sinai province.

Residents say that most of the village’s men were killed in the attack, which they described as a massacre bordering on genocide. The village is home to around 2,000 people, most of them from al-Jarirat tribe, part of al-Sawarka tribe, the peninsula’s second biggest.

Witnesses from the village told Al-Monitor that five four-wheel-drive vehicles carrying around 25 gunmen in military clothing, armed with machine guns and black flags similar to that of the Islamic State (IS), arrived at the mosque where most of the village men were gathered for Friday prayers on Nov. 24.

The gunmen separated into groups. One group opened fire on worshippers through the windows of the mosque, while another one set fire to their cars outside to prevent people from fleeing. A third group monitored the surrounding roads, killing village residents headed for the mosque and preventing ambulances from reaching the wounded.

One resident who escaped the massacre said he was saved by divine providence as bodies had piled up on top of him.

“Minutes after the Friday sermon, there was a sudden rain of bullets through the windows of the mosque and shouts of ‘Allahu akbar’ [God is greatest] from outside,” the resident said, asking to remain anonymous. “I didn’t understand what was happening. Worshippers started falling to the ground, and there was blood everywhere. The smell of blood was very strong and made me feel nauseous. The bodies of my relatives, who had been praying, fell on top of me. Children yelled from the pain of the bullets that had gone into their little bodies.”

In a voice wracked with pain, he continued, “I lost control of my body because the corpses had piled on top of me, but I could see what was happening from [underneath] them. The only obstacle to my vision was the blood coming from the bodies on top of me. Every time I closed and opened my eyes I could see worshippers trying to escape through the windows, but the gunmen shot them in their heads.”

“A few minutes later, the gunmen came into the mosque and shot the heads of worshippers who were already dead,” he said. “The goal was to finish us off; it was terrifying. Every time I heard a gunshot I felt that I was dying again.”

Residents said the blood covered the entire mosque and outside as far as the street. The attack lasted half an hour, but that had not been enough blood for the gunmen, who went to nearby houses and shot at their residents, shouting “Allahu akbar” and “don't leave anyone alive.” Witnesses said the accents of some of the attackers indicated that they were Sinai Bedouins, but the majority were not Egyptians.

No group has so far claimed responsibility for the massacre, but the main suspect is Wilayat Sinai, an IS branch, according to a researcher on Sinai and armed groups who asked not to be named. “Everything points to Wilayat Sinai being the perpetrator. The way they killed people is similar to the massacre of civilian truck drivers as they were transporting production materials to el-Arish cement factory owned by the army in central Sinai,” he told Al-Monitor.

The researcher added that Wilayat Sinai has not announced it was responsible for the truck driver killings, but it did take responsibility for the killing of a senior army officer accompanying them. This suggests that the group may not claim the mosque massacre.

In another indication that Wilayat Sinai was behind the mosque attack, residents found remains of large amounts of ammunition around the mosque bearing the initials of the Egyptian army. Wilayat Sinai is the only group that has been able to capture weapons from Egyptian military bases that it has attacked in Sinai, something it has frequently announced.

“To start with, we need to understand the reasons for the massacre,” the Sinai researcher said. “First is to spread fear among the local population, especially after [Wilayat Sinai] came close to defeat because Sinai residents were cooperating with the army. Second is to make a show of strength to the group’s supporters after the defeats IS has suffered in Syria, Iraq and Libya, in the context of its desperate need for fighters after the Egyptian army — in cooperation with Hamas — cut off the flow of new fighters from Gaza.”

As for the jihadis’ hesitation in claiming the attack, the researcher said that “for them, it is not important whether they announce responsibility or not. They have already achieved their goals as far as their supporters are concerned. They have gained prominence around the world; they appear more terrifying than ever in an attempt to force the people of Sinai to support them and to dominate them as well as sowing fear among anyone who thinks of challenging them. I also believe that they have left themselves room to deny responsibility if need be.”

There have been many theories on why al-Rawda Mosque was targeted. Some residents said the attack was related to threats by Wilayat Sinai members against village residents in recent months that they would be targeted if they continued to inform the army about the group’s movements.

Residents say that Wilayat Sinai terrorists have tried from time to time to place bombs and carry out attacks against military convoys that periodically pass near the village on the international road leading from the Egyptian mainland through North Sinai, but these operations failed because village residents informed the security forces.

One survivor of the attack said in a video posted Nov. 24 on a local Facebook page that he heard one of the attackers saying, as he opened fire on worshippers, “This is the punishment of whoever humiliates the mujahedeen [holy warriors].”

A local journalist who asked not to be identified told Al-Monitor the attack happened because the village [residents] belongs to a Sufi movement that believes in self-purity as a form of worship and decries violence and terrorist ideology. IS sees the village’s residents as heretics and enemies of the jihadis.

“Sufism is one of the components of Ahl al-Sunnah [Sunni Islam] and not a separate doctrine, but Wilayat Sinai thinks that anyone who is not with it is against it — even those who follow the Salafist-jihadi teachings of al-Qaeda,” the journalist said.

In December 2016, IS’ al-Naba magazine threatened to destroy al-Rawda Mosque as it had embraced the Jaririya Sufi order, the most common form of Sufism in Sinai and the one IS sees as closest to the “oppressive regime” — the Egyptian government.

According to the magazine, an "emir" of the Wilayat Sinai morality police said the organization’s aim was to destroy the mosque. “We say to all Sufis, leaders and followers in Sinai and beyond that we will not allow Sufism, particularly in Sinai and across Egypt in general. Know that we see you as heretics and your blood as spillable and sullied.”

Sinai residents say that dozens of those who were killed in the mosque do not belong to any sect. They were there for Friday prayers in the village’s only mosque. Some 135 of them had fled the clashes between the Egyptian army and IS in Sheikh Zuweid and Rafah. Another 30 were children who had no idea about Sufism or any other religious categorization.

“This organization is brutal; it does not distinguish between children and adults or between the innocent and the guilty,” said Salmi, a resident of Bir al-Abed, 30 kilometers west of al-Rawda. “It believes that whoever is not a killer like it is a heretic. It has no hesitation in killing children because it believes that children will grow up to reject its rotten ideology.”

After the massacre, Egyptian President Abdel Fattah al-Sisi promised to respond with “brutal force” and announced that a massive memorial would be built in al-Rawda.

“We don't want a monument; we want our children to be treated in humane hospitals,” one said. “Our wounded are still lying in hospitals in el-Arish and Ismailia without being treated.”

But many families of the victims are angry, saying they did not receive the appropriate treatment. “We don't want a monument; we want our children to be treated in humane hospitals,” one said. “Our wounded are still lying in hospitals in el-Arish and Ismailia without being treated.” He said some still had bullets in their bodies at the time of writing on Nov. 27.

Another said, “The terrorists continued to attack the village for about an hour, and the state did not come to protect us, despite the army having aircraft that would need five minutes to reach us and take out the killers. There is an army base minutes away from us, but they did nothing. Is the state punishing us because we love Egypt, respect the law and reject terrorism?” Sinai residents prefer not to give their names for fear of being targeted by terrorists or punished by the Egyptian government, which has imposed a media blackout on Sinai.

Mansur Abu Garir, the brother of one of the victims, wrote on Facebook Nov. 25, “No condolences. Have you ever seen an entire tribe in mourning? Mourn the old men who refused to take up arms [to fight IS] because they were scared of a civil war. Mourn the old men and their entourage, the official, the minister, the military governor and the governor.”

The al-Qaeda-linked Jund al-Islam group decried the massacre. The group's statement appears to be an attempt to create a popular base for itself among Sinai residents and to win over people bitterly angry at both IS and the Egyptian army, to utilize them to build its own ranks and make a comeback in Sinai.

Researchers and experts believe that Sinai is heading for more violence as Wilayat Sinai carries out increasingly barbaric attacks, al-Qaeda attempts to make a comeback and the Egyptian government continues to marginalize the peninsula’s residents.