Israel 'will not blink' on Iranian missiles

The Israel Defense Forces set new red lines for Iran; Erdogan still waiting for Russian dividend on Kurds; Russia expands use of private military companies in Syria; the Islamic State and al-Qaeda at war in the Sinai Peninsula. 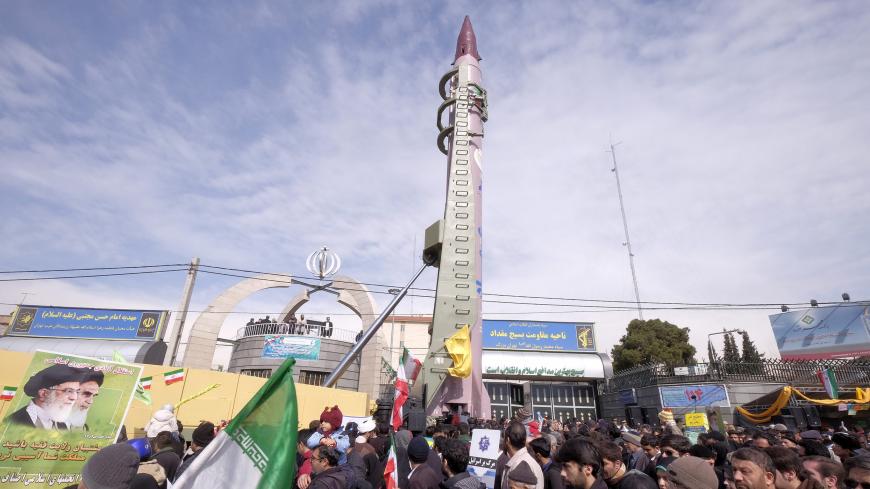 The Iranian-made Emad missile is displayed during a ceremony marking the 37th anniversary of the Islamic Revolution, in Tehran, Iran, Feb. 11, 2016. - REUTERS/Raheb Homavandi

Ben Caspit writes that “Israel is considering the possibility of reconfiguring and strengthening its unwritten red lines, which have set the ground for its military activity in the region over the past few years. It is even investigating the possibility of launching a far-reaching preventive strike to interfere with future Iranian efforts to establish factories for the manufacture of precision rockets and missiles in Syria or Lebanon, as well as to prevent Iranian military bases from popping up there.”

“As always,” Caspit adds, “the overall alarmism [about Iran] originates with the political leadership and decision-makers, chief among them Prime Minister Benjamin Netanyahu, and less from the military brass.”

What disturbs Israel’s military leaders most, according to Caspit, is “the Iranian 'Precision [Missile] Project,' intended to provide Syrian President Bashar al-Assad and Hezbollah Secretary-General Hassan Nasrallah with the capability to manufacture their own rockets and missiles, which could strike within dozens of meters of strategic targets.”

He continues, “As one top Israeli minister told Al-Monitor on condition of anonymity, 'For that, we would need to consider going to war. That should be a red line flashing brightly at us. All the regional decision-makers must then take into consideration that Israel will not blink, and that it will do everything it can to prevent its enemies from obtaining the capacity to harm it, its economy, its air force bases and other sites with precision strikes. Period.'”

Cengiz Candar writes, “All those who saw the gradual Turkish-Russian rapprochement as a tactical move of President Recep Tayyip Erdogan to reflect his displeasure with Washington’s policies were mistaken. They do not grasp the new power configuration after the July 15, 2016, coup attempt. There is a growing conviction that Erdogan is either a figurehead or at most the spokesman of the coalition of neo-nationalists, traditional nationalists and Muslim nationalists. All components of this new power configuration are anti-West and staunchly Eurasianist. Eurasianism as a foreign policy school in Turkey is known for being pro-Russia, pro-Iran and ultimately pro-China against Turkey’s formal and institutional bonds with the Western world, ranging from NATO to the European Union (EU).”

He adds, “Therefore, it is probably a delusion to think of Erdogan’s flirting with Russians as a tactical move and that he is trying to use this as leverage against Washington and the EU."

“Yet, while the Kurdish issue is the driving force of Ankara’s foreign policy,” Candar writes, “Russia has not provided much help on the issue. A day before the Sochi summit, Putin received Assad in Sochi with fanfare. This signals that Assad will be the legitimate authority of Syria and that this should be a part of any peace deal. … Turkey’s — namely, Erdogan’s — Syria policy looks more than ever like it is being squeezed between the American hammer and the Russian anvil. The Kurdish issue is only one of the catalysts to indicate Turkey’s weakened posture, particularly in Syria, the Middle East and the world.”

Metin Gurcan reports, “Valery Gerasimov, chief of the Russian General Staff, attracted public attention when on Nov. 23 he said Moscow plans to withdraw some of its troops from Syria by the end of the year, with armed clashes becoming less frequent and negotiations proceeding toward resolution of the civil war. To avoid potential security losses or retreats, however, Russia will outsource the work to private military companies (PMCs) with tactical warfare capabilities equivalent to modern militaries.”

Gurcan explains, “The use of Turkic military contractors with Shiite backgrounds gives Moscow a strategic edge in Syria, because these contractors can more easily blend in with Syrian government forces. Their Shiite identity also provides a unifying factor in the fight against Salafi jihadism. Of note, Juma Namangani, a former Soviet paratrooper of Sunni Uzbek origin, had served in Afghanistan, and while there adopted Salafi jihadism. In 1998, Namangani founded the radical Islamic Movement of Uzbekistan and declared jihad against the Uzbek government to establish Sharia there. His transformation has surely not been lost on the Russians.”

“In short,” Gurcan concludes, “parallel to Moscow's withdrawal of some of its troops from Syria, it is highly likely to look for opportunities to deploy more PMCs. The weakness of Syrian security forces, combined with Russia's need to downsize its overtasked military in Syria, has left security gaps in the fragile country. Filling these gaps with PMCs is a plausibly deniable, economically feasible, politically viable, sustainable and flexible option for Moscow. In addition, unlike relying on local warlords, armed groups or criminal networks, as in Ukraine and Libya, in Syria using PMCs run by Russian ex-special operations personnel offers Moscow greater command control and combat effectiveness.”

Is al-Qaeda gaining ground in Sinai?

“It looks like affiliates of the Islamic State (IS) and al-Qaeda could go to war with each other in the Sinai Peninsula,” an Al-Monitor correspondent in Sinai reports, “though at this point the battle would be lopsided.”

“In an audio recording released Nov. 11, al-Qaeda adherent Jund al-Islam declared war on much larger Wilayat Sinai, which is associated with IS, and claimed responsibility for the Oct. 11 attack on a Wilayat Sinai vehicle that killed the four passengers. Jund al-Islam is vowing to eradicate Wilayat Sinai members if they do not repent and abandon what it calls ‘Baghdadi law,’ which it says violates Sharia in part because it targets civilians and fellow Muslims,” the correspondent reports.

“Though no group has come forward yet,” the correspondent continues, “Wilayat Sinai is a top suspect in the Nov. 24 bombing and shooting attack on a Sinai mosque that killed more than 300 people and injured at least 100. Area villagers reported Wilayat Sinai had threated them a week before the attack.”

“A Jund al-Islam statement shows the group is trying to attract Sinai citizens who are sick of the daily violations, slaughter and torture committed by Wilayat Sinai. … The group also hopes to recruit citizens who have fallen prey to the Egyptian army’s violations, especially those who were forcibly displaced from Rafah. The statement said, 'The tyrants displace the people of Rafah while the apostates erect checkpoints at every corner of Sinai.'”

The correspondent adds, “The group wants to attract Palestinian fighters and people who are hostile to Israel by saying, 'The Jews are bombing our residents without any deterrents.’ So far, developments in Sinai indicate that Jund al-Islam is still a weak group, but its latest statement may change the equation if it succeeds in its campaign to attract followers.”

by Murielle KASPRZAK and Joseph SCHMID | AFP | May 26, 2022
END_OF_DOCUMENT_TOKEN_TO_BE_REPLACED