"Creativity is not limited by circumstances," said one of the speakers at TEDx University of Palestine, where talented Gazans recently found a platform to voice their ideas. 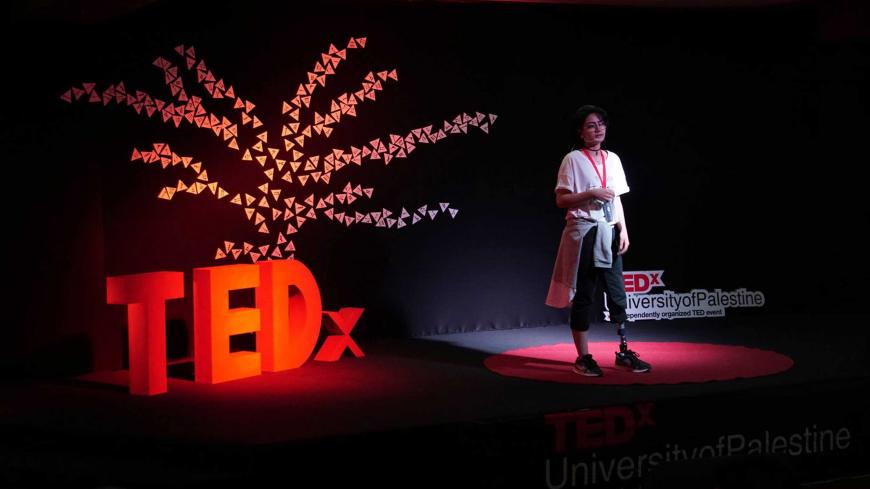 One of the participants in the University of Palestine's TEDx event takes to the stage, Al Zahra, Gaza, Sept. 24, 2017. - Facebook/TEDxUP

Al-ZAHRA, Gaza Strip — At the conference hall of the University of Palestine in the Gaza Strip, 11 local speakers shared their inspirational stories and experiences in various fields, from technology to entertainment. The Sept. 24 event was part of the TEDx program, a global activity that aims to create a platform for people to share their creative and innovative ideas with an audience.

TED has been seeking to expand worldwide and has been granting licenses since 2006 to universities and institutions around the world to host independently run events. So far, more than 130 countries have hosted TEDx events.

The University of Palestine held its first TEDx event on Sept. 24. The university's administration said in a statement on its website that the event aims to spread inspirational ideas and that TEDx is a "local, self-organized event that brings people together to share a TED-like experience."

Esraa Yaseen, the coordinator of the TEDx Palestine event, told Al-Monitor, “In the Gaza Strip, there are a lot of creative people with inspiring ideas who need global platforms to express themselves. Their ideas can change the stereotypical image of Gaza that is based on death, destruction and poverty. [The talks] can shed light on the new image of Gaza and prove that Gazans have ideas and capacities and can be part of such global events.”

“We want to deliver a message to the world that Gaza — which was devastated by three Israeli wars and by the ongoing blockade and whose residents still suffer pain, deprivation and unemployment — is embracing visionaries and people with innovative and distinctive ideas,” she said.

She explained that choosing the speakers for the event took a great deal of time. They first screened candidates during the workshops they held to introduce the public in the Gaza Strip to the concepts of TED and TEDx, and then a jury from among the faculty and the administration was formed to select presenters based on their innovative ideas and their ability to address and engage with an audience.

On Sept. 24, the presenters took to the stage to share their ideas and talk about their experiences.

The 11 speakers covered a variety of topics, which were received by the audience with laughter, tears and sometimes shock, or by a standing ovation.

Journalist Mumin Qreiqei, 29, sat on the stage in his wheelchair telling the audience how he lost his legs while covering the Gaza war in 2008-2009, and how he continues to work as a journalist documenting the crimes of Israel against the Palestinians.

He said, “We do not need feet to make our dreams come true. All we need is courage. After I lost my legs, I took the decision to follow my dreams with a strong will and determination. I followed my passion for journalism and my desire to document the crimes of Israel and expose them to the world. Creativity is not limited by circumstances.”

Qreiqei, who presently freelances as a photojournalist for a number of international news agencies, told the audience that his camera is his girlfriend and his life companion, and that it has been with him ever since his injury.

Salah al-Saadi, 35, talked about the first scientific laboratory in Gaza City, which he launched in 2016 and called the Golden Lab, for recycling environmental waste and using the recycled output to preserve the environment.

He said, “Ideas can be materialized thanks to ambition and perseverance. My project was a small idea that I had about 10 years ago. My friends used to make fun of me when I talked about how I wanted to preserve the environment by recycling waste, but I turned a deaf ear to their comments. I achieved my ambition by insisting on success, and my project came to light a year ago.”

Saadi gathered interesting scientific information and materials on recycling waste and using the recycled products to preserve the environment and to conduct experiments that could be applied in the future in Gaza. He stressed that he is determined to achieve his ambitions and goals.

Another speaker, Hiba Shaheen, talked about her experience as the first female equestrian in the Middle East with a prosthetic foot. Shaheen, 17, has only one leg as she was born with a rare birth defect. Some call her the “horse-riding prodigy.”

“Sorrow is a fruit. God does not make it grow on limbs too weak to bear it,” she said, as she began her talk. “I challenged my disability and wanted to change society's perception of disabled persons. Thanks to my determination I proved to the world that a disability does not need to stand in the way of creativity.”