Five women were selected to showcase their eco-friendly project at an exhibition in Gaza organized by the Women's Affairs Center to raise awareness on climate change and the need to protect the environment. 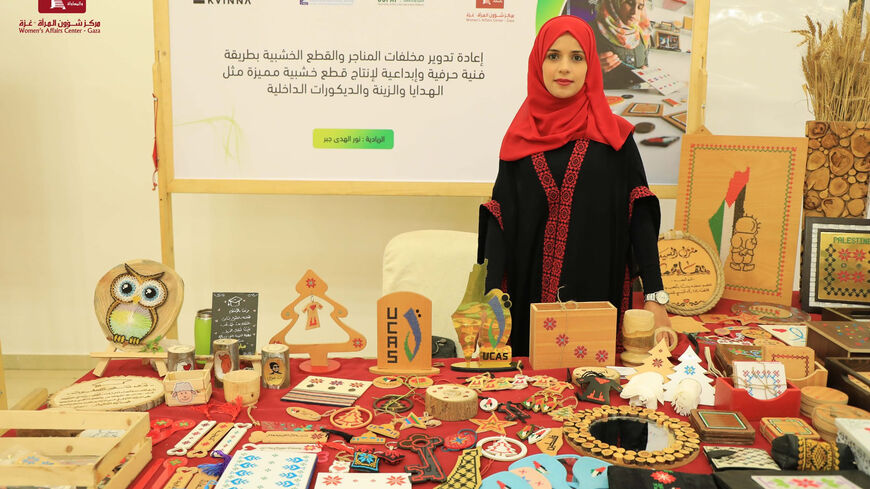 A group of Palestinian women has recently showcased several products they manufactured through waste recycling that are safe for human health and the environment.

Plant nurseries, natural hair and skin care products, natural organic fertilizers, art pieces created from wood residues, and fruits and vegetables that were dried using renewable energy were among the many products presented by the women at the “Environmentally Friendly Women’s Initiatives” exhibition held in Gaza City Sept. 7.

Five women running green, environmentally friendly projects in the Gaza Strip showcased their projects in the exhibition organized by the Women's Affairs Center in Gaza, in cooperation with several Palestinian institutions, at the Shalehat tourist resort in Gaza City.

The exhibition aimed to bring about positive change to the environment and climate change, through projects that are the source of livelihood of many women in the Gaza Strip, which is reeling under difficult economic conditions.

According to data published by the Palestinian Central Bureau of Statistics in March, the unemployment rate among women participating in the labor force (both in the West Bank and Gaza Strip) reached 43% compared to 22% among men in 2021. Unemployment rates reached 53% among young people with an intermediate diploma or higher — 66% for women compared to 39% for men.

At the exhibition, Noor al-Huda Jaber, 31, who graduated from the Islamic University of Gaza in 2013 with a diploma in psychological and educational counseling, presented her project that she called the “Noor Initiative for Recycling.”

She told Al-Monitor, “The project is based on optimal use of the leftover wood from the furniture industry. Factories normally burn this wood, causing the emission of harmful gases that exacerbate global warming and climate change."

Jaber said, “Unlike thousands of unemployed graduates in Gaza, I did not wait for a job opportunity that corresponds to my university major. I immediately started thinking about implementing my project that consists of using this leftover wood in a creative and distinctive way, and turn it into a product of real value by carving on it in a customized manner."

She noted, “I use the leftovers of plywood, beech husks and melamine to make etchings electronically through the AutoCAD program; I use a CNC cutting machine to pierce them, and then carve on them. I made and sold many wooden pieces such as accessories, wedding and occasion gifts, medals and other products.”

Jaber added that she also embroiders leather and plastic to make use of them rather than destroy them in order to promote environmental protection. These projects also constitute her main source of income.

Haneen al-Buraim, 27, called her project “Green Power in the Face of Climate Change,” which consists of an agricultural nursery that she established in 2012 despite the challenges and difficulties she faced, which included the destruction of her nursery by the Israeli forces during the Israeli war on Gaza in 2014.

She told Al-Monitor, “My project is based on practicing environmentally friendly agricultural activities to mitigate the deterioration of the production, agricultural and environmental situation by planting different types of seedlings inside empty plastic bottles and old pots and using them as agricultural basins instead of throwing them away. I also recycle damaged fabric and old clothes and transform them into cement that I pour into molds to create agricultural pots.”

Buraim said she wants to increase the production capacity of her agricultural nursery during the coming period by planting genetically modified natural agricultural seedlings that are highly efficient and safe for human health and the environment and that resist climate change. She noted that this project employ the largest possible number of people in the Gaza Strip and that she would provide these products to the consumer at reasonable prices.

Engineer Hanadi Abu Harbid, 23, is the mind behind the “Solar Food” initiative, which she said is based “on drying fruits, vegetables and herbs using solar thermal technology through an energy-saving and eco-friendly hybrid solar dryer. It controls humidity, heat and the number of operating hours, and it is the first of its kind in Palestine.”

She told Al-Monitor, “The device [that I created] aims to preserve the quality of agricultural products when dried, which are free of chemical additives, dyes and flavors. It is characterized by fast performance compared to other electrical devices, which consume large amounts of energy. The dryer helps in giving up traditional methods that use fossil fuels, which increase the emission of harmful gases to human health and the environment.”

Abu Harbid said, “The dryer allows crops to grow outside their season, since some crops only grow under certain conditions of high heat or extreme cold. Drying them makes them available all year, and the dried products are efficient, high-quality and comply with all food security requirements.”

Coordinator of the exhibition Etimad Washah told Al-Monitor, “The exhibition includes environmentally friendly women's initiatives to mitigate the phenomenon of climate change, reduce pollution rates and promote environmental awareness, amid the environmental pollution that has affected the soil and air in Gaza following the six Israeli wars.”

She explained, “The initiative featured more than 150 pioneering projects by women. Five of them were selected [for the exhibition] based on several considerations, including the extent to which these initiatives are able to mitigate climate change and how encouraging they are for society to raise awareness of the importance of eco-friendly projects that play a key role in protecting the community and the environment.”

Washah added, “Overpopulation in the Gaza Strip requires a serious quest for projects that save water and recycle waste to reduce carbon emissions.”