The Suez Canal Authority announced a plan to shift the Suez Canal into an eco-friendly canal that relies on renewable energy to preserve the environment and encourage environmentally friendly ships. 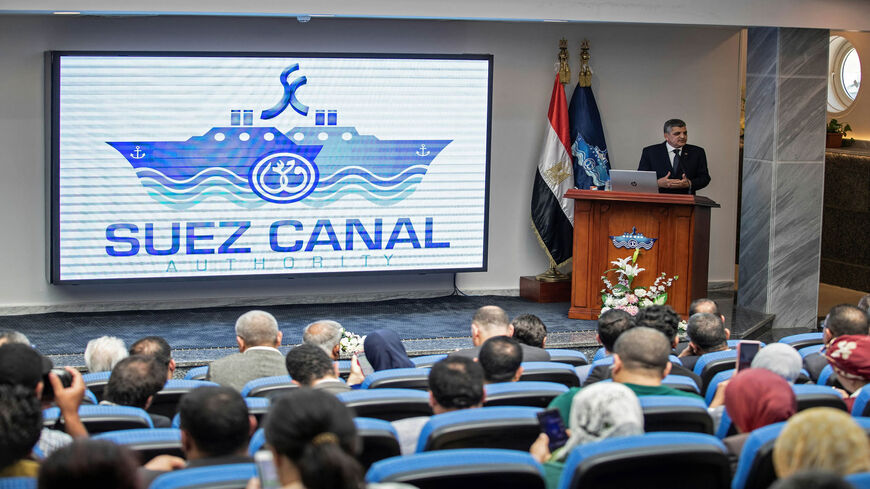 Osama Rabie, chairman of the Suez Canal Authority, speaks during a press conference after the release of the Panama-flagged MV Ever Given container ship, in the canal's central city of Ismailia, Egypt, July 5, 2021. - Mahmoud Khaled/AFP via Getty Images

In this context, the authority recently announced its plan to declare the canal as a “green canal” next year. In a TV interview Dec. 14, SCA head Lt. Gen. Osama Rabie said, “The SCA launched an initiative of 16 renewable energy monitoring posts as part of its digital transition plan, and the Suez Canal will be declared as a green canal in 2023.”

During a Dec. 13 meeting, Egyptian President Abdel Fattah al-Sisi discussed with Rabie the SCA’s efforts to assume its international environmental responsibility, in addition to its decision to give incentives to transiting ships’ operators that follow environmentally friendly standards that contribute to reducing carbon emissions.

This decision aims to encourage ships to use liquefied natural gas and various types of low carbon fuel, so that the Suez Canal shifts into a green canal that encourages and supports the preservation of the environment, a statement by the Egyptian presidency said following the meeting.

Sisi and Rabie also discussed ways to develop the energy system of the Suez Canal, where wind and solar renewable energy will be used to light up monitoring stations along the canal to reduce pollution.

On Dec. 21, 2021, Rabie said in a press interview, “The Suez Canal is supported by three of the most modern vessels that counter the effects of environmental pollution in the canal through modern equipment that disperses oil spills in the shipping lane, and then suck them through skimmers operated from vessels to protect the water from pollution caused by ships."

He continued, “A number of eco-friendly measures have been taken at the Suez Canal, and there are strict regulations in this regard, with the SCA preventing any container vessel or ship leaking oil or petroleum from entering the canal's navigational line. We also take periodic samples to measure and monitor pollutants in the water. As it is classified as the shortest shipping route, the ships would consume less fuel and therefore emit less toxic gas.”

On Jan. 3, the SCA announced the use of renewable energy to operate the 16 monitoring stations along the canal in order to reduce gas emissions as part of its green initiative.

In April 2019, the SCA announced the building of Egypt's first green port in East Port Said. The announcement came after the SCA signed a contract with SESCO Trans Egypt to design, build, manage and operate a multipurpose terminal at East Port Said port, with a technology that adheres to environmental requirements for a period of 30 years.

East Port Said Director Ali Assem told the press back then, “The contract consists of the construction of the East Port Said port berth in an integrated eco-friendly manner, and the port will be surrounded by vast green spaces to reduce the negative impact on the environment.”

Egypt has in recent years increased its green projects. On Jan. 10, the Egyptian Ministry of Planning and Economic Development announced an increase in the share of green projects to 30% of the state investment plan, and a 50% share in 2024-25.

Egypt has also adopted a plan to increase reliance on renewable energy sources and to create more green spaces in order to preserve the environment and deal with climate change resulting from pollution and fossil fuels. In May 2019, the government announced the formation of the National Council for Climate Change tasked with developing the state’s general policies in countering climate change.

In December 2020, the council’s high committee held its first meeting, headed by Madbouly, who called on the council to prepare a general strategy to confront climate change and to present its framework to the committee in its next meeting.

On Aug. 1, 2021, the committee held its second meeting during which Minister of Environment Yasmine Fouad presented the national strategy for climate change and its objectives.

She said, “The plan ensures the achievement of low emissions in various sectors, increasing [the share of] renewable and alternative energy sources in the energy mix, and preserving natural resources and green spaces.”

In November, Egypt will host the 27th session of the Conference of the Parties (COP 27) to the UNFCCC in Sharm el-Sheikh.

The environmental adviser at the Federation of Egyptian Industries, Mohamed al-Zarqa, told Al-Monitor, “The Suez Canal’s plan to rely on renewable energy, especially solar energy, and motivate ships to conserve the environment is a necessary step in light of the high pollution rates.”

He said, “It is necessary to reduce pollution in order to protect the Suez Canal from the environmental effects of shipping. The SCA has been keen to motivate these ships to preserve the environment.”

He noted, “The climate in Egypt has been significantly affected by the high pollution rates and the high dependence on fossil fuels. Therefore, the government is working to follow the transition plan to renewable energy, in the Suez Canal and all ports and projects.”

Egypt is increasingly relying on renewable energy in generating electricity. The Ministry of Electricity said in a statement on Nov. 23, 2021, “Egypt has developed a strategic plan that sets a renewable energy target of more than 42% by 2035 of the energy mix.”